Frank Lowy is widely credited as the man who fixed the mess that was Australian soccer. It’s a reputation that has given the shopping centre magnate incredible influence over the direction of the game in recent years. Yet his power could be on the wane, particularly if increasing calls to oust him come to fruition. […]

Frank Lowy is widely credited as the man who fixed the mess that was Australian soccer. It’s a reputation that has given the shopping centre magnate incredible influence over the direction of the game in recent years. Yet his power could be on the wane, particularly if increasing calls to oust him come to fruition.

Former Socceroo and SBS soccer analyst Craig Foster believes the game will not be able to prosper in Australia until Lowy hands it over. “The game is bigger than any individual, right? Why, then, does it not feel that way? To some, it feels more like Lowy’s game, not Australia’s, and this is a problem,” he wrote in The Age.

It was a bold move, which said a lot about how far soccer had come under his stewardship. Even Nicole Kidman and Elle Macpherson were on board to sell it. But the fact the bid only scored one vote, in what was widely criticised as being a pretty shabby process, shows how little influence the white-haired billionaire has on the world stage.

Lowy sought to put the blame elsewhere, such as on the increasingly dodgy FIFA executive committee. But that’s raised even more questions about how Lowy and the FFA could be so naive towards corruption in soccer.

“I think it is becoming evident to all of us that it was not a level playing field that we participated in and that seems to be coming through,” Lowy told Westfield’s annual general meeting earlier this year, alluding to the stench reeking from the process.

It’s the first time Lowy’s revered place in the game has been truly questioned. And Foster’s not the only one looking for answers. Disquiet with Lowy’s centralised management style has grown recently. And they’re tough questions to ask, given everything he’s done for the game.

Lowy’s intense focus on winning the World Cup led to him copping criticism from some quarters who believe he hasn’t put enough effort into growing the local side of the game. One of those people is former head of SBS Sport Dominic Galati, who plans on trying to usurp Lowy at the next FFA annual meeting.

“I’ve had a lot of support from people that are within the FFA, outside the FFA and if I didn’t I wouldn’t be here today,” he told Four Corners recently. “I believe that someone has to be a voice out there for the people that are passionate about this game; people are now afraid of what’s going on and I’m just doing it for them.”

Those concerns appear to have found some traction. Earlier this year sports minister Mark Arbib ordered a review into the state of the game by former politician Warwick Smith. Part of the review’s wide remit will look at the game’s corporate governance. The results of that review are expected some time before the end of the year.

Galati and others hope it will lead to the departure of FFA CEO Ben Buckley, a former AFL man and key Lowy appointee. That’s a demand which has gained traction in the wake of the World Cup debacle.

Former Socceroos goalkeeper Zeljko Kalac, ex-Socceroos coach Les Scheinflug and former A-League boss Archie Fraser were some of the names who argued for Buckley to fall on his sword not long after the World Cup embarrassment sunk in. There have been others calling for the same since.

At the World Cup’s dawn, Australia’s own bid is in turmoil 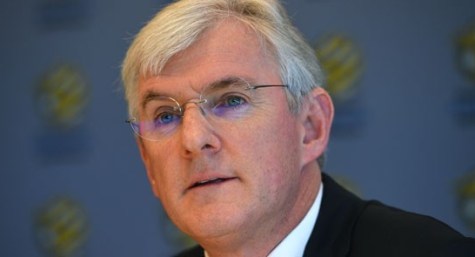 Mayne: how will Lowys handle board renewal at upcoming AGMs?