Rundle: among Occupy’s guy ropes, Anglicans in act of solidarity

Around the steps of the cathedral, the Occupy protest sprawls, its hundred or so tents arranged in rows, making tiny streets in the expansive paved yard.

“Bread of heaven, bread of heaven …” Down at the corner where St Paul’s Churchyard joins Fleet Street, a crowd has gathered. Around the steps of the cathedral, the Occupy protest sprawls, its hundred or so tents arranged in rows, making tiny streets in the expansive paved yard. Above the one and two-person many-coloured pods rise the larger units — the info tent, the media and food tent, and the largest of them all, like an old meeting hall, the “Tent City University” tent.

“Occupy London” has become a village within a city. Gathered thus around the cathedral, it has an early medieval air, but considered of itself it reaches back much further, to the settlements that predate Londinium, the city founded by the Romans to impose imperial order.

You don’t have to subscribe to romantic notions of village existence to feel that something free and easy is happening here. The churchyard is an amphitheatre of sorts, a broad semi-circle of honey-stone marking it off, filled with the usual half-dozen chain stores, Starbucks, etc. It is more sympathetic to the local area than the grey-slab offices it replaced, and also dead beyond recompense, too pallid and processed to even be derided as postmodernism. In the Tent City University, they’re debating the question of whether the protest is anti-capitalist or not. Hannah Roino is arguing for a “pragmatic ethical capitalism” focused on small businesses and enterprises — “what’s wrong with choosing the tastiest cake in the shop?” she says, her words carried in the Occupied Times, the eight-page daily paper the protest is producing.

On the pastiche-stone walls, the posters also speak — for the anarchist book fair, for solidarity with Occupy Bristol and Occupy Nottingham, nine-point plans, 20-point plans, hand-written arguments on pages torn from exercise books, posters for the Kurds, for the Palestinians, against vaccination — this one crossed out, with “anti-scientific bullsh-t kills kids” scrawled across it — notices of workshops in non-violent direct action, a class on crisis theory, and a meditation session. The crowd wandering through the streets of Occupy are young and old, dreadlocked, and punky, half-Wat Tyler, half-Tank Girl. Near a giant Monopoly board — the properties labelled as Greece, Spain, the NHS, the giant counters representing Goldman Sachs, the IMF, etc — a white reggae band is setting up, who look exactly as you would imagine.

But the crowd gathered at the busy corner of the Churchyard isn’t part of the Occupy movement. Gathered in a semi-circle, a high harmony rises from them, an Anglican hymn: “guide me O thou great redeemer, pilgrim through this barren land …”. It’s an Evensong service, attended by, well, by the type of people that Anglicans are — dowdily dressed, suburban people, in chain-store clothes, slightly shabby men, and grey-haired women, Asian students, and a couple of young fogeys, utterly sincere in tweed and muttonchop whiskers.

A heavyset reverend in a mauve vestment leads the service with gusto, following an apparently mundane reading from Acts, covering Paul’s escape from the Romans, to make a pointed message: “keep up your courage men and women! Paul had courage against Imperial Rome!” and then, to acknowledge the spitting evening rain “courage in the face of inclement weather!” The red double-deckers stack up on Fleet Street back to Ludgate Circus, tired people stream to the Tube, but the service goes on.

Four days ago, after initially welcoming the protesters, the management of St Paul’s announced that the occupation obliged them to close the doors of the cathedral for the first time since the Blitz. Somewhat undercutting the memory of national fortitude, they cited the phrase that has become the blood, sweat and tears of modern Britain — health and safety. Since wide pathways had been cleared, this was hard to understand, especially when the H&S report was released and mentioned the danger of tripping over guy ropes, etc. The Occupy London protest — which meets as a “general assembly” every afternoon — had bent over backwards to accommodate St Paul’s, consenting to panel fences to create a corridor leading from the fire exits to the street — yet now there was the problem of guy ropes.

The shouty tabloid media didn’t know what to say. The Daily Mail had roared that protesters had been the “first people since the Nazis to close down the cathedral”. Now its other favourite target, regulation gone mad, was in view. It didn’t know who to froth about more. What was going on?

What indeed? The Chancellor of St Paul’s, Canon Giles Fraser, allowed the protesters to establish Occupy London, after they were barred from Paternoster Square, where the stock exchange is. But the board of trustees is dominated by figures from the city, and they and the Bishop of London want the protesters to leave. Occupy met and issued a statement respectfully saying they were staying, while the church made noises about joining an injunction being issued by the local authority. News stories that the cathedral was losing £20,000 a day weren’t likely to move opinion; but the spectacle of people being unable to worship there was, and a stand-off was being manufactured.

But that was broken today, after a church organist, Kathryn Rose, organised a “flashmob Evensong” to be held outside the cathedral, and 70 people turned up. They could have gathered on the cathedral steps; they chose somewhere more modest. The first reverend to turn up took the service; half a dozen others were in attendance. A choir of 20 or so were assembled. None had met before. They carried the mostly sung liturgy without missing a note. It was an unostentatious act, neither protest nor cleaving to the church: “I’m not privy to the inner workings of the church, nor an expert on health and safety”, Rose said. “But I support both the protesters and the church.” Other attendees were more forthright. Marika, a retired lawyer from Colchester, said that the “church was missing a historic opportunity to say something about the world today.”

You might barely have noticed this ceremony if you were passing it on the way home, but it would be impossible to overstate its importance. By the time the announcement of it had hit the wires at midday, the church — which is not merely an arm of the British state, but a pillar of British society — realised it had a problem. By the time, the impromptu Evensong met, the few dozen attendees had, in effect, become the church — constituted without walls, outside of stone temples rather than within, a memory of its being before Rome, when it was, as in Paul’s day, a sect of fanatical equality, meeting in caves. That is all it takes. And the church knew it. Before the service had been concluded, St Paul’s had already announced it would reopen.

More, or equally, importantly, the service was the first major act of solidarity within the space marked out by Occupy London — and one, by its very difference of manner, that marked the greater thing it might become. For there was something very refreshing about the plainness of the Anglicans, the simplicity of their manner and dress. I’m as much a fan of the political carnival as anyone, and part of the liberation that something such as Occupy London projects is the example that you don’t have to assemble your identity from a series of brands — but there is something preferable about the sheer absence of conscious style, which I associate as much with the old Left as with Christianity.

The Occupy movement will be at the next level, when such people crowd the squares. In Australia, tidying up for the Queen and G20, in a country where sympathy for the movement is limited, they are swept away, with violence that is the opposite of unostentatious. In other places where sympathy is substantial, such as Oakland, they can be treated in the manner of that other city’s other product, the Black Panthers, and suppressed viciously. But in London and hundreds of other cities, the authorities do not dare. They know that eventually more people will find themselves called to the square, out of the conscience and the need to bear witness, born through the swelling currents of the city, landed safe on Canaan’s side.

Occupy’s big no was a big yes to something else

The beautiful, bare occupation of Wall Street and Westminster Bridge 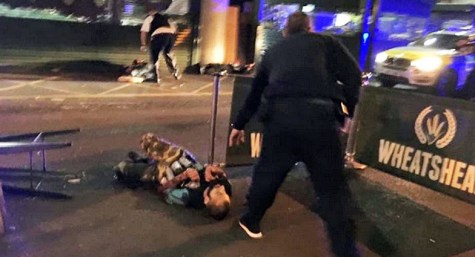 Rundle: seven people killed, and it took just 18 hours for the politics to start again

“as in Paul’s day, a sect of fanatical equality, meeting in caves.”

Was it really? In the book of Acts Christians are described as meeting in the temple courtyards. Multiple times in Paul’s letters he greets church that are meeting “in the house of…” I don’t think I’ve ever seen a reference in his writing to a group that meets in a cave…

A very well drawn picture of the Occupy site, Guy.

sauron256 – it may be a little post-Paul, but early Christians did meet in caves, and even lived underground hiding from the heathen hordes (or something) for years. Turkey’s tourism industry depends on showing westerners their examples of such caves.

The ideals of Christianity and the London Stock Exchange are a bad mix.