Come in Spinner: why do we believe so much that’s wrong?

One of the great conundrums of modern life is how so many people have come to believe so much that is just plain wrong.

One of the great conundrums of modern life is how so many people have come to believe so much that is just plain wrong.

In the face of modern ignorance, it’s almost possible to believe the Enlightenment never happened or that the world is divided between those trying desperately to keep its lessons alive, and those who believe — or wish — it had never happened. Clearly, humans are generally less ignorant than they were a few centuries ago, even if religious fundamentalists around the world do yearn to bring back a new version of the Dark Ages past but …

Sitting in a market research presentation on the current Australian psyche (drawn from probably the best longitudinal study, Quantum’s AustraliaSCAN) the other day, it was striking to hear how many Australians are so fearful — about jobs, violence, children being snatched from the streets, drugs legal and illegal and just fearful about being fearful. Concern about jobs and the economy is understandable although the level of outright whingeing is inconsistent with the realities of Australian life compared with that in other countries. Violence outside the home is far less prevalent than it was a few decades (let alone a century) ago and statistically it is safer to walk the streets, where muggings are less common, than stay at home and risk domestic violence. Without checking the statistics it is probably plausible that more children are killed in four-wheel-drive accidents than are snatched off the streets by predators although the appreciation of this risk equation doesn’t stop mothers using them to drive their children to school.

The easiest explanation is to blame the media and PR and marketing people who peddle a fantasy/horror world to create audiences or consumers. There is some evidence that the explanation is partly valid. Fox News viewers, for instance, are the most misinformed of all news consumers. According to a University of Maryland study, Fox viewers’ ignorance actually increases the longer they watch the network. (Tim Dickinson,  Rolling Stone, June 2011 and reprinted in the AFR on October 14). Brian Toohey (AFR, September 10-11) reports that a BBC survey found that one in four Americans aged 16-24 believe the Bush administration was involved in the 9/11 attacks. It’s easy to laugh (although it is probably a reason to be afraid) about US attitudes, particularly given the number of elected officials who believe the “end days” are near.

But Australians are also way off beam on more mundane subjects. The Australia Institute paper, Mining The Truth, demonstrates that the Australian public’s beliefs about the mining industry’s size, employment numbers and levels of foreign ownership are far removed from reality. Industry bodies have disputed the figures but then it would be surprising if they didn’t. It is difficult not to conclude that public misperceptions are partly due to mining and media campaigns about how important the industry is to Australia and why a tax on it would be awful. The constant claim that Australia shouldn’t go it alone on carbon emissions disregarding emissions trading systems in Europe, NZ and now California get repeated endlessly by politicians and reproduced without challenge in the Australian media.

It is easy for a mining industry CEO or chair to get blanket, unquestioning, media coverage of the Australian taxes on mining being the greatest risk they face in the world without anyone asking about the numerous other countries that are increasing royalties or even introducing  partial nationalisations.

Nevertheless the media can’t be wholly responsible — however poisonous and ideological parts of it are and have always been. There must be deeper factors at work. Evolutionary psychologists have some explanations as to why we believe or don’t believe things but some evolutionary psychology has the disadvantage of making Freud look scientific.

Two recent books look at some of these more fundamental factors. Kathryn Schulz’s Being Wrong (Portobello Paperback) is about how people “screw things up”. Her argument is that a propensity to error is deeply rooted in our psyche and she gives lots of examples — from free marketers, to medicos and consumers — where people persist in defending beliefs that have been refuted. The productivity debate in Australia is an emerging example of this where business will keep insisting it is about regulation and industrial relations rather than poor management, lack of leadership and inadequate investment in soft and hard infrastructure. The articles Australian think tanks spew forth whenever their ideological assumptions are threatened are daily examples.

Dr Michael Shermer, editor of Skeptic magazine, has recently released The Believing Brain (Times Books), which suggests that beliefs come first and explanations for beliefs follow. Shermer looks at how we impose narratives on our observations of the world; explains in some detail how the mind works to shape beliefs; looks at how we believe in things unseen; and how confirmation bias skews the way we perceive things we see. In particular he uses two theoretical frameworks that he calls patternicity and agenticity. Basically, he argues, we seem to be driven to find patterns in meaningful and meaningless data; or, when we see patterns assume they have meaning, intention or agency. Shermer’s website www.michaelshermer.com has more details.  Obviously these constructs, while applicable to humans as a whole, have some resonance when one tries to explain or understand journalistic practice.  Shermer is also useful reading for those who want to reclaim the word “sceptic” and the virtues of “scepticism” from the climate denialists.

For humans as a whole, none of this means it is not our fault (as children often claim when they break something) but it does mean that even if our wiring pre-disposes us to some errors,  once we understand why we believe things it’s easy to work out what’s true and false.

It doesn’t help those who only get their news from Fox but as Schulz points out — lots of people from Alan Greenspan to former Klu Klux Klan members can admit that they have been wrong. Sadly, while it is easy for many politicians (with some notable exceptions) to say sorry about something in the past, too few of them are brave enough to say I don’t know or I was wrong.

*Noel Turnbull is an adjunct professor, media and communications, at RMIT University. The author has worked for the mining industry and is a contributor to The Australia Institute. 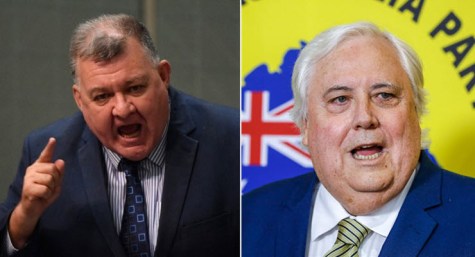 Come in Spinner: a new narrative for Julia Gillard

Same as it ever was: try dipping into Thomas Browne’s Pseudodoxia Epidemica or Enquries into very many received tenets and commonly presumed truths (1646)

Alan Greenspan, free marketeers, Fox, Industry bodies opposed to increased taxation… that one side of politics sure is wrong about a lot of stuff.

Good article, thanks. I still blame the media for a lot of it. But those other factors are worthy of consideration too….

“The articles Australian think tanks spew forth whenever their ideological assumptions are threatened are daily examples………The author has worked for the mining industry and is a contributor to The Australia Institute.”
LOL Pot – kettle.

Many people persist in defending beliefs that have been refuted, because that’s where the money is. PR flunkies get paid more than journalists.

As Upton Sinclair said, “It is difficult to get a man to understand something when his job depends on not understanding it”.