Crikey media wrap: Julia Gillard will open the Commonwealth Heads of Government Meeting in Perth today with a warning to Europe that it needs decisive action to cope with its financial crisis.

Prime Minister Julia Gillard today will open the Commonwealth Heads of Government Meeting in Perth with a warning to Europe that it needs decisive action and leadership to cope with its financial crisis. Her speech, which was released to media outlets, will note how slow Europe’s response has been so far:

“While the epicentre of the crisis is Europe, all of us as Commonwealth member nations stand to suffer if the correct response is not forthcoming.

“European leaders will need to stabilise the situation by resolving sovereign debt issues and ensure there are adequate safeguards to avoid contagion.

”Europe also needs to ensure that its private banks are adequately capitalised to ensure stability and growth.”

Gillard’s speech comes as rumours abound that French President Nicolas Sarkozy declared he was “sick of [British Prime Minister David Cameron] telling us what to do” as they clashed over responses to the debt crisis.

But it’s not just Europe that puts the Australian economy at risk. Poor relations between China and the United States would directly affect Australia’s resources boom, writes ANU professor Hugh White in The Age:

“… a US and China armed clash over an issue such as China’s disputed maritime claims with Vietnam would bring all trade with China — and probably the rest of north-east Asia — to a dead stop.

… We have a vital stake in our government managing Australia’s future in Asia more seriously, to help stop the escalating strategic rivalry already taking hold between the US and China. Perhaps if the big miners say it, our politicians will start to listen.”

CHOGM, a meeting of the 54 nations of the Commonwealth, isn’t just about joining together to threaten Europe. As Phillip Coorey reports in The Sydney Morning Herald:

“CHOGM is taking place against the backdrop of a harsh internal warning that the Commonwealth is sliding towards irrelevance and obscurity. The 54 nations, of which 16, including Australia, count the Queen as their head of state, commissioned a review after the last CHOGM in 2009. It was conducted by a nine-member eminent persons group, which included the former High Court Justice Michael Kirby and the former British foreign secretary Malcolm Rifkind.

The report finds the Commonwealth ‘fails to stand up for the values that it has declared are fundamental to its existence’.”

Cameron is also attempting to get support from CHOGM leaders regarding changes to monarchy law to allow for the first-born heir to inherit the throne regardless of whether they are male or female. Gillard announced she supports reform to the outdated laws, which currently allows a male heir to reign even if he has an older sister.

Meanwhile, Kevin Rudd is also at CHOGM, yesterday accepting from World Vision a large paper plate representing world hunger. But the leadership issues aren’t going away, with Michelle Grattan writing in The Age: “When Kevin Rudd was told to ‘step up to the plate’ yesterday he was very willing. Some might have seen it as a metaphor for his wider ambition.”

After CHOGM, Gillard will head to France for the G20 meeting. 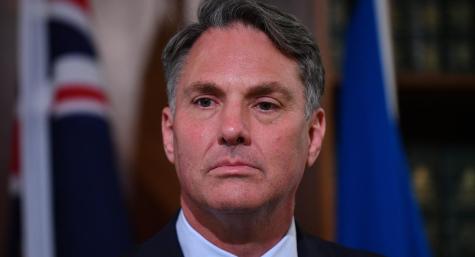 Oh yes … my goodness me… the Commonwealth sliding into irrelevance? Who would have thought?

But Cameron is leading the charge back to the future …. smashing through the glass ceiling for queenliness… yes that’ll show those pesky froggies what’s what eh? eh?

Reminds me of a story that apparently ran on the front page of the Times several decades ago … “Channel shrouded in Fog – Europe cut off!”

Never have so many been so thankful for such a small bit of water.

CHOGM is irrelevant and a waste of taxpayers money from their respective countries.

It’s time to move on Australia and stand on our own feet.
What he said:
http://www.guardian.co.uk/commentisfree/2011/oct/21/australia-queen-visit-equality