The punitive-minded police state cranks up for CHOGM

The honour of hosting this year's Commonwealth Heads of Government Meeting fits in perfectly with the Perth's idea of itself as a cultural and economic powerhouse.

What strikes the visitor to Perth most forcefully, and most immediately, is its air of self-confidence. While politicians and commentators in the east like to play down the potential longevity of the west’s current mining boom — the better, one suspects, to keep the romantic secessionist rumblings in check — those who actually live here have a uranium-glow of optimism about them.

When I was here in January, I was told by a woman who works on an offshore oil rig that what the state was actually experiencing was “not a boom”, but rather “a boom within a boom”. On the first day of my most recent visit, I was told that the latter of these booms, the what-the-hell-is-water boom, would last “a hundred years”. This prospective timeframe accords nicely with the comments of Perth’s recently re-elected lord mayor, Lisa Scaffidi, who last week told reporters that the city is on the brink of its “Belle Époque”.

It almost goes without saying that the honour of hosting this year’s Commonwealth Heads of Government Meeting fits in perfectly with the city’s idea of itself as a cultural and economic powerhouse. That Perth should have been chosen as the site for this get-together is seen to be indicative of its growing importance, not only within the context of this country’s national accounts, but on a larger, global scale, too. Far from being hassled with all the trans-continental flights, the thinking goes, world leaders should feel honoured to be coming to one of the most remote cities in the world. Perth, the thinking continues, is worth it.

And yet things haven’t been quite so belle in the époque leading up to the meeting. Anti-CHOGM protesters, making common cause with the increasing transnational Occupy movement, are very loudly planning to march on the event’s opening. Organisers’ houses have been raided on dubious grounds and said organisers interrogated about their plans. (After Occupy Melbourne and the manner in which it was put down, Perth’s organisers have started to back away from their original plans and are now claiming they have no intention to enter or occupy restricted areas. Somewhat less sensibly, they have also started claiming that CHOGM is a meeting of the 1%, rather overlooking the GDP per capita of several of the countries that are actually attending it.)

Perth’s prisons — and this is my favourite of the recent security-related news stories — have been ordered to make sure they have enough room to handle mass arrests, the sort of order that makes such arrests sound, not only possible, but inevitable. Indeed, the feeling one gets, in the ore-speckled air, is less that of a European city in its golden age than a punitive-minded police state cranking into gear. One can only assume, in other words, that the city’s 100 years of enlightenment are on hold until next week, when Queen Elizabeth II is safely aboard her chartered jet and somewhere out over the Indian Ocean.

Walking around Perth’s CBD on Saturday, the signs of the security ramp-up were subtle but many. They were also quite literally signs. Hundreds of them, sandbagged to the ground or zip-tied to light poles, have appeared without fail at 10-metre intervals all up and down St George’s Terrace and Riverside Drive, warning the reader that he is entering a CHOGM security zone and may thus, among other humiliations, be searched without warning. Like signs in airports that prohibit photography, which one always feels a strange compulsion to photograph, these signs stir one’s nascent urge towards civil disobedience.

You find yourself wanting to steal one of these signs, put it in your bag, and then get the attention of the nearest police officer so that he might search you without warning and find it.

The nearest police officer shouldn’t be too far away. On Hay Street Mall, a seven-strong posse, blue limbs sprouting from their fluorescent yellow torsos, made their way along a predetermined route, scoping things out. Meeting another three of their ilk coming at them in the other direction, the seven stopped to form a quorum of 10 in the middle of the mall, before each group went its separate way.

Of course, those aforementioned 10 police officers — the seven on their route-mapping mission and the other three keeping the 16-year-olds in the mall under observation — had divided and multiplied by yesterday, when the full-scale APECisation of Perth really got under way. With Julia Gillard flying into town ahead of today’s cabinet meeting, hundreds of uniformed and plain-clothes police, in marked and unmarked cars, took to the streets. Some of them will have only recently completed their training. Others won’t even be from this side of the country. And that’s just the heat that the ground will be packing.

A $600 million Boeing 737 AEW&C, or Wedgetail, will be airborne every day of the meeting, the better to fire laser beams at anyone who’s feeling lucky (or so the very excitable West Australian would have you believe). Eight RAAF F/A-18 Hornets and several Black Hawk helicopters — the latter of which have been heard throbbing over the city like mechanised blowflies all week — will be stationed at Base Pearce, 35 kilometres north of the city, in case anyone should run at anyone with a starter’s pistol. (Talk about keeping calm and carrying on, by the way. Prince Charles was straightening his cuffs throughout the entire incident. As much as you hate him, you’ve got to love him.) The Wedgetail and the Hornets will be flying trial runs over the city today and tomorrow.

If the behaviour of the police on the weekend was anything to go by, they’ll be spending more time flying over the mall than they will over the security zone itself. On Saturday, at least, the latter had hardly anyone in it. Down there, besides the naff floral arrangement that spells “CHOGM 2011” atop a grassy knoll, and the large Hollywood-sign letters that spell “PERTH” and that, from a certain angle on Fraser Avenue in Kings Park, appear like a name tag on the breast pocket of the city, the country town deadness of a lazy weekend afternoon was complemented by a more insidious sense that one probably shouldn’t have been down there at all. One thing the police have been relying on this week is that media coverage of their plans might to help generate a sort of self-policing city.

As for Fraser Avenue itself, the only street besides those directly adjacent to Government House that is going to be closed to all traffic for the duration of the meeting, it remained untouched on Saturday afternoon, with neither the yellow-vested keepers of the peace or the blue-and-white-checked threats against one’s orifices. But then, there was a mining industry function at the restaurant atop the hill that night, and one doubts that the city would have wanted to put any of its captains of industry out.

CHOGM: Barnett’s evocation of security on the money, but target is not 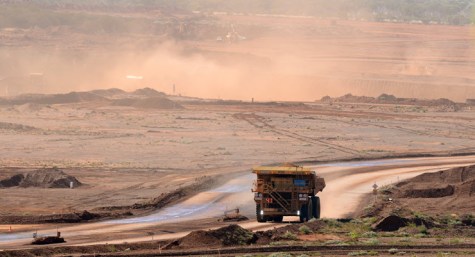 First bit of excitment there since America’s Cup in 1987. The deserve some attention.

“A $600 million Boeing 737 AEW&C, or Wedgetail, will be airborne every day of the meeting, the better to fire laser beams at anyone who’s feeling lucky.”

Who writes this twaddle? Lasers? FFS!

The Wedgetail is an airborne radar plane, helping control the airspace over the city. It means that if someone is off course, they can be detected early and assisted to their destination without causing a potential incident.

It’s presence also means that if an attempt is made to conduct an airborne assault on the meeting (and lets be honest here, a number of CHOGM leaders do face significant terrorist threats) the Wedgetail can direct the Hornets to the situation while making sure that other aircraft are advised to safely avoid the area.

A little less ignorant ‘boys own’ and a little more facts about what is being discussed would help make Crikey look a little less amateurish.

Yes Michael, it is.

If any plane is off course in Victor 1, the zone around Sydney Harbour, it could be over the city, before any jet could be scrambled off the runway from Richmond RAAF or eeven Sydney Airport.

“an airborne assault on the meeting”

I didn’t realise CHOGM was taking place in a Tom Clancy novel.

This just goes to show how much we LOVE our leaders, when they need so much protection, they are too protected to know how despised they are.
A good scare would maybe do the some good, but their corporate masters would fix it.