Doyle breaks up the Occupy Melbourne party in the city square

Victoria Police have acted on Lord Mayor Robert Doyle's demands to evict members of Occupy Melbourne from their indefinite camp in City Square, calling in the force's shield-wielding riot squad to disperse the tent city.

Victoria Police have acted on Lord Mayor Robert Doyle’s demands to evict members of Occupy Melbourne from their indefinite camp in the City Square, calling in the force’s shield-wielding riot squad to disperse the tent city.

As Crikey‘s deadline approached a core group of about 100 supporters were continuing to resist the overwhelming police presence with the officers employing controversial “kettling” tactics to box the stalwarts in.

A tight ring of around 200 police were corralling those remaining with other loyalists occupying the corner of Swanston and Collins Streets. Police then descended, physically pulling protesters out of the intersection. 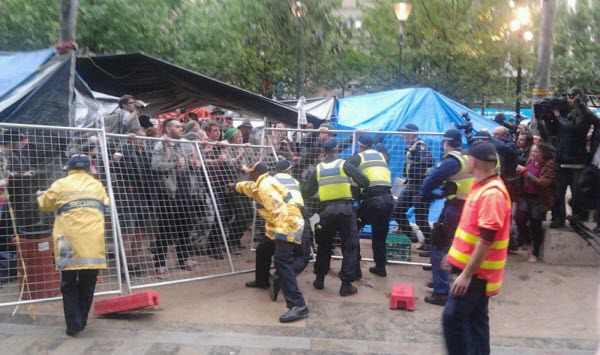 Much of the camp’s infrastructure — present on the site since last Saturday — had been removed and binned with around 100 protesters linking arms in a show of defiance. The kitchen and media tents were gone this morning with the remaining scaffolding piled into a council truck.

Yesterday, council offers presented occupiers with an eviction notice under the Council’s Activities Local Law 2009 which apparently prohibits camping and “hanging or placing objects” over the square. They were required to move by 9am today.

3AW host Neil Mitchell was quick to get his great mate Doyle on the air this morning to condemn the convergence. Then, on the program’s regular ‘Left & Right’ segment, former unionist Bill Shorten said the occupiers had “had a fair go” and it was “time to move on”.

Police arrested at least two protesters this morning who were led away in handcuffs, despite earlier statements the dispute would be resolved peacefully.

Throughout the stand-off, members of the CFMEU joined in the chanting outside the square, which included the group’s trademark cry of “we are the 99%”, “we shall not be moved” and perennial favourite “the people united will never be defeated.”

Police had erected temporary fences around the perimeter of the protest site in a variation of the kettling tactics seen in the UK. Unfortunately for the Melbourne incarnation, the City Square seemed almost purpose built to hem the masses in, with attendant media perched on elevated vantage points on the square’s perimetre, which increasingly resembled a football field.

Victoria Police tactics are sure to be heavily scrutinised. At one ugly juncture a police horse trampled a protester when riot squad and mounted police charged on the Collins and Swanston intersection.

Melbourne City Council is divided on Doyle’s decision to boot the dissenters, who are mobilising against corporate greed and inequality. Greens councillor Cathy Oke slammed the Lord Mayor’s decision to send in the cops, telling Crikey she was totally unaware of any looming action.

“I certainly didn’t endorse this action or decision to bring in riot police and fences to remove peaceful protesters,” she told Crikey. “The only discussion that I’ve ever about this was earlier on the week. It is incredibly unfortunate because I thought that Council was dealing with it with appropriate manner and then you see riot police in there. It’s sad, it’s really sad that Melbourne and the City Square looks as it does in the international media and on Twitter.”

At an impromptu doorstop this morning, Inspector Mick Beattie denied that police were preparing to arrest activists, citing a good spirit of cooperation across the six days of occupation.

“These people are going to have to leave. Our primary objective at this time is to avoid confrontation. We’re prepared to be very patient. We have enough resources to reclaim the land for the City of Melbourne,” Beattie said.

“We don’t really want to arrest people…We just want to patiently work through it and hopefully the wind will come out of their sails in due course.”

But other police disagreed. “It can only end in tears,” said an anointed police liaison officer, wearing a Jeep-branded hoodie.

(Undercover police were swarming over the square covertly filming the protesters in unconvincing “casual” attire — the main giveaway being loose-fit jeans that chafed with the skinny black strides favoured by actual activists). 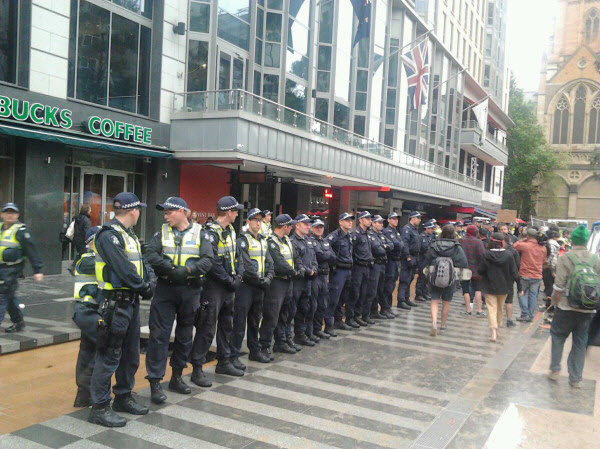 One protester, Nicola Paris, said she had been arrested for taking pictures of police who — in an echo of the Melbourne S11 convergence — had apparently removed their name tags, a claim denied by Beattie.

Another protester David Schoeffe, said he was planning to stay put regardless. “Practically speaking it’s going to be awhile before I get hungry so I’ll be here until I get arrested,” he said.

“Amongst others, I don’t believe that just Robert Doyle could have orchestrated this.“

While relations between the council and police and the protesters had so far generally been cordial and constructive, the rare alliance between Doyle and his bitter Liberal factional enemy appears to have born fruit.

Another semi-official spokesperson for the group, one-time Greens candidate Nick Carson, summed it up best as the riot squad bore down: “four million people around the world are doing this and it’s not going away.”

Above photographs taken by Sexenheimer.

Inside the spin: how accused harassers get ahead of the story

so what were the ‘occupiers’ if not part of the city.? I know there’s a leagl entity called CoM but being able to arrest people for being on public land seems to call into question the term ‘public’.

Any lawyers out there who can clarify?

This article is inflamatory clap trap.

The attitude of the protestors is summed up with this quote “Practically speaking it’s going to be awhile before I get hungry so I’ll be here until I get arrested,”. They want the police to arrest them, they want to be seen to be victimised. In reality they were given 6 days of occupation to raise awareness of their issue (one that relates more to the US than it does here but an issue all the same) and they were then given plenty of time to move on. It seems to be very fair treatment to me.

SBH – ” being able to arrest being on public land seems to call into question the term ‘public’” First has there actually been any arrests and second public land belongs to everyone, not just a hundred odd people making a political point.

Further to my point this is much more of an issue in the US:

According to the CIA World Fact Book, the U.S. is ranked as the 42nd most unequal country in the world, with a Gini Coefficient of 45.

This link also has a map which shows the issue pretty clearly
theatlantic.com/international/archive/2011/09/map-us-ranks-near-bottom-on-income-inequality/245315/

Crack some skulls Vic Police and make sure they never come back. While hard working Australians are busy at work paying taxes, these dole bludging louts are sucking the public tit then causing as much trouble as possible for people to go about their every day lives.

Scum, the lot of them.