Does anyone care about the Walkleys? "What is wrong with bloody journalists," asks columnist and radio jock Mike Carlton. Plus other media news of the day.

Does anyone care about the Walkleys? “What is wrong with bloody journalists,” asks columnist and radio jock Mike Carlton. After our report yesterday of the poorly attended announcement of Walkley Award nominations in Melbourne, the host of the Sydney event weighs in:

“Why was the public announcement of this year’s Walkley finalists so thinly attended in Sydney and Melbourne and, I guess, Brisbane? For heaven’s sake. These are the premier awards for the nation’s best journalism. A lot of sweat goes into picking the winners. But nobody seems to give a stuff.

“The Sydney show was held on Monday evening in the courtyard of the Media, Entertainment & Arts Alliance in Redfern. I hosted it with Liz Jackson from Four Corners. It was a polished production, with minimum speeches, live jazz and a tremendous big-screen montage of this year’s top news pictures. There was good food and an unlimited supply of high-quality alcohol courtesy of our latest Walkley sponsor, Pernod Ricard. All free, gratis and for nothing.  Yet maybe 40 people turned up.

“Sure, you’ll get the finalists’ names emailed to you if you’re an MEAA member. And, yes, it was a Monday night. But this should have been a terrific opportunity to get down and dirty with your mates and, better still, your rivals and foes in journalism. Maybe next year we should just promote it as “free food and booze — PS: Walkley finalists also announced.”

The live blog of being suppressed. The Herald Sun went large yesterday with a promise to live blog “Fat” Tony Mokbel’s drugs trial in the Victorian Supreme Court. Unfortunately for court reporter Elissa Hunt, it didn’t really come off as planned, with the wily Peter Faris, QC, for Mokbel, demanding a suppression order on Hunt’s keyboard despite prior permission having been granted by former Coodabeen Champion, the presiding Justice Simon Whelan.

Faris wanted to ban reporting of Mokbel’s change of plea because some police apparently hadn’t properly sworn affidavits used for phone taps. But revenge was swift for the Hun who worked up a classic “Pay My Bills” front page this morning because Fat Tony’s defence is funded by Legal Aid. The paper even got HWT’s in-house lawyer, Justin Quill, to front a video explaining the brouhaha. Here’s how the drama unfolded before Hunt’s plug was pulled — the promised “five minutes” delay turned into an hour-and-a-half as Faris laid on the legalese:

Elissa Hunt: Mr Faris is now complaining about us reporting live despite us having permission from Justice Whelan.

Elissa Hunt: Justice Whelan is now explaining that the live reports are now part of the way courts are covered and are not two-way conversations, but merely reports

Elissa Hunt: Mr Faris has moved on to asking for a suppression order on the live blogging

Elissa Hunt: Mr Kidd is supporting a temporary stop on live blog so they can apply for a suppression order

Elissa Hunt: Just for five mins we will be off air

Das ist an error-ridden account. Former Australian banker Satyajit Das is getting plenty of publicity for his new book, Extreme Money, including this claim given in an interview on Bloomberg:

If Satyajit Das is right, China will end up writing off its $3.2 trillion in foreign reserves. Europe is shambling toward Japanese-style growth. And a day of reckoning is at hand for creditors and debtors alike.

“Europeans are going to have to recapitalise their banks,” Das said as we discussed the sovereign-debt crisis and his new book, Extreme Money, over coffee in a Brussels hotel. “You have made bad loans; you’re going to have to write them off. That is the one axiomatic law of making a bad loan.”

Das, 54, is the puckish derivatives specialist who lampooned banking excesses in Traders, Guns & Money. He was in town to brief members of the European Parliament on the crisis. Looking relaxed in a black V-necked sweater and black shirt, he talked about Germany’s fling with Greece, China’s unpaid loans and what Angela Merkel can learn from Winston Churchill. We began with Dexia SA’s second bailout.

But a mostly favourable review of his book in the current edition of The Economist (behind a paywall, it seems) points out some gruesome errors in Extreme Money, such as:

“Less forgiveable is the fact-checking of this book. The Michael Douglas character on Wall Street is Gordon Gecko (even Oliver Stone isn’t quite that literal) and the head of Berkshire Hathaway is ‘Warrant Buffet’. It even misnames the founder of this newspaper as Walter Bagehot (it was James Wilson) and misspells the name of the current editor. If only the author and his publisher had some inter-based tool with which they could research such facts: someone should invent one and call it, say, a ‘search engine’.”

Small points for someone who continues to make sense on finance. But the Warrant Buffet error is verging on the criminal in an author of a book dealing with modern finance. Unintentionally, Das may have made a small, but telling pun on Warren Buffett’s propensity for buying warrants in many of the companies he bails out, such as Goldman Sachs, General Electric and lately Bank of America. Those warrants are usually well priced and end up heavily “in the money” — that is, profitable for the shareholders in Berkshire Hathaway, of which Mr Buffett is by far the largest. — Glenn Dyer

Is Apple eating itself. iPads are “cannibalising” the market for Macs and Windows-based PCs, according to Apple CEO Tim Cook. “I do believe we are seeing cannibalisation. Some people are buying an iPad rather than a Mac. But more people are buying an iPad rather than an Windows PC. With cannibalisation like this, I hope it continues,” he said. CNN reported Apple’s fiscal quarter as disappointing, despite a profit increase of 53.6% and record quarterly sales in Macs and iPads. According to Reuters, Apple Inc. will be closing all of its US stores today, in a company-wide celebration of founder Steve Jobs’ life.

Anthony Albanese and the Hamster. What was his media adviser thinking, indeed … Negus gets the boot

“Ten is to axe its brave news experiment of 6.30PM With George Negus and replace it by stretching The 7PM Project to one hour and starting it half an hour earlier. It will now be known as The Project with the new lineup starting a week on Monday.” — mUmBRELLA

No news is good news in Greece?

“Greece was left without news coverage yesterday as journalists went on strike ahead of a two-day walkout by unions seeking to block an austerity bill that the government must pass to avert bankruptcy.” — AAP

“Seven West Media has finalised a new $1.95 billion credit facility so it can steadily reduce debt.” — The Age

“Although a number of Australian-listed media companies have posted big gains this month, analysts are cautious about the sector’s outlook, given likely challenges ahead. Key media companies Fairfax Media, Seven West Media and News Corporation (parent company of The Australian) have bounced off recent lows.” — The Australian 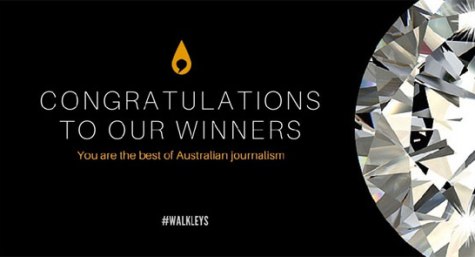 What really goes on inside the Walkleys judging process

About time they axed Negus. A pompous & irrelevant narcissist, living off a mediocre past on 60 Minutes.
Won’t be missed by the 2 crickets & 3 dogs that watched his boring program.

If you’re going to point out ‘gruesome errors’, better make sure you get the corrections right. I’m pretty sure the Wall Street character’s name was Gordon Gekko.

Good to see Assange jumping in to grab credit for OWS before GetUp! can…

The Walkleys reflect the piss poor “journalism” that is being dished up. No one wants to read or hear endless negativity or be around the depression peddlars.

What a load of nonsense. Das’s book is excellent, and when I read “Warrant Buffet” I also took it a subtle pun. As for getting Walter Bagehot and James Wilson wrong, well Wilson was Bagehot’s father-in-law, so it’s all in the family anyway. The Gecko/Gekko misspelling is a non-event.

Given the amount of detail in the book, these small errors/typos are a non issue.