Will business gouge under a carbon tax? How will business prepare for the introduction of a carbon tax? We got the inside word from a fund manager after they attended a private presentation for institutional shareholders of a well-known manufacturing firm: “When asked about the impact of the carbon tax, the CEO said that it […]

Will business gouge under a carbon tax? How will business prepare for the introduction of a carbon tax? We got the inside word from a fund manager after they attended a private presentation for institutional shareholders of a well-known manufacturing firm:

“When asked about the impact of the carbon tax, the CEO said that it would initially cost them about $6 million a year, but they expect to recover most or all of this cost. Part of this will come from finding ways to reduce emissions — he said they have been pleasantly surprised at the number of ways they’ve already found to cut emissions at modest cost. They also plan to recover part or all of the carbon tax by raising prices to their customers. A nice feature of the carbon tax is that customers won’t know how much the carbon tax actually costs the manufacturer (unlike the introduction of the GST), so depending on market conditions, they may be able to increase their prices by more than the carbon tax impact.”

Combet briefing in the back pocket. There’s the official briefing for ministers ahead of a Senate estimates grilling, and the unofficial briefing according to one insider: “Department of Climate Change and Energy Efficiency staff have provided Minister Greg Combet with “back-pocket” briefs in the lead up to Senate estimates. The back-pocket briefs are “unofficial” and “politically sensitive” information that is not contained in the additional estimate briefing papers. Certainly not the information the government would want falling into the opposition hands.” Indeed.

Public servants speculate on Qld election. We report, you decide. One tipster insists: “Strong rumours circulating within the Queensland Public Service that Anna Bligh will visit the Queensland governor on Monday, October 17 to call the next state election. A long campaign is expected to try and wear down LNP.” Not so far …

Clarence byelection a two-horse race? The good people of Clarence on the north coast of NSW will vote in a byelection on November 19 after National Steve Cansdell stood down. The Nats’ Chris Gulaptis will inherent a big margin taking on Country Labor’s Peter Ellem, but Crikey hears there could be a surprise independent candidate yet emerge. “Business houses in both Grafton and Casino have received a document which would indicate so,” says our spy.

Confrontation fails to win over South Perth. Western Australia was at the polls yesterday voting for new mayors, and the recriminations have already started. In the City of South Perth — where former deputy mayor Sue Doherty got up — the defeated councillor Travis Burrows has has come under attack for his tactics. One campaign insider writes:

“In the aftermath, members of the Burrows campaign team have been scathing of his electioneering tactics — describing Burrows’ campaign methods as abrasive and condescending towards rate payers. Despite spending five times more than his nearest opponent on advertising during the campaign, many close to Burrows warned him that he would be better served by spending less money on his ‘in your face’ placards and spending more time engaging more on local issues.”

Herald Sun circulation rumour. News Limited’s Melbourne tabloid the Herald Sun will record a circulation figure at the next audit of 475,000, down 30,000 on last year, according to one mole.

Journalism to PR in one day. Can’t get a job in journalism as media organisations sack more people than they hire? Sick of earning next to nothing for long hours and no appreciation? Why not become a PR person! Journalists can apparently make the transition after a mere one-day, $595 (plus GST) course … 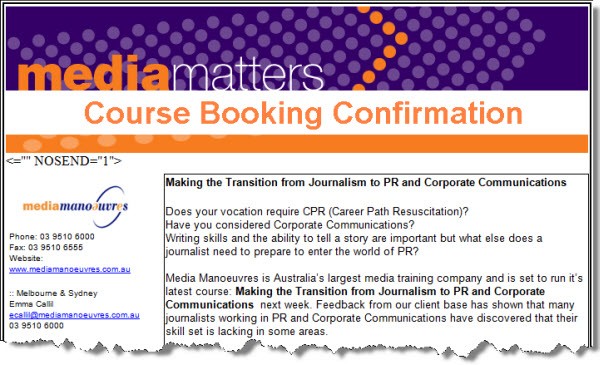 Supermarkets double dipping? From the 3AW Rumour File: “Caller ‘Double Dip’ speculates that some supermarkets are scanning more than once by staff.” Be on the lookout!

“Supermarkets double dipping? From the 3AW Rumour File: ”Caller ‘Double Dip’ speculates that some supermarkets are scanning more than once by staff.” Be on the lookout!”

Sounds like BS to me. It would destroy their inventory control for starters.