Can lawyers save the planet?

Crikey intern Greg Foyster: Lawyers have been called many things over the years, but “greenie” generally isn’t one of them. Yet with politicians hamstrung to address environmental problems, the legal profession is fast becoming our planet’s last line of defence. Once considered “comical”, the concept of legal rights for nature is finally being taken seriously, […]

Crikey intern Greg Foyster: Lawyers have been called many things over the years, but “greenie” generally isn’t one of them. Yet with politicians hamstrung to address environmental problems, the legal profession is fast becoming our planet’s last line of defence.

Once considered “comical”, the concept of legal rights for nature is finally being taken seriously, with the Chief Justice of the NSW Land and Environment Court attending a conference on the topic in Brisbane last month.

Many Rooted readers will know this is not a new concept. Pioneering conservationist Aldo Leopold broached the subject in his influential 1949 book A Sand County Almanac, arguing that extending our idea of community to include animals, plants and the land itself could break humankind’s tyranny over the environment.

Christopher Stone expanded on that premise in his 1972 article “Should trees have standing?”, arguing that natural objects, such as trees, forests and streams, should be appointed guardians to represent them in court.

This “unthinkable” proposition drew support from some US judges, but as time passed it became a curious footnote to the legal system — an interesting theory with few real-world examples.

In 2002 South African lawyer Cormac Cullinan published Wild Law: A Manifesto for Earth Justice, adding a practical component to the growing legal philosophy of “Earth Jurisprudence”. A movement was born.

Legislative recognition began in 2006, when US communities passed local laws to protect their natural environment. An ordinance for Blaine Township, in Washington County, Pennsylvania, declares that “ecosystems possess inalienable and fundamental rights to exist and flourish”.

At the national level, earth rights have been recognised in the constitution of Ecuador, adopted in 2008. Mother Nature recently won her first case when an injunction was granted to stop a road being widened along a river. There’s also a push for the UN to adopt a Universal Declaration of the Rights of Mother Earth.

Australia held its first “Wild Law” conference in October 2009, and the third was held at Griffith University in September this year. Conference convenor Michelle Maloney said it was a “raging success”, with 110 delegates and the launch of the Australian Wild Law Alliance.

Chief Justice Preston of the NSW Land and Environment Court gave a speech at the conference, concluding with a phrase that wouldn’t have been out of place on an activist’s placard: “The goal is for law to serve both people and planet.”

So what’s driving this new legal movement to protect the environment? Is it part of a growing disillusion with the contemporary political process, where sensationalist rhetoric trumps rational debate?

“In parliament or in a public platform you can say anything you like …The reason science is taken more seriously in a legal system is what you say is subject to cross examination and you’re required to produce your evidence,” Lowe told Crikey.

It’s a view echoed by other environmentalists. Executive chairman of carbon offset company Cool nrg, Nic Frances, said the percentage of Australians wanting action on climate change had fallen in the last couple of years, and the political debate about the issue had deteriorated. “So the only place that we may be able to resort to is the courts. Because science within the courts still has meaning.”

Frances has even sought legal advice on whether it is possible to sue industry groups and vested interests for “telling lies” about the carbon tax. “Can you sue these people for crimes against humanity?” asks Frances.

That may sound extreme, but it’s in line with a recent push from international environment lawyer Polly Higgins to create a new crime against peace, called “Eco-cide”.

As the political process fails to curb carbon emissions or halt encroaching development, we may see more bold legal moves to protect the environment. One thing’s for sure: all those jokes about lawyers being in it for the money will need to be revised.

Freelance journalist Greg Foyster has written about the environment for G Magazine, The Age and Crikey. 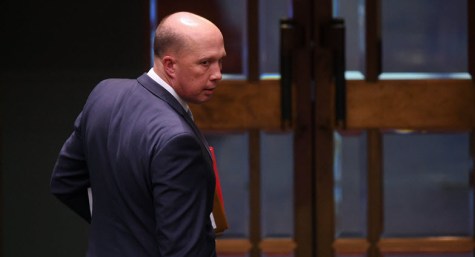 How Dutton is slowly undermining the rule of law in Australia

No rights for trees: how Abbott will gut environmental protection