AFP: details of dealing with The Oz a ‘national security issue’

The Australian Federal Police has claimed that release of details of its dealings with The Australian might endanger national security and undermine "mutual trust and co-operation" between the force and media organisations.

The Australian Federal Police has claimed that release of details of its dealings with The Australian might endanger national security and undermine “mutual trust and co-operation” between the force and media organisations.

In a statement lodged with the Melbourne Magistrates’ Court, Commissioner Tony Negus says he will give evidence in the prosecution case against former Detective Senior Constable Simon Artz, the man accused of being the source for The Australian’s reporter Cameron Stewart’s 2009 scoop in which he broke news of an anti-terrorism operation the day that raids and arrests were made. 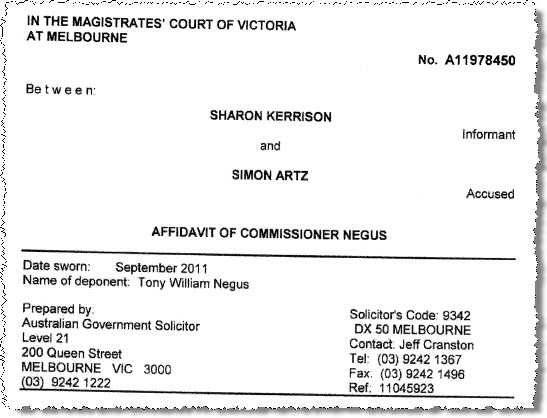 Crikey reported on the AFP’s co-operation with The Australian in repressing details of the crucial conversation last Friday. The conversations resulted in Stewart receiving highly sensitive confidential briefings in return for The Australian agreeing to delay publication of the scoop.

The conversations were between Negus and the-then editor of The Australian, Paul Whittaker. They have been the focus of repeated suppression attempts by The Australian, as well as a corruption investigation by the Australian Commission for Law Enforcement Integrity. That investigation found that the AFP had not acted corruptly, because it genuinely believed that briefing Stewart was necessary to avoid its operations being compromised by premature publication of the details.

Negus says in his statement that confidential and candid communications between the AFP and media organisations help it to secure the co-operation of the media in preventing premature publication of information that would prejudice its operations, with this case being an example.

Negus also says he understands News Limited disputes the accuracy of parts of his account of the conversations.

On Friday afternoon, Magistrate Mr Peter Mealy told a lawyer acting for Crikey and The Age that reading the details of the conversation would leave him “breathless”.

Crikey and The Age have notified the court that they will seek access to the details of the conversation. The issue is likely to be resolved when the committal hearing for Artz begins in the first week of November.

Something smells seriously fishy here…
I could not possibly believe that such a up-standing organisation as New Ltd. and The Australian would ever be remotely involved with any impropriety.

It surely would not involve any hacking of phones or dodgy payments for information, right? Mmm..