Fels in line for mental health role. Is former competition watchdog Allan Fels about to be appointed the federal government’s mental health commissioner? That’s the rumour we’re hearing and Fels wasn’t denying it on the phone this morning: “I suspect I’m being considered but you’ll have to speak to the mental health minister.” We did, but […]

Fels in line for mental health role. Is former competition watchdog Allan Fels about to be appointed the federal government’s mental health commissioner? That’s the rumour we’re hearing and Fels wasn’t denying it on the phone this morning: “I suspect I’m being considered but you’ll have to speak to the mental health minister.” We did, but we’re still waiting for a response.

Fels, of course, is busy chairing an inquiry into Victoria’s taxi industry. He’s not due to report back to the government until mid next year, combining that with his role as dean of the Australia and New Zealand School of Government at Monash University. Could he take on the mental health role as well? The role was left vacant after Monsignor David Cappo stepped down a week into the job amid claims he failed to resolve s-x abuse allegations made against an Adelaide priest. It’s a powerful position, given the amount of money and resources allocated to mental health in the last federal budget.

Aussies invade Buck Palace … and the local. The Queen welcomed some “distinguished Australian” to Buckingham House overnight, and tales are seeping out. Our London correspondent Guy Rundle reports from the Bag O’Nails pub near Victoria Station, the first boozer on the road from the palace:

There, some of the 350 invitees gathered afterwards to process, and get a drink that wasn’t Tasmanian champagne, the only tipple provided. Guests included Elle Macpherson, Greta Scacchi, Hugh Jackman, Jason Donovan, Collette Dinnigan, Nick Cave, sportspeople Tim Cahill and Mark Schwarzer, poet Jayi Savage, playwrights Ben Ellis and Anthony Weigh, among others. The royal decor got mixed reviews: “It looks like a hotel from the ’80s … as a palace it’s really … British.” Correct observation of protocol was variable.

One attendee complained that no one in the line-up knew the drill: that one wasn’t meant to speak until the Queen did. “Someone near me even said ‘hello, Queen’ for godssake. By the time she got to me she was used to people speaking first. So we just stood there in silence for a couple of seconds.” The ultimate verdict? “What with the tiny pavlovas and midget lamingtons, and Kathy Lette in a dress decorated with crown-wearing corgis, I dunno … it was kinda like a trip inside the mind of Dame Edna.”

Sighting (and a mystery TV project). What was occasional ABC TV star Lawrence Leung up to in Canberra this week? Leung was spotted having a lovely old time with Rhys Muldoon at Dickson’s schmick Sub-Urban pub, lingering until stumps on Monday night. A “secret” ABC project is said to be in the works. Meanwhile, Muldoon, a trusted Kevin Rudd insider who loves retweeting his own praise, was spotted later in the week watching Parliament from the press gallery. All very curious.

No place for ideology in innovation. There was some eyebrow raising yesterday when Kim Carr announced appointments to the statutory body Innovation Australia: Nicholas Gruen, Richard Shaddick and Innes Willox. It was the last appointment that amused some: a conservative foe appointed by left-wing warrior Carr. Willox has worked for the Australian Industry Group and as Australia’s consul-general in Los Angeles (organising those celebrity schmooze-fests G’Day USA) but was perhaps most famously the chief-of-staff to Alexander Downer during the AWB rorts affair. (Incidentally, he was also a political and diplomatic scribbler and chief-of-staff at The Age in a former life.)

Virgin tilts into the wind. “Why did the Virgin plane taking off from Canberra Airport around 12.35pm yesterday tip sharply to starboard as it cleared the tarmac? Quite a sight from the Virgin lounge!” Good question. Anyone on board?

Size matters in state comparison. The Urban Development Institute of Australia has picked a fight for the good people of Tasmania — they take pride in their diminutive stature … 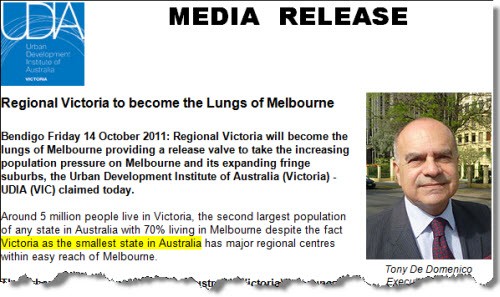 Rhino expecting something big. From the 3AW Rumour File: “Veronica says one of the rhinoceros at Werribee Zoo is due to have a baby any day.” Veronica won a $100 Pancake Parlour voucher for her tip. Rightly so.

Alan Fels did such a poor job at the ACCC, he does not deserve any other role.

It was a shocking performance, where he was weak with Coles and Woolworths

re li’l Victoria, only wrong by a factor of 3+, 227/68sqkms. Perhaps it meant smallest state in real Oz?