Reopening Gladstone Harbour to fishing has clearly put public health at risk, so much so the the local fish market has banned the sale of them, writes Crikey naturalist Lionel Elmore.

Less than a week after the Queensland Fisheries Minister re-opened Gladstone Harbour to recreational and commercial fishing, and dredging for a new liquid natural gas plant resumed,  100% of the fish landed from that zone were withdrawn from sale … 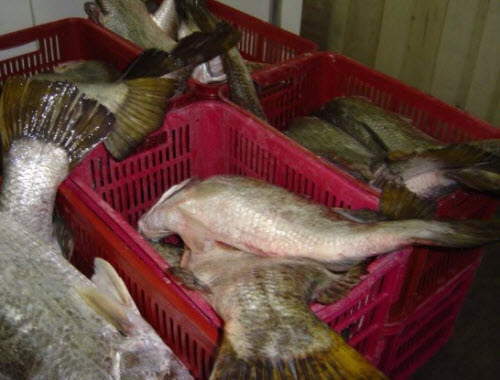 Simon Whittingham, an owner of the Gladstone Fish Market, is appalled at the Minister of Fisheries and the Gladstone Ports Corporation advice to the community, that they would eat the fish caught within the Gladstone Harbour port limits.

The minister has already been caught misleading the public about the results of of surveys on the health of the fish in the 500-square kilometre area he closed.

Worse, the minister has ignored this publicly given advice and reopened the closed area anyway — to recreational and commercial fishermen.  That action has clearly put public health at risk. Whittingham goes on to say:

“I believe it to be very irresponsible of them to suggest and imply that fish, sick with disease, are fit for human consumption. (Remembering who knows at what stage of infection the disease visually presents itself). I believe the fish from the Gladstone Harbour is not fit for human consumption. The government agencies have simply passed the onus of responsibility on the private sector to determine what is fit for market and what is not.

“I am not prepared to put human health and life at risk, nor am I supporting that my catchers go to work potentially causing themselves harm.”

For the commercial fishermen, their families and all the people they employ, the stress is of this unfolding nightmare is taking its toll.  Over the years, the professional fishermen of Gladstone have been under extreme pressure from governments, marine scientists and conservation groups that portray them as the greatest threat to the marine environment.

What if they were all wrong?  The collapse of fisheries to disease and pollution in Gladstone Harbour has not happened overnight (and it is not isolated — put “fish kill” in Google and count the hits).  The huge alumina plant has been there for near 40 years.  While fishermen are a soft target for marine scientists and conservationists, managing the industry you rely on for your aluminum dinghies is tough and a job dodged by government, greens and academics.

“I can emphatically state I have rejected yesterday, the 12th October 2011, 100% of a commercial fishers’ catch. Every fish in the 600 + kgs presented for sale was visually infected by red spot disease and some other infection and or burn?

“When seeking instructions from Safe Food Queensland, I was instructed that I had to destroy the product either by way of incineration or as land fill in an approved trade waste station.Not only did the fisher have to pay to dump the product he also wore a financial loss of approx $4500.”

Recreational fishermen and women have probably given commercial fishermen the most grief, up front and personal at the wharf, and through their fishing organisations that swing their “large vote” at government ministers to get commercial fisheries banned and shut down. Despite this, they are now at risk too. As Whittingham puts it:

“Our inspection process is done by way of a visual assessment of the fish, how can I or my staff determine at what phase or stage the fish may be experiencing the disease. I also hold major concerns for any recreational fishers that may not have the experience and or training to assess the health and quality of the fish caught.”

So in Queensland, who is responsible monitoring the health of fish and fish stocks and to ensure fish are suitable for human consumption?  There are ministers for Fisheries and Health, then there is Biosecurity Queensland, the Environment Protection Authority, the Department of Environment and Resource Management.  Federally there is that complex of ministries under Tony Burke;  Sustainability, Environment, Water, Population and Communities and the Great Barrier Reef Marine Park Authority.

“I cannot in good conscience accept the fresh seafood being presented.

“I have also identified that the disease may be present within fish caught in and around the Port Alma area, as such I am including the ban on estuary fish and mud crabs supplied by fisherman working within that area.

Queensland Fisheries would have us believe that the percentage of diseased fish caught by commercial fishers in the Gladstone Harbour is reducing.”

Now, the commercial fishermen are tracking the spread of the disease and instituting their own bans. Apart from serious compensation for not being able to fish, we owe them a whole lot more for all the monitoring work they are doing and the press they are getting to alert the public on the serious health issue.

The recreational fishing sector owes these fishermen too, as does the public, too often quick to condemn them for overfishing on our way to a fish meal.

In the last paragraph of this press release, it states:

“Finally I would like to assure our customers that this ban will stay in place until such time that I am confident that all seafood species caught within the identified area have been thoroughly tested and cleared by the authorities.”

Have you worked it out yet guys, they dont care, and even if they did they would not do anything to stop the overseas billionaires doing what they like to our land our waters and our people. This is about more than destruction of community by pollution, this is about power and who wields it.
Stop coal, stop coal seam gas, now, before it is too lat. It is already too late to stop runaway climate, thanks partly to our coal export,s but it is not too late to protect our non polluting industries such as fishing, tourism and farming, but we must act now.

Astonishing, I can’t remember another incidence of an industry shutting itself down when the government is saying everything’s jake.

Sorry Michael farming is not a non polluting industry

‘… Fisheries and Health, then there is Biosecurity Queensland, the Environment Protection Authority, the Department of Environment and Resource Management. Federally there is that complex of ministries under Tony Burke; Sustainability, Environment, Water, Population and Communities and the Great Barrier Reef Marine Park Authority’

Seriously I think they should freight some fish catch from Gladstone down to George Street and insist the politicians eat ,drink and be….dead. What a service this would be to the inhabitants of Queensland. I’ll come up and watch just to make sure.