Labor candidate heaped with dirt. A warning to one Labor Party candidate in Queensland who has won preselection for the state election: enemies are circling and if the dirt sticks you could be in trouble. According to one trouble-making spy: “The married man has been maintaining a relationship with a factional cohort from Young Labor. […]

Labor candidate heaped with dirt. A warning to one Labor Party candidate in Queensland who has won preselection for the state election: enemies are circling and if the dirt sticks you could be in trouble. According to one trouble-making spy:

“The married man has been maintaining a relationship with a factional cohort from Young Labor. The candidate was instrumental in assisting his friend to recently take over a large branch. The woman in question has been less than discrete and there are concerns that revelations will emerge during the election campaign that make winning the seat difficult. Given the circumstances Labor find themselves in in Queensland, it is thought that they have to hang on to any seat they can, and the party official may have to wait until next time.”

No mention of such misdemeanours in the Liberal-National Party dirt files, sadly, which The Courier Mail has dutifully published in an eight-page lift-out in today’s paper. Those files are only on sitting MPs, and seem to have had the juiciest details redacted by the lawyers. The newspaper teased revelations of a “s-xual harassment claim involving male electorate officer” yesterday but hasn’t put a name to the claim today. Nor did we learn the “alleged bis-xual, with relationship with [Labor official]”, the MP who “can drink too much at functions” or the front-bencher with “a portrait of himself in his ministerial office”.

Sussex Street gets the wrong man? Meanwhile in NSW, eyebrows were raised as Sussex Street appointed David Harris to chair Labor’s Recruitment, Organising and Training Committee which is tasked with rebuilding branch membership. Harris, the first Labor MP to lose a seat in the Wyong area, didn’t do such a good job rallying support in his own branch, according to some party hacks. They say the once-flourishing branch has collapsed — long before the party collapsed in other parts of the states. As one member asks: “Are they really serious about wanting bigger local branches?”

David hits back against bank Goliath. Small lender RaboDirect is fighting back against demands from one of the big banks (which it isn’t naming) to pull down critical advertising. Here’s the letter of demand: 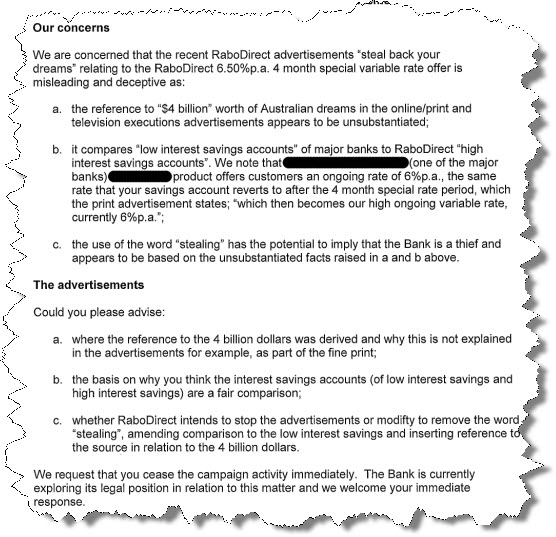 RaboDirect has now posted the letter to its Facebook page where it’s “asking our customers to respond”. Commenter Matthew Ned Reynolds was indicative of most of the responses: “Tell them to stick it.” RaboDirect assures us the letter is genuine and not some NAB-style bank break-up stunt. And after consulting the lawyers they’re not pulling the ads.

Clean cars, respectful papers. Is it true the bosses of some Melbourne suburban papers are subjecting journalists and staff to compulsory cleanliness checks on their cars? “Something to do with representing the company,” says our insider. “But it’s their private vehicles that they’re checking.”

How does Rabodirect qualify as a ‘small lender’. It’s owned by Rabobank which is no minnow