The brutal crackdown on West Papua mine strikers

Overnight an uncorroborated YouTube video was circulated that shows Indonesian police brutally breaking up protests in West Papua, Indonesia. Given the timing of the release, it was alleged to have been taken in the past several days at the Grasberg mine complex jointly operated by mining corporations Freeport (US) and Rio Tinto (UK-Aust) where one man was shot dead by Indonesian police during a month-long protest over working conditions and wages, which is still continuing.

Editor of West Papua Media Nick Chesterfield has assured me that the video is most likely of an earlier and unrelated protest in August 2011, and was most likely shot in the Timika district during pro-independence demonstrations:

“The incident depicted on this Video is of an unprovoked police attack on market traders and pro-independence demonstrators on August 6, 2011, who responded by throwing small stones at armoured vehicles. After a brutal sweep and dispersal, Indonesian BRIMOB paramiltary police were caught on film severely beating many civilians and detainees, and some were beating detainees so severely that provosts had to remove their colleagues.” 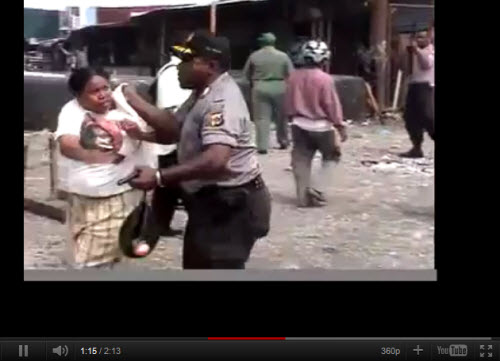 Since September 15, roughly 9000 West Papuan miners have been on strike at the Grasberg complex in a bid to force chief mine operators Freeport (US) to renegotiate the terms of the lease such that workers wages rise to between $17.50 to $43.00 an hour from the present $2.10 to $3.50 an hour. Local miners Rio Tinto (UK-Aust) are commercial partners in the Grasberg operation, along with the Indonesian government.

Strikes of this kind are estimated to cost the Grasberg owners anywhere between $20 million-$30 million a day in lost earnings.

Communicating directly with the chief spokesperson of the strike, Virgo Solossa, on September 24, 2011 it was relayed to me that: “senang berkenalan dengan anda dan saya akan selalu menceritakan perjuangan yg kami lakukan”. Which Google crudely translates to: “happy to meet with you and I will always tell my struggle we do.”

Since that exchange with Virgo the last instalments of my four-part essay on the Norwegian government’s ethical blacklisting of both Freeport and Rio Tinto over environmental (and human rights abuses) at the Grasberg mine have been published. Originally written in early 2009, here’s a small segment taken from part one:

On September 9, 2008, amid the turmoil of the global financial crisis, the Norwegian government announced that it had liquidated its entire $1bn investment in Rio Tinto for “grossly unethical conduct”. Operating the second largest fund in the world, the Norwegians’ decision focused solely on the Grasberg mine in West Papua on New Guinea, which it believed posed the “unacceptable risk” of contributing to “severe environmental damage” if it were to continue funding the Anglo-Australian mining giant.

Rio Tinto had been blacklisted.

The following day, Rio Tinto’s official statement relayed that the company was “surprised and disappointed”, given both its recognised leadership in environmental sustainability and its noncontrolling interest in the Grasberg mine. As with most claims of sustainability, the truth is otherwise.

Rio Tinto should not have been surprised by the Norwegian stance on Grasberg. Records show that there had been months — in fact, years — of dialogue with the Norwegians about Grasberg’s inadequate environmental and social performance. Rio Tinto had faced a litany of signposts indicating that multinational and Indonesian involvement in West Papua was not meeting various standards, laws, and norms: Institutions such as the World Bank, the Australian Council for Overseas Aid, the International Finance Corporation, the Overseas Private Investment Commission, the United Nations Committee against Torture, the US State Department, and the Indonesian Environment Ministry, as well as many US and European politicians, independent environmental assessments, international media, Papuan leaders, civil society groups, and shareholders had brought the problems to Rio Tinto’s attention.

That an institutional investor should act on environmental, social, and corporate governance considerations is a newly evolving development within the global investment industry, and one in which many Australian institutional investors and service providers have been quick to claim leadership. However, the blacklisting of Rio Tinto by the Norwegian government was uniquely public, transparent, and forward-thinking. Yet this wholesale dumping of one of Australia’s blue-chip stocks received only syndicated coverage in the local media.

Behind the headlines of the global financial crisis is a deeper, more systemic fault line that rewards rampant capitalism. Too many invest in and operate mines such as Grasberg without any consideration of the ethics of so doing.