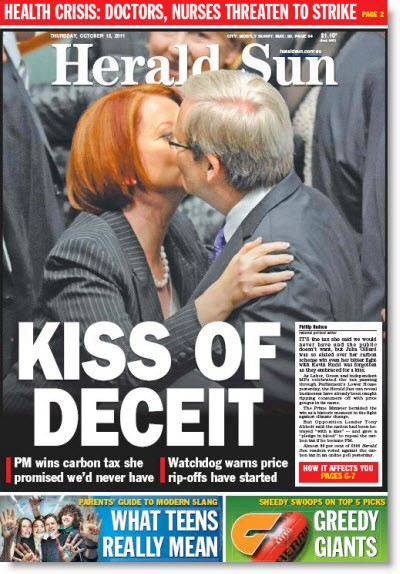 The Department of Corrections. Thanks to an incorrect date printed in Canada’s The Barrie Examiner on Saturday, The Womanless Beauty Pageant was almost a person-less beauty pageant … Fashion gallery of the day. The caption writer for The Globe and Mail goes off the leash with captions linking fashionistas with the Occupy movement, dripping in sarcasm.

“Mazher Mahmood, the former News of the World investigations editor, has denied any knowledge of phone hacking during his time at the paper, telling a court he hoped perpetrators would be “sent down” for their activities.” — The Guardian

“The ABC’s redundancy bill has more than doubled, rising to $7.3 million last year, according to the ABC Annual Report tabled in parliament yesterday.” — The Australian

“Developers who activate and set up their Facebook Timeline, they are now being told that if they don’t choose to publish it now, it will go live on October 19th, 2011.” — The Next Web

“Reporters Without Borders has announced it will open a bureau in Tunisia today in a bid to ‘overhaul the entire media sector’ following the revolutions of the Arab Spring.” — journalism.co.uk

“OverDrive, the leading distributor of e-books and digital audiobooks to libraries, reports today that e-book checkouts nearly tripled through September 30, compared to all of 2010. E-books have been checked out 12 million times so far this year. ” — Paid Content

FINAL HOURS: Save up to 50% on a year of Crikey

Subscribe before midnight tonight and choose what you pay for a year of Crikey.

It is definitely privileged whining “about an equal number of men and women are published.” this is equality.

Prizes should be based on their quality only not gender. The Stella prize is discriminatory nonsense.

If you want to be taken seriously write great books.

“The Herald Sun”? I was wondering what happened to “The Truth”?