At least it’s not getting worse.

That's about the best that can be said of the September labour force figures released today.

At least it’s not getting worse. That’s about the best that can be said of the September labour force figures released today. The Australian Bureau of Statistics reports a slight drop in the seasonally adjusted unemployed figure from 5.3% to 5.2% with the trend level unchanged at 5.2%. 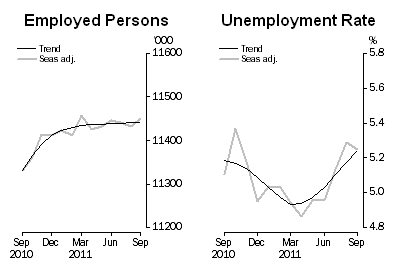 It seems we are at the point where the number of new jobs being created about equals the growth of the workforce which is at least better than what’s happening in the United Kingdom where  unemployment this week hit a 17 year high of 8.1%.

Australia is, as the Treasurer Wayne Swan keeps reminding us, doing better than most developed nations. 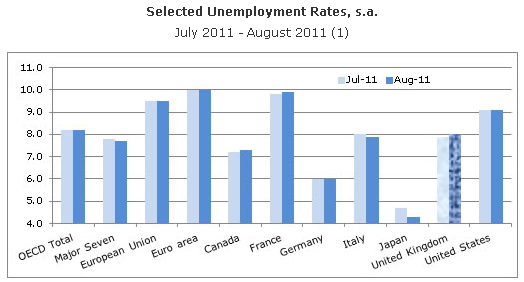 Peanut butter prices on the rise. Now the bad news. Peanut prices have reached record heights. The US Department of Agriculture puts the current spot price for a ton of unprocessed Runner peanuts, commonly used in peanut butter, at about $1150 a ton, which is up from about $450 a year ago. The kid’s crunch butter is about to get dearer!

Enough to make you cry. No, this is not a spoof story from The Onion. The words are from a lengthy Bloomberg piece this morning headed “Wall Street Sees ‘No Exit’ From Financial Decline as Bankers Fret Future” that begins with a lament by Wall Street executives, facing demonstrators camped for a fourth week in New York’s financial district, who say they’re anxious and angry for other reasons.

“An era of decline and disappointment for bankers may not end for years, according to interviews with more than two dozen executives and investors. Blaming government interference and persecution, they say there isn’t enough global stability, leverage or risk appetite to triumph in the current slump.”

And at the end, under the sub-head “Occupy Wall Street”:

A version of that social unrest is taking place in lower Manhattan’s Zuccotti Park, where Occupy Wall Street protests against bank bailouts and income inequality have gained support from Nobel Prize-winning economists Joseph Stiglitz and Paul Krugman. On Oct. 1, police halted a march over the Brooklyn Bridge, arresting about 700, and have used pepper spray.

“We have too many regulations stopping democracy and not enough regulations stopping Wall Street from misbehaving,” Stiglitz, an economics professor at Columbia University, told protesters the next day. “We are bearing the cost of their misdeeds. There’s a system where we’ve socialized losses and privatized gains. That’s not capitalism.”

Bankers aren’t optimistic about those gains. Options Group’s Karp said he met last month over tea at the Gramercy Park Hotel in New York with a trader who made $500,000 last year at one of the six largest U.S. banks.

The trader, a 27-year-old Ivy League graduate, complained that he has worked harder this year and will be paid less. The headhunter told him to stay put and collect his bonus.

“This is very demoralizing to people,” Karp said. “Especially young guys who have gone to college and wanted to come onto the Street, having dreams of becoming millionaires.”

Ah, the sad lot of today’s masters of the universe!

Money under false pretenses. Admittedly the Courier Mail has taken out all the possibly defamatory bits but the so-called dirt dossier compiled on state Labor MPs for the Liberal National Party in Queensland is a pretty bland read. The paper ran the biographical summaries virtually in full this morning and after reading them I think the party paid good money for some very ordinary and unhelpful assessments. 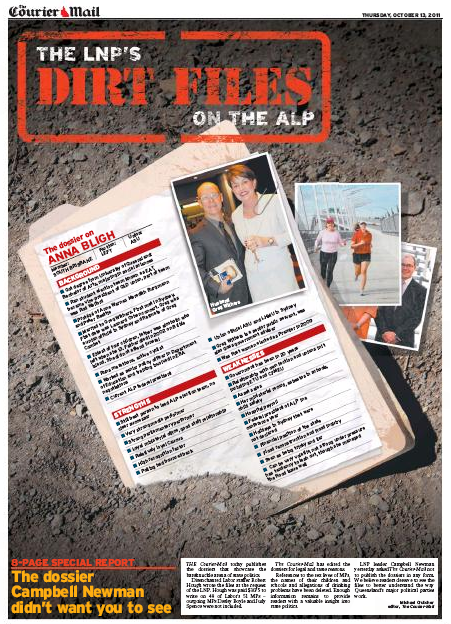 The files don’t appear to be on the website but I wouldn’t be bothering to go out and buy a copy of the actual paper.

“This is very demoralizing to people,” Karp said. “Especially young guys who have gone to college and wanted to come onto the Street, having dreams of becoming millionaires.”

My heart bleeds. Truly it does.

I think I have a violin in my pocket for you… oh no, wait, it’s JUST MY MIDDLE FINGER!!!

Re: Enough to make you cry – where can we give? There must be an appeal or telethon or something.

what i strongly object to here and elsewhere, is the journalistic (and others) practice of blatant distortion of statistics, especially when displayed as a graph. a dishonest practice evident in al three graphs here.

what is it? changing the base (the y-axis) to a NON-zero value to make all the differences appears much more marked and significant, when in fact they aren’t. in other words, a statistical ‘beat-up’.

(and if because of the wide range of values, it is possibly necessary to truncate the lower values say, then there is an accepted and proper practice – you still have a base of zero, but you show a ‘break’ in the y-axis and then show the value you wish to start the graph at. then at least, it is far more obvious that thee is missing data/values)

I have been away from Australia for nearly 3 years and travelling in the US for the last 6 months. It is almost unbelievable to see Australia crying in its collective beer over its economy. It would be completely unbelievable if I couldn’t vaguely remember that we do have a habit of ignoring the facts when they get in the way of our prejudices.