Uncertainty the only certainty

So Australia has almost got to the point of establishing a price on carbon emissions with the House of Representatives passing legislation this morning and passage through the Senate being little more than a formality.

Uncertainty the only certainty. So Australia has almost got to the point of establishing a price on carbon emissions with the House of Representatives passing legislation this morning and passage through the Senate being little more than a formality. But don’t think that this means an end to the uncertainty. We are in for many years of doubt yet before the issue is resolved one way or the other.

Prime Minister Julia Gillard thought the achievement worthy of a kiss with Foreign Minister Kevin Rudd looking pleased enough to comply. But one has t0 wonder whether passage of this legislation is actually, for Labor, the kiss of political death.

Opposition leader Tony Abbott is adamant that any government led by him will repeal the set of bills advanced by Labor. That stretches the final day of reckoning out to 2014 or so. Until then there will be none of the certainty for business that the government extols as being one of the virtues of its legislation.

And the next election will not necessarily resolve the question unless the Liberal-National coalition does exceptionally well and manages to get a majority in the Senate in its own right. More likely is defeat of the Abbott attempt at repeal by combined Labor and Green senators. That will bring us all the excitement of a potential double dissolution election before there is finality.

Australia doing better than most. The OECD’s composite leading indicators, designed to give a preview of likely future conditions in the major countries of the world, present a generally dismal picture. 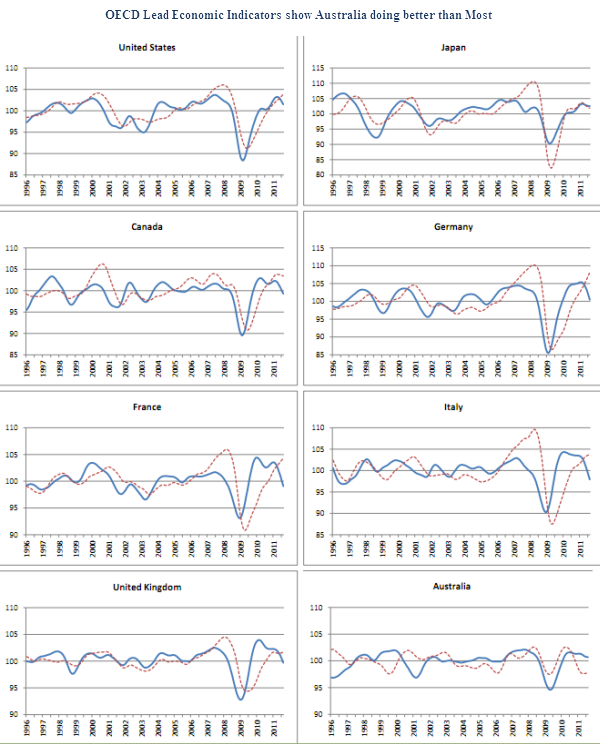 Most countries are pointing towards a decline in economic activity with Australia being one of the few where, despite a slight downturn, the indications are of continuing growth.

Housing figures tell the same story. The housing finance figures out from the Australian Bureau of Statistics this morning also present a brighter picture than in the recent past. Slovakia illustrates the difficulties to come. The European pundits are predicting that Slovakia will later this week come to the party and approve the next payout to Greece but the problem of getting 17 countries in the Euro area to agree on something will get harder not easier when the next bundle of money is needed.

Clearly it is one thing for the leaders of Germany and France to talk the rescue talk but quite another for them to actually deliver it.

I agree that a double dissolution election on a carbon price would be fascinating, one that Rudd robbed us of in what in brief retrospect still seems poor politics.

It would be helpful if Richard Farmer would include the customary identifiers when displaying graphs – see ‘Australia doing better than most’ – what labels attach to the blue and red tracks? Not a first offence, unfortunately.