Rudd got up to three-quarters of Gillard’s coverage in a week that was meant to be all about the carbon price.

The distressing circumstances of a 14 year old boy in jail in Bali quickly became part of the Kevin Rudd for PM speculation, with virtually all the media running the line that Rudd was using it to run hard. He’s certainly been giving plenty of media conferences on foreign affairs issues but he’s actually been pretty quiet beyond that. That didn’t stop most of the media claiming a broad media push, which of course became a self-fulfilling prophesy, getting Rudd up to three-quarters of Gillard’s coverage in a week that was meant to be all about the carbon price.

Tony Crook was a bolter, suddenly fiercely in the spotlight, despite his vote on the offshore processing legislation essentially being irrelevant as it’s already dead in the water in the Senate. But once again that hasn’t stopped the media whipping themselves into a frenzy, some claiming his vote will decide Australia’s entire border policy. No it won’t. The other bolter was Graham Perrett, who has now had his 15 minutes in the sun before becoming the latest short serving Member for Moreton.

On the more serious side, Greg Combet up for obvious reasons, and Albanese not Rudd is the one who has been popping up anywhere anyone will talk to him, presumably to prove what a great manager of parliamentary business he is, while Campbell Newman has had a shocker of a week. Whether that translates to any movement in the polls in Queensland remains to be seen. 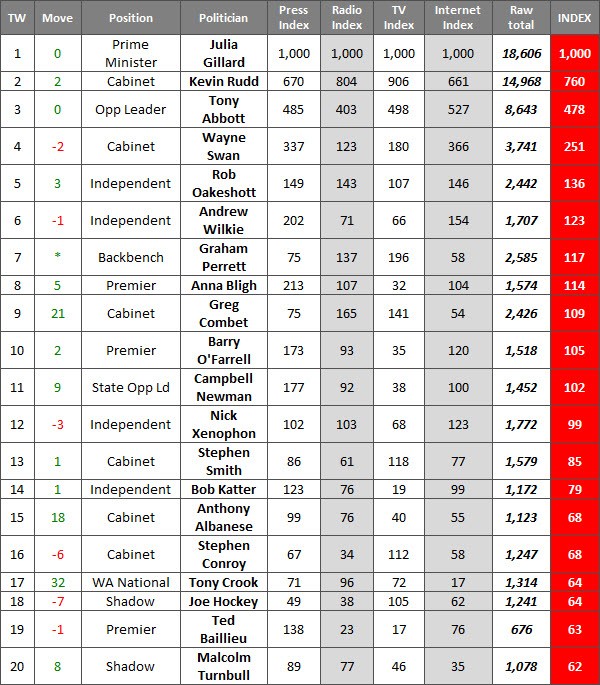 Not much difference between the top three, with Tony Abbott maintaining his strong presence in mainly unfavourable online chatter while talkback is all about the Labor leadership.

The traditional media coverage was large, but nothing compared to the online avalanche of tributes (and occasional brickbat) for the product and marketing genius, who has probably ended up overshadowing the other titans of information technology.