The Oz: weather one day, same the next ... Aussie film's embarrassing aboutface ... The Independent changes its masthead and more ...

Weather groundhog day at The Oz. They say you shouldn’t bet on the weather — that is, unless you are a reader of The Australian. Unfortunately for The Oz they managed to run yesterday’s weather today. Yesterday’s report: 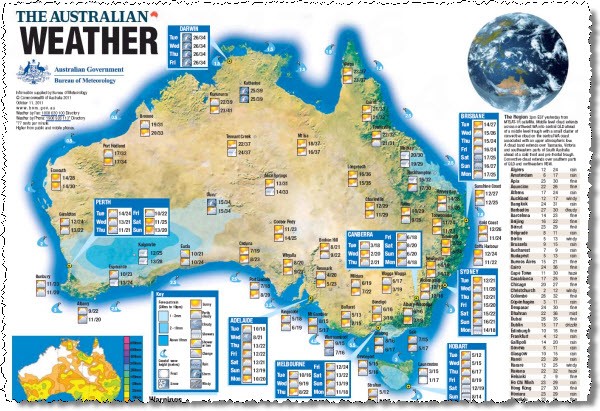 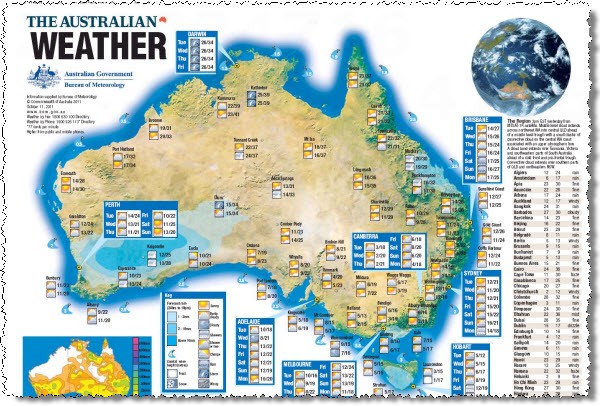 Aussie film’s embarrassing aboutface. Producers of the Australian film Surviving Georgia have responded to a Crikey story published last week by making 11th-hour changes to its marketing materials in the lead-up to its theatrical release in select cinemas tomorrow. Prompted by a story broken by blogger Glenn Dunks, Crikey reported that the pseudo tear-jerker drama splashed a glowing four-star “review” attributed to The Guardian on its poster, website, trailer and flyers. Except there was no evidence anybody at The Guardian had seen the film; the quote was taken from an anonymous user on an empty URL. It was a “clever way to get a ‘four star review'”, quipped comedian Tony Martin on Twitter.

Subsequently quizzed by Encore magazine, Surviving Georgia’s producer Spencer McLaren contritely attributed the film’s deceptive marketing manoeuvrings to a “slip-up” by his marketing team but took full responsibility. The website and online versions of the poster have been changed, along with the official press kit, and the film’s homepage now displays a somewhat more modest three-star review from Empire Magazine. McLaren said he contacted The Guardian to alert them of his film’s distinctive marketing style. McLaren told Encore:

“I think, what’s occurred, is it’s been accredited wrong. We’ve had different marketing people at different times. Ultimately it’s our fault as producers to cross-reference, that’s where the responsibility lies … It has all happened late last week, we’re a small company so we don’t have a web department to drop everything and make the changes.”

The trailer remains unchanged and includes the following shots:

And, of course, so does the printed flyers and posters advertising the film’s bogus bona fides, as photographed by Dunks: 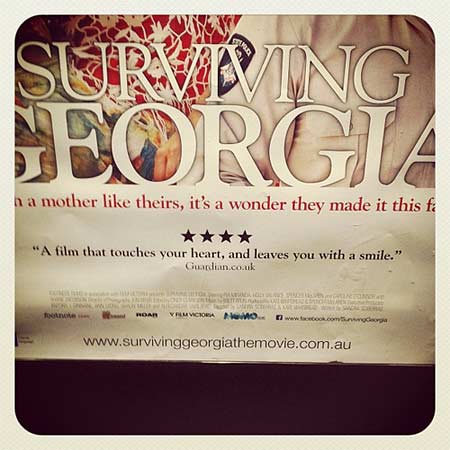 The Indy changes its masthead. Iconic UK newspaper The Independent changed its masthead overnight. Editor Chris Blackhurst said of the change: “We have decided to use the occasion of the paper’s 25th birthday for a makeover. The masthead is bolder — still ‘The Independent‘, complete with eagle, but now more striking and harder to miss on the news stands.” Here is yesterday’s old masthead versus today’s newer, bolder version: 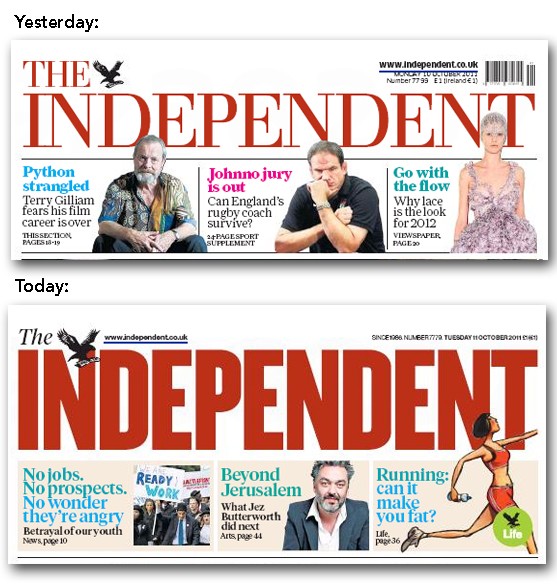 Front page of the day. Today’s New Zealand Herald laments the oil spill caused by the damaged container vessel Rena as the Land of the Long White Cloud’s “Worst Disaster”. Surely a loss to the Wallabies on Sunday in the Rugby World Cup semifinal would come close? 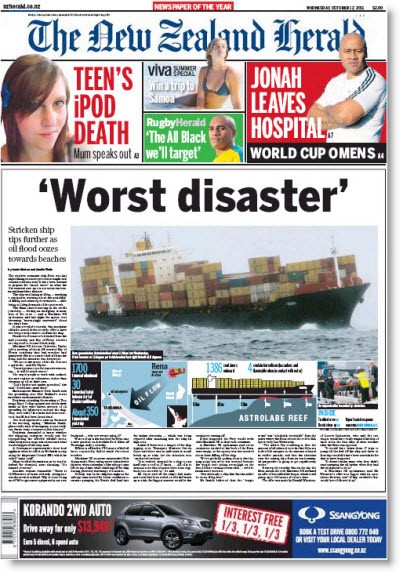 The Department of Corrections. When you’re talking astronomical numbers what difference does a few million make? From today’s The Australian:

“The private investigator at the centre of the phone-hacking scandal has written to the alleged victims who are suing the News of the World imploring them to stop ‘persecuting’ him by suing him.” — The Guardian

“News Corp. on Tuesday responded to recent pressure from proxy-advisory firms to overhaul its board in the wake of the phone-hacking scandal at its News International U.K. newspaper unit, stating in a regulatory filing that directors and senior management are ‘acting decisively to get to the bottom of what happened.'” — Wall Street Journal

Pollies out and about selling The Big Issue

“Federal politicians Peter Garrett, Kate Ellis and Andrew Robb will be among the familiar faces standing on street corners next week selling copies of The Big Issue, the street magazine run to help homeless and disadvantaged people.” — The Australian

“The Huffington Post has teamed up with French publishers Le Monde and Les Nouvelles Editions Independantes to launch Le Huffington Post, a French version of its US news site.” — journalism.co.uk

The death of populism? Kiwi and ACT elections signal tough times for ‘disruptors’

Re ‘Oz’s weather double’ …. I guess some commentators in The Australian will now cite this as evidence that the climate isn’t changing.