Kisses all round as clean energy bills pass the House

“Morning sir, how are you?,” Julia Gillard muttered coyly to Greg Combet as the two carbon conspirators convened at the despatch box after a year of thick, muddy slogging to prise open the floodgates on Australia’s clean energy future.

The formal victory was a fait accompli. But for Labor’s green-tinged MPs like Peter Garrett — spied heading to the House’s back entrance before 8am in one of the worst tracksuit and baseball cap combos you’ve ever seen — this was a day of immense pride.

On the other side of the chamber, the Coalition’s leadership group had convened in its familiar quarter-time huddle, talking impossible tactics on a vote they couldn’t win – the result even more of a formality following last night’s dummy spit from Sophie Mirabella.

There were seven divisions in total — all passed 74-72 in the government’s favour aside from two relating to subsidies for steelmakers which drew the support of Bob Katter (although Katter himself lost track, at one point finding himself on the wrong side of the chamber as Harry Jenkins’ one-minute voting deadline ticked down).

“Typical trade union officials!” was the lame zinger from Alby Schultz after defeat #4, prompting Labor’s Geoff Lyons to retort that Bob Katter was in fact a “friend of the worker” and “believed in jobs for workers!” (The remarks would later be admonished by Harry Jenkins as one of a number of unparliamentary slurs that were clearly unacceptable).

When the first vote duly passed, the government benches erupted in the first of two explosions of applause led by a raucous Mark Dreyfus. Then the musical chairs began as government MPs moved to the opposite side of the chamber to strike down Tony Abbott’s amendment to delay a vote until after the next election.

As expected, Tony Crook’s amendment on the off-road diesel excise, which was definitely not a quid pro quo for his support on tomorrow’s offshore processing legislation, also got nixed.

When the last vote finally came to adopt the 18 clean energy bills as complete package, former Slater & Gordon lawyer Adam Bandt broke into a broad grin, his election night pronouncements 14 months ago having born the sweetest of low-hanging fruit.

Then it was Labor kisses all round, first Gillard and Combet, then Gillard and Wayne Swan and finally Gillard and … Kevin Rudd, who yesterday had gleefully used a question from Julie Bishop on foreign affairs to remind Australians what they were missing out on. 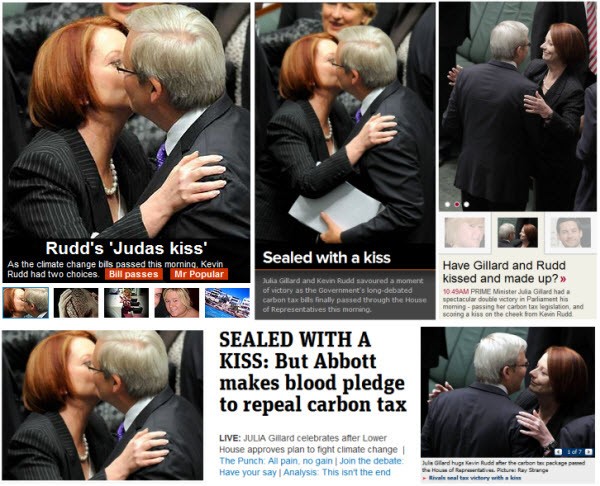 The reconciled lovers exited together amid warm applause from a pro-Government public gallery (and raucous laughter from the opposition) — the fears of an angry mob of anti-carbon tax activists descending on the house successfully abated.

Strange Riverina MP Michael McCormack then killed the mood, demanding Jenkins kick the applauders out, leading instead to his own ejection under 94A.

As Labor MPs began their House of Reps corridor victory lap, Coalition MPs lingered on, struck down in their carbon tax morgue of shame, as Swan got slowly to his feet to rave about last week’s already-forgotten tax forum.

At the Greens’ triumphant press conference an hour later, Bob Brown reiterated the view, canvassed by Crikey yesterday, that it was in fact Adam Bandt’s victory in Melbourne that provided the impetus for today’s triumph.

“Thanks to the decision made by the voters of Melbourne we’ve got $13 billion dollars going to clean and renewable energy,” Bandt said. “People in Melbourne should be proud in the part they’ve played.”

Milne, who fulfilled her previous promise to sit in on today’s vote, said she would move an amendment to the steel package in the Senate to create green jobs in the Illawarra, but would stump for the outcome regardless.

The Greens-centric narrative has been bitterly contested by senior Labor sources, who point to an imminent speech from Greg Combet that will lay bare more details of negotiations inside the MPCCC.

At a joint press conference with Wayne Swan late this morning, purportedly to announce the chairs of the Clean Energy Finance Corporation (Jillian Broadbent) and the Energy Security Council (Michael Vertigan), Swan opened by ramming home the point that this was a LABOR reform, a theme that he took up later in the exchange.

When the rubber hits the road next July, the celebrations could prove hollow. Swan may be keen to claim this win, but it may well become Labor’s longest ever “suicide note”, in the considered words of this morning’s coalition hecklers.

Heaven forfend! NASA rearranges the stars — and the traits of our leaders

“When the rubber hits the road next July, the celebrations could prove hollow.” Not likely, while Labor may not win the next election the when the carbon tax actually starts operation and the sky doesn’t fall in, workers get tax cuts and FTB increases and Pensioners get increases to their pension people will wonder what all the fuss was about.

‘When the rubber hits the road next July, the celebrations could prove hollow’. You should read Crikey Andrew – http://www.crikey.com.au/2011/08/22/carbon-tax-for-abbott-its-appalling-policy-or-appalling-hypocrisy/ – Matt Grudnoff makes it pretty clear that, even if Abbott wins next time, even with a successful double dissolution election, he can’t unpick what’s been done and implement something else (whatever that may be) before about 2015 or 2016. I think this legislation is here to stay and maybe, just maybe, in years to come we will look back on the passage of these bills as the point at which toxic Tony’s fortunes began disastrously to slump.

“carbon tax morgue of shame”?? What a strange phrase.

And the “floodgates” are now open on Australia’s clean energy future, are they? We can look forward to watching Australia’s CO2-e emissions trend downward from here on in, then?

That’s a clever way to look at it Mark Duffett.
Just ignore other factors like economic activity and population growth ect. Is that because you have only one functioning eye?
It must be difficult for you breathing AND typing at the same time.