"Cuba"? What the heck do any of us know about broadband policy in Cuba, Mr Turnbull? Oh wait. I get it. Communism. Well played, sir.

“Cuba”? What the heck do any of us know about broadband policy in Cuba, Mr Turnbull? Oh wait. I get it. Communism. Well played, sir.

As opposition spokesperson, Malcolm Turnbull’s continuing mission is to “demolish” the National Broadband Network. The NBN’s next critical milestone is Telstra’s AGM, a week from today. Telstra’s management has long since taken the NBN deal as a given, but not so the shareholders — especially those who haven’t been following the details.

Turnbull is rightly ramping up the rhetoric. Like all good propagandists, he’s playing on his audience’s existing beliefs. Government incompetent Labor waste something something communism.

“This is the telecommunications version of Cuba,” Turnbull said yesterday.

“You know, Cuba is the last communist state. Oh, I stand corrected, there’s North Korea too. See, Stephen Conroy doesn’t even have a North Korea to his Cuba. He’s the one and only. There is nobody else with Conroy in terms of extravagance and government intervention. He is the most singular individual in that respect.”

Glorious! And if it wasn’t rehearsed, if “North Korea to his Cuba” was ad lib, then I’m even more impressed.

“As a gentleman in Europe said to me the other day, they think the policy — the Labor Party’s policy — is completely crazy,” Turnbull said.

But the twilight zone is precisely where Turnbull needs to be this week, delivering lines that’ll resonate with twilight-year Liberals worried about the value of the Telstra shares. After all, they probably remember telling their kids scare stories about evil Fidel Castro and the imminent rain of atomic death back when young Jack was blasting just a bit more meth …

Yeah, I can do fact-free rhetoric too, though not as well as Turnbull.

“As a gentleman in Europe said” is excellent sourcing, no? Who was this gentlemen? What does he know about broadband policies and technology? We can all play this game.

As a gentleman in Katoomba said to me the other week, the government is controlling our thoughts via those so-called “vaccinations” they force on our children. True.

There are facts behind Turnbull’s comments, actually, taken from the latest broadband report from the Economist Intelligence Unit. It comes with a chart showing Australia’s spend as a great big bubble. 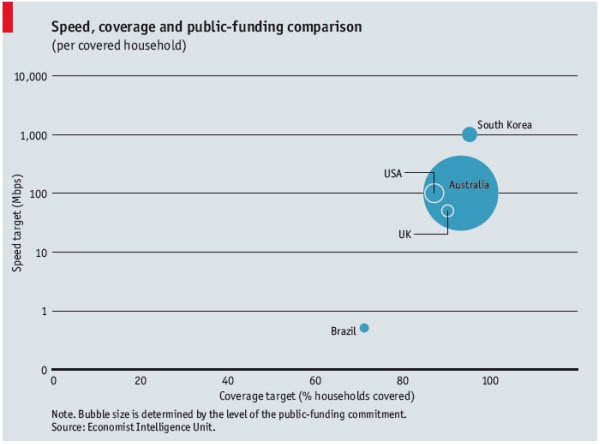 Buried in the fine print is the fact that this bubble shows only the government spend, not the total spend on that country’s broadband projects.

“A spokeswoman for NBN Co said the report underestimated the number of households that would be connected by 6 million, and did not recognise the company would make a commercial return,” Fairfax reported.

The chart shows “a small selection of countries” without saying how they were selected. And are those bubbles scaled to the square root of the spend, so their area matches the spend, not their diameter? I can’t tell you. The public document is merely the “abridged Executive Summary”.

“Read the longer version in The Economist,” Turnbull said. “[It] details how crazy it is, and puts the numbers around it.”

But the full report costs $US2950. Most of us will be relying on what the news media says Malcolm Turnbull says it says.

“The Opposition has pounced on one aspect of a report from The Economist — regarding the level of public investment in the NBN — but ignored the overall conclusion which found the NBN is superior to the services in the United States and the United Kingdom,” Ludlam said. “The ‘Economist Intelligence Unit’ is fanatically opposed to public investment in anything. If the ‘Intelligence Unit’ keeps publishing these wild-eyed neoliberal rants they may need to change their name to something else.”

All this left-right tribalism and the rhetorical tricks annoy the shit out of me — especially when Turnbull has perfectly good rational and easy-to-explain criticisms that Conroy can’t answer.

Wouldn’t it be cheaper to build the NBN in two waves? Fibre to the node first, then fibre to the premises later as needed? Turnbull reckons the New Zealand experience supports this.

And no one from any side of politics has shown us their spreadsheets explaining how all the growth versus demand versus price calculations work. Once more, we rely on the news media telling us what the politicians say they say.

Why would you use Scott Ludlam as the retort?

Talk about the very definition of weak reply.

I believe that Turnbull has been a strong advocate for the two wave proposition that the NBN build fibre to the node first and connect individual premises on a cost benefit basis thereafter. Of course cost benefit analysis is what Conroy is afraid of. Stalinist multi- year targets is what he feels comfortable with, taking advantage of the collective stupidity of the majority of Australian voters who wouldn’t understand an economic argument if it was thrust at them.
The hideous per capita cost of the NBN is fragmented into several segments which further confuses analysis with risk capital priced at the bond rate underwritten by the Australian taxpayer, and with billions of dollars of existing service infrastructure being scrapped on the altar of political expediency. Speaking for myself I currently have 30 Mb per second cable transmission to my home which is more than adequate for any perceived need, and exceeds the service parameter of the NBN already. Under Conroy’s plan this perfectly functional coaxial cable will be ripped out and replaced with an equivalent optical fibre service at a cost to be ultimately absorbed by the consumer through user charges or taxation.
The 364 kg (800 pound) gorilla in the room will be the cost of connecting from the optical fibre link passing your home into your premises. Optical fibre cannot be twisted to the same degree as copper cable and the cost of retrofitting into existing premises will be extortionate, as will be the intrusive overhead cables which because of wind flexing will have a much lower service life than underground cables.
More and more users are switching to wireless transmission for the “last mile”, and it is quite conceivable that the whole fibre to the home network will become ultimately redundant with fibre to the node providing the greatest flexibility for emerging technology, with only a small number of exceedingly high volume users requiring optical fibre connections, which surprisingly they already have today on a needs basis. History will show that Conroy’s folly was one of the biggest white elephants in Australian history dwarfing the Ord River scheme in the Adelaide to Darwin railway.

Overpriced and completely underwhelming in terms of speed and data limits.

And I am experiencing this first hand, not hearing it from “some gentleman”…

Although we have to remember, Malcolm isn’t anti-NBN, he is anti-boondoggle. Frankly if rorting by government contractors and unions wasn’t an issue, then we’d probably accept that we were getting good value.

Has Malcolm ever heard of China ?. It’s that other Communist country which has an economy streaming ahead of the rest of the world and if we want any chance of catching needed the NBN yesterday.

The problem with Turnbull is that it is so obvious that he doesn’t believe any of what he says-on climate change or the NBN.