Optimistic despite all the evidence

On the day when the leaders of Germany and France declared yet again that some time soon they will have a solution to Europe's financial problems, the journal nature neuroscience brings us this study of the way the mind works.

Maintaining optimism in the face of reality. It seems like a case of appropriate timing. On the day when the leaders of Germany and France declared yet again that some time soon they will have a solution to Europe’s financial problems, the journal nature neuroscience brings us this study of the way the mind works: 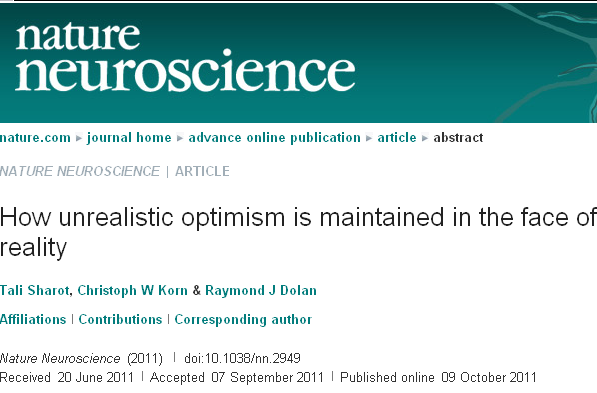 The abstract summarises it this way:

Unrealistic optimism is a pervasive human trait that influences domains ranging from personal relationships to politics and finance. How people maintain unrealistic optimism, despite frequently encountering information that challenges those biased beliefs, is unknown. We examined this question and found a marked asymmetry in belief updating. Participants updated their beliefs more in response to information that was better than expected than to information that was worse. This selectivity was mediated by a relative failure to code for errors that should reduce optimism. Distinct regions of the prefrontal cortex tracked estimation errors when those called for positive update, both in individuals who scored high and low on trait optimism. However, highly optimistic individuals exhibited reduced tracking of estimation errors that called for negative update in right inferior prefrontal gyrus. These findings indicate that optimism is tied to a selective update failure and diminished neural coding of undesirable information regarding the future.

Dr Tali Sharot, the lead researcher on the project, explained to the BBC how 14 people were rated for their level of optimism and tested in a brain scanner. Each was asked how likely 80 different “bad events” — like having cancer — were to happen. They were then told how likely this was in reality. At the end of the session, the participants were asked to rate the probabilities again. There was a marked difference in the updated scores of optimists depending on whether the reality was good or bad news.

A backbench example. The Labor member for Moreton Graham Perrett was given the job this morning of peddling the official Labor spin line on the way into the House of Representatives this morning that all the speculation about a leadership challenge was just nonsense.

Graham Perrett giving us an example of unrealistic optimism?

“There is going to be no challenge, there is going to be no election under Mr Rudd,” Perrett told the journalistic chooks assembled at the entrance to Parliament House for their morning feeding session. Labor would continue to govern until an election was due in late 2013. “Then we’ll go to the election to look at the proud record of the Gillard Labor government.”

Anything he can do I  can do better. Foreign Minister Kevin Rudd can speak to the dad of a pot smoking youth in Bali but the Prime Minister spoke to the boy himself. So there. Nah, nah, ne nah, nah! Australian politics has gone mad.

No loss for PM in losing a vote. The amazing thing about the parliamentary performance of this minority government is not that it might lose a vote in the House of Representatives this week but that it has gone through the last year without a loss. And not getting the numbers for its asylum seeker legislation would be no loss at all really. Beaten in the H0use or beaten in the Senate — what difference does it make. Either way, Julia Gillard will be able to blame Tony Abbott for the next load of boat people

I was wondering how the fNMR scanning gave further information about optimistic despite all the evidence. The article doesn’t go into any details and the paper is hidden behind a pay wall, and I don’t fell the need to pay $32+ to have a look.

Does that make me a pessimist, because I’ve overestimated the chance of getting cancer, or an optimist, because I don’t think that it’s an automatic death sentence?

RE: Optimism – The way these bullish market analysts are behaving is just like Homer Simpson when he was racing after his runaway bbq suckling pig. In this instance though, it’s the economic situation that is sailing over the horizon this time.

No loss for PM in losing a vote – Have thought long and hard about why the government would introduce the asylum seeker legislation into the lower house at all, if it doesn’t have the numbers. I read somewhere that Tony Crook has said he would let the leaders know what way he is going to vote before the vote is taken in the house.
Seems perfectly clear to me that the government will withdraw the legislation, if TC decides to vote against. But if he votes with the government, and as expected it is voted down in the senate, then the government will have the beginnings of a double dissolution trigger. Can’t think why they would proceed otherwise. Interesting!
Also, there are many right-wing jounalists who would disagree with your “blame Tony Abbott for the next load of boat people” scenario. Most seem to think that Gillard will get all the blame, because the coalition “owns the off-shore processing policy”, and they know how to do it properly. I don’t share that view, but I think the voter population does.