In today's Media Briefs: Fairfax's new editorial structures ... The Chasers war on ABC budget ... The Simpsons kicks on and more ...

Linnell gets vertical at Fairfax. Fairfax Media will implement new editorial structures under the control of new “national editor” Garry Linnell. An internal message from Metro CEO Jack Matthews — obtained by Crikey — reveals that the “key verticals” of Business Day, Money & Investor, Travel, Drive and Food and Wine will all fall under Linnell’s control with more to come.

Linnell will also act as a powerful general overseer to ensure the “very highest standard of story telling to them [audiences] at whatever time, and in whatever place, they need it”. Meanwhile, Fairfax has also begun to advertise for a “national business editor” — as revealed by Crikey 10 days ago.

As many of you know Garry Linnell has just started in his role as National Editor, Metro Media, a new editorial position that recognises the changing nature of our audiences and the need to rethink our way of delivering content to them.

The National Editor role spans all of our platforms and is designed not only to address the different needs of different audiences but to deliver the very highest standard of story telling to them at whatever time, and in whatever place, they need it.

It also forms a key part of the strategy for our business that I have been outlining to you all in recent months.

As part of the National suite of responsibilities, the following editorial areas in print and digital will now report to Garry:

Garry will soon outline new editorial structures being put in place around these key verticals, as well as work with the various platform editors across these areas on the new reporting lines.

Further announcements on other editorial sections joining the national division will be made shortly.

I have also asked Garry to work with editors across our mastheads to assist with the transformation work going on in our newsrooms to ensure we continue to strive for the highest quality of journalism – and produce it for the right audience at the right time of day.

The recession media say we have to have. On Saturday September 24, The Sydney Morning Herald told readers on page one in 144 point (with flashing lights) — in a breathless double byline by Phillip Coorey and Clancy Yeates — “World on the brink”. Curiously the article didn’t have anyone telling us that the world was indeed “on the brink” of anything.

Two weeks later we are still here, the “brink” is just as far away as it was on September 24 and The SMH‘s economics guru Ross Gittins had one of his sensible columns in last Saturday’s SMH that went a long way to redressing the balance so far as the excitable headline from September 24. Headlined “Doomsday scenarios are off the mark“, Gittins looked at why the RBA might be considering a rate cut. It was aimed at a couple of leading business economists (Bill Evans of Westpac comes to mind, who has been warning that a slowing domestic economy would produce rate cuts). As Gittins explains, the reality of the Australian economy is that it isn’t as badly placed as Evans and other business economists and media commentators claim.

If the Reserve Bank ends up cutting the official interest rate by 0.25 percentage points on Melbourne Cup Day, it won’t be because the economy has weakened so much as because it’s not looking as strong — and thus, inflationary — as the Reserve had earlier expected. The air is full of uncertainty and fear about the fate of the European and American economies, with one excitable pundit even predicting a ”world recession”. But, short of a major meltdown, the North Atlantic countries’ troubles won’t be a big part of the Reserve’s reasons for fine-tuning the stance of its monetary (interest rate) policy.

No one knows what the future holds, and there’s a ”non-trivial probability”, as the economists say, that the US economy will start contracting again and, more significantly, the problems in Greece will be so badly handled that the European economies implode. Weakness in the North Atlantic doesn’t equal weakness in Australia by a process of magic. You have to trace linkages between them and us. An important one is psychological: the effect of a sliding sharemarket, worrying news from the North Atlantic and over-excited talk of world recessions on the confidence of Australian consumers and business people. And more from Gittins:

“Indicators released this week show strong growth in exports and strengthening retail sales, home building approvals and non-residential building approvals … But this is a puzzle because, though growth in employment is weak, growth in hours worked isn’t. And though surveyed unemployment is supposed to have jumped, the number of people on the dole is steady … All this means we in Australia remain a long way from the brink, as indeed is much of the world economy, especially Asia.”

Take that, you page one exciteables. — Glenn Dyer

Front page of the day. Australia’s rugby win over South Africa made the front page of the International Herald Tribune — The New York Times‘ international masthead — but it was European leaders Nicolas Sarkozy and Angela Merkel brokering a deal over bank recapitalisation that had the paper most interested … 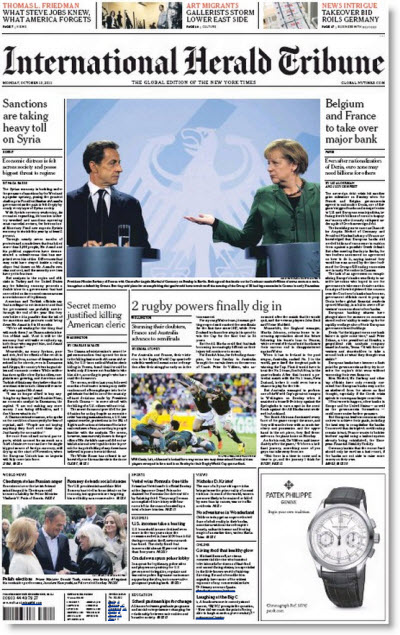 Another NotW payout over phone hacking

“Interior designer Kelly Hoppen, stepmother of Sienna Miller, has accepted £60,000 damages in the High Court to settle her phone hacking claim over the News of the World scandal.” — The Telegraph

“What if readers were able to help news desks work out which stories were worth investing precious reporting resources in? What if all those experts who delight in telling us what’s wrong with our stories after they’ve been published could be enlisted into giving us more clues beforehand? What if the process of working out what to investigate actually becomes part of the news itself?” — The Guardian

Bart finds his voice for another two years

“Fans of The Simpsons can breathe a ‘d’oh!’ of relief: the animated series was renewed Friday for two more seasons.” — Newsday