As predicted by Crikey in January, Perth residents have fleetingly enjoyed the glow of new daily newspaper. Plus other media news of the day from around the globe.

The edition commemorates the success of Perth Now‘s iPad app and is unlikely to appear regularly, placing a question mark on Rupert Murdoch’s pronouncement in 2009 that the Sunday Times‘ new building — home of the weekly WA News Limited tabloid — “makes me want to put out a daily newspaper in this city”.

The quality of the stories across the 36 pages sits somewhere between News’ eastern seaboard free sheet MX and the Sunday Times‘ regular offering with a nice yarn on gender bending surgery appearing next to a story on “bargain bites” in the CBD. — Andrew Crook (thanks to @bogurk on Twitter for scanning the images).

Front page of the day. As if the death of Apple’s Steve Jobs wasn’t bad enough, today’s The Independent from the UK has the Bank of England’s governor Sir Mervyn King warning that the financial turmoil being experienced currently could end up being worse that the Great Depression: 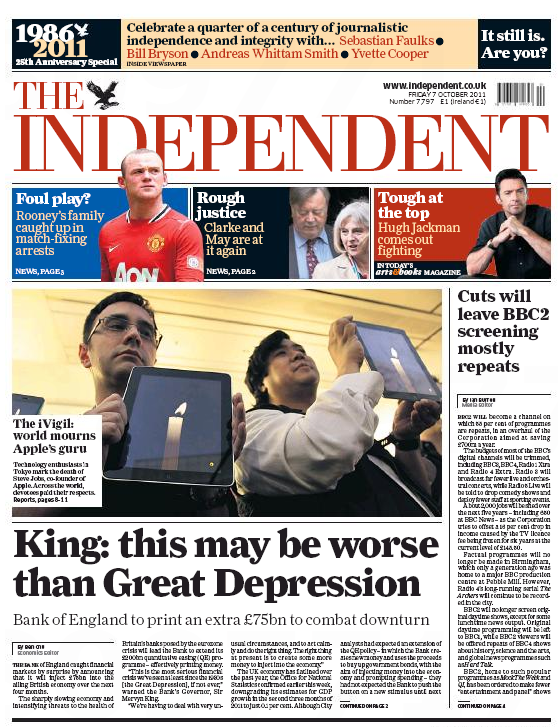 “Channel Seven Adelaide is asking a judge to quash a finding that it breached tobacco advertising rules when it broadcast a news story about cheap cigarettes.” — TV Tonight

“The BBC will axe nearly 2000 jobs as it looks to save £670m a year in long-awaited cost-cutting plans announced on Thursday morning.” — Paid Content

“Australian brands spend more on advertising to each individual consumer than any other country in the world, an analysis of global spending data by Mumbrella reveals.” — mUmBRELLA

Message to reporters “screamed at” by sources: toughen up

Look, they’ve only been there since 1829. Why ever would they need a second newspaper? It’s just a passing fad in the Eastun Stites.