Still healthy, wealthy and wise — but dropping in productivity

That's the verdict of the Australian Bureau of Statistics according to its survey Measures of Australia's Progress released this morning.

Still healthy, wealthy and wise — but dropping in productivity. That’s the verdict of the Australian Bureau of Statistics according to its survey Measures of Australia’s Progress released this morning.

Over the last decade, our average life expectancy has improved by two to three years, higher education qualifications are held by more of the population and average incomes have grown by an extra $8,200. 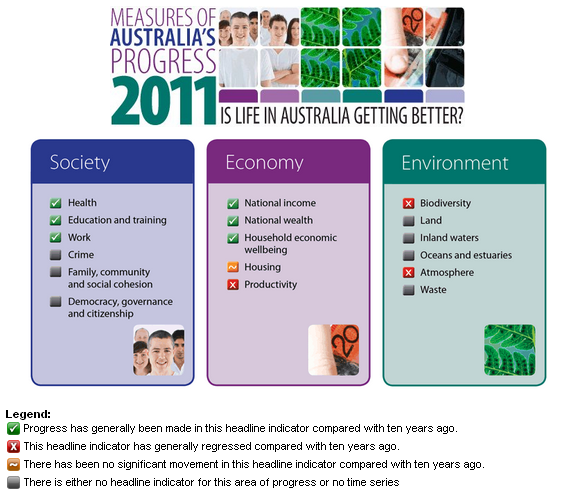 However, as the Bureau points out, there is more to progress than economic factors — the number of Australian animal species threatened with extinction has increased — from 332 in 2000 to 432 in 2010 and greenhouse gas emissions in 2009 were 13% higher than they were in 1999.

The great tourism moaners. Take notice of the moaning reported in the media and you would think Australia’s tourism industry has been knocked close to death’s door by the value of the Australian dollar. Look at the official statistics from the Australian Bureau of Statistics and you see quite a different story. What has changed quite significantly is where the visitors are coming from. Spinning out of control. My London based colleague Guy Rundle has forsaken me this morning so I am reduced to giving a little coverage to the British Conservative Party conference myself because the subject of spin doctors is close to my heart.

Yesterday I noticed in the UK papers that the prime ministerial spin doctors were using the technique now common in Australia of releasing extracts from a key speech to appear before it was actually delivered. The message was clear. Debt is bad and balanced budgets are good. Pay off those credit cards, Prime Minister David Cameron, was quoted as going to say.

But it appears that the spinners spun the speech out of control for, whatever the speech writer might have intended, the emphasis on saving was not something that the country’s retailers wanted to hear as The Independent’s conference diarist pointed out this morning. Hence this change of words that made the front page previews quite wrong. The worth of fast food advertising.  If you ever wondered about the impact of image making by fast food companies the consider this: American children have been found to prefer the taste of carrots when offered them in McDonald’s packing to carrots served in plain packaging.

The Ezra Klein blog at the Washington Post drew my attention to a 2007 study of the “effects of cumulative, real-world marketing and brand exposures on young children by testing the influence of branding from a heavily marketed source on taste preferences” that seems to have renewed relevance given the ongoing debate on ways of controlling obesity.

The research shows that the more often a child ate at McDonald’s the more likely it was that the child preferred the identical product in the Mac wrapping. I may be naive, but I am stunned that there are children who eat at Maccas 2-3 times per WEEK.