The Ten Network has poached an Australian TV news executive from New Zealand to be its new permanent head of news and current affairs. Plus other media news.

Ten appoint Flannery to run news. The Ten Network has poached an Australian TV news executive from New Zealand to be its new permanent head of news and current affairs. Ten said today that Anthony Flannery, currently head of news and current affairs at TVNZ, will start his new job in January. He will replace Dermot O’Brien who will become network editorial manager and remain ATV’s news director in Melbourne. O’Brien replaced Jim Carroll, who left Ten earlier this year.

“We are fortunate to have someone of Anthony’s calibre overseeing the strategic development of our growing news brand. We welcome the fresh perspective that Anthony brings to the role as we look to take our news and current affairs to the next level,” Ten’s statement read. It’s not often you find a good example of unconscious irony in a bit of PR fluff, but the use of the phrase “our growing news brand” is just that. Under Lachlan Murdoch Ten has killed off the 6pm news experiment, ended the long running Late News/Sports Tonight program, eliminated state-based local news on the weekend and gone to a 90 minute national news broadcast.

The big question for Ten is whether 6.30 with George Negus will survive 2011 and make it into 2012, with or without George Negus. — Glenn Dyer

Malkovich product placement. Feature writers love to pepper their profiles with colourful descriptions, but what happens when you’re interviewing an actor who is also a paid brand ambassador? In last Saturday’s Good Weekend profile of John Malkovich, Ginny Dougary wrote: 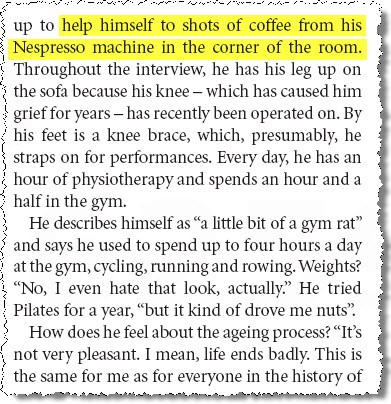 Seven readers make Nine appearance. The risks of the live cross — you never know when a bus promoting your bitter rival will drive by … 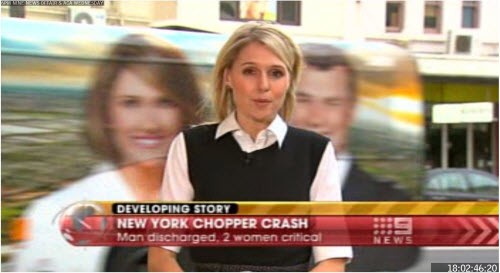 Front page of the day. The UK’s heading for recession, says the Daily Mirror. So what better way to illustrate this than to photoshop Prime Minister David Cameron and Deputy Prime Minister Nick Clegg as character’s from UK show Downton Abbey? 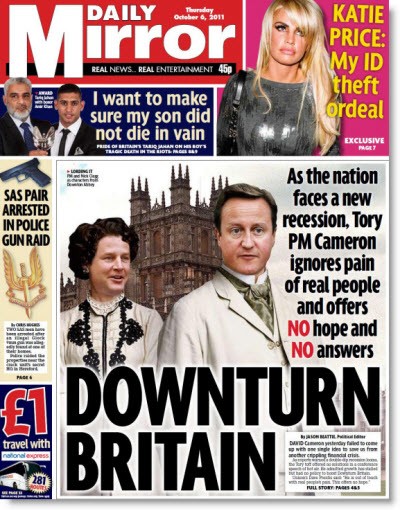 “The father of Josie Russell, the girl who survived a hammer attack in which her mother and sister were killed, is among a raft of new claimants suing News International for alleged phone hacking, bringing the total to more than 60.” — The Guardian

“Arthur C. Nielsen Jr., who transformed the company his father founded in 1923 into an international leader in market research, helping to make its name synonymous with television ratings, died on Monday in Winnetka, Ill., where he lived most of his life. He was 92. ” — New York Times

“Four journalists who have been subject to harassment, assault, torture and censorship have been announced as the winners of the 2011 International Press Freedom Awards.” — journalism.co.uk

On the upside, Dougray’s profile made Malkovich sound like a dickhead in his own words