The tax summit helped push Wayne Swan up to second, swapping places with the happy little vegemite down at the Foreign Office.

The tax summit … er forum … er friendly chat helped push Wayne Swan up to second, swapping places with the happy little vegemite down at the Foreign Office. Penny Wong also makes a rare return to the top ten, making soothing noises about an “ongoing process” rather than any actual results. Like we didn’t know? Meanwhile everyone has talked about all the stupid state taxes that need replacing but the obvious option of increasing the GST remains unchewable. The popcorn philosopher might note that the only sort of governments that can get away with proposing something that non-populist is one going as well as Barry O’Farrell’s or as poorly as Julia Gillard’s. Come on then P.M.

Meanwhile, Kevin Rudd may have moved down to fourth, but Bob Katter was busy keeping the comeback rumour alive, and perhaps just trying to get a little more publicity for his new party and claim a little more relevance than he currently has?

Stephen Conroy the other big mover thanks to the Andrew Bolt court case, the large majority of this debate being particularly insular to the media class, certainly not seeming to have made much of an impact either way out in the real world. There may need to be more than one case before a larger debate about where the limits of free speech should be, if anywhere. 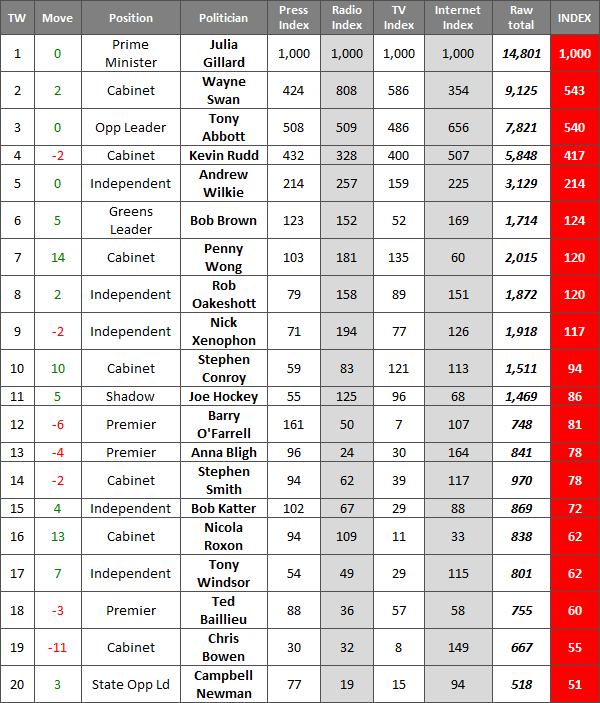 Wayne Swan may be the feature act at the tax forum, but he’s still not getting them through the turnstiles out in public fora. It’s been a relatively quiet week for the P.M. which keeps the Opposition Leader at number one, though with lower volumes than last week.

Knox would have made fourth on this week’s list, showing that prurience is alive and doing very nicely thanks.