Is nothing sacred? Rupert Murdoch's Fox TV wants the voice actors on The Simpsons to take a 45% pay cut, which has put a question mark over the future of the series, which started in 1988. Plus other media news.

frankie’s Ford-sponsored internship. Successful indie publication frankie (of the fashionable small “f”) has offered blogger Jessie Aylmore an internship starting today. But hang on, what’s this? The internship competition was run as part of A Connected Life, a marketing campaign for Ford Fiesta aimed at digital savvy consumers. The frankie website reads: “Jessie will be blogging for us (and also zipping around in a Fiesta) one day a week for two months …”

In her introduction on the Ford site, Aylmore subtly spruiks the campaign line, mentioning she “can’t wait for us to be connected!” (Our emphasis.) This morning she tweeted: “The wheels on the bus go round and round, all the way to fisherman’s bend!! #aconnectedlife”

Doesn’t this blur the line between advertising and editorial? No so, replied editor Jo Walker by email: “To be honest, there aren’t any lines here to blur. What Jessie will be providing for our website will conform to all our usual online editorial rules.”

Online cultural publication Pagesdigital is also involved in the paid Ford sponsorship. Founder Marnie Dibden Cate told Crikey: “Anything Ford related will be clearly marked as promotion, all other content is genuinely supplied and created by the interns … Nowhere have we tried to hide the fact this is anything but a promotion fuelled by Ford Fiesta.” Welcome to journalism. — Crikey intern Greg Foyster

You’re cut! Simpsons staff asked to forgo pay. Is nothing sacred? Rupert Murdoch’s Fox TV wants the voice actors on The Simpsons to take a 45% pay cut, which has put a question mark over the future of the series, which started in 1988. 20th Century Fox Television said it could no longer afford to produce the show without a huge pay cut for its cast.

We know times are tough at the Murdoch empire. As reported in Crikey, News Ltd in Australia is cutting 20% of its costs, or close to half a billion dollars, over the next three years, and slicing staff from operations in Adelaide and Darwin. And, of course, the Murdochs have cut back as well. For example, The Guardian reported last month:

Rupert Murdoch the chairman and chief executive of News Corporation, received a $12.5m (£7.7m) cash bonus for the last financial year, while his total remuneration rose 47% to $33m, according to the company’s annual statement to shareholders.

His son James Murdoch — who is deputy chief operating officer, with responsibility for News Corp’s business in Europe and Asia — was awarded a $6m cash bonus as part of an $18m pay package — a 74% rise on his 2010 take-home pay.

But in a statement on Friday night, James Murdoch said he would not be taking the bonus in “light of the current controversy” over phone hacking at the News of the World. “I feel that declining the bonus is the right thing to do,” he said.

The bonuses were for the year to the end of June, during which time News Corp became mired in the phone-hacking scandal that engulfed the News of the World. The affair only escalated into a full-blown corporate crisis — with the closure of the News of the World and several executive resignations — in July, shortly after the end of News Corp’s financial year. Chase Carey, News Corp’s chief operating officer and Murdoch’s right-hand man, took home $30 million in the year to June 30, including a $10 million bonus. Roger Ailes, who runs Fox News, received a slight increase in total compensation in 2011, up to $15.5 million from $13.9 million in 2010. Ailes received a $1.5 million cash bonus.

The Murdochs’ remuneration was revealed in their report to shareholders. Elisabeth Murdoch, the chief executive of TV production company Shine, received a salary of $1.7 million from News Corp last year, the report shows. She received $214 million in cash after News Corp bought Shine earlier this year. All up the Murdoch family got close to $US260 million from News Corp in 2011 while the company wants to cut the pay of The Simpsons actors by 45%, and cut hundreds of other jobs across the company. That’s what you call leading by example, isn’t it? — Glenn Dyer

Cut & Paste’s shock and awe. God knows the B-team juniors at The Australian‘s Cut & Paste section don’t have much to do. Search the archives to see what Deborah Cameron wrote in a student magazine in 1985, put a quote about global warming next to a weather report saying “snow”, run Larissa Behrendt’s tweet again, and whatever else Chris Mitchell is obsessing about that day. Tricky to screw up, but here’s today’s gotcha on Tony Jones: 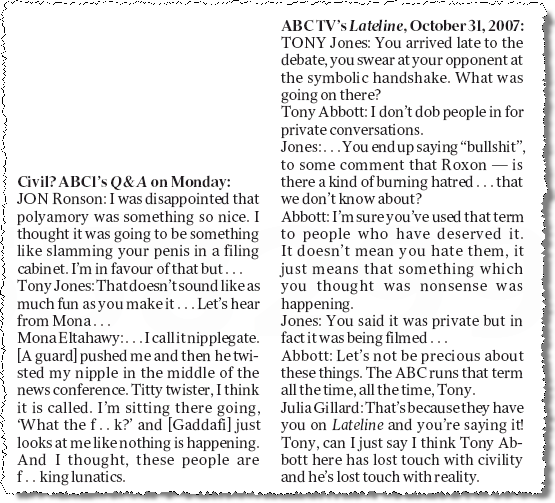 Yeah, uh, if you’re going to try and get Jones, simply because Greg Sheridan made an utter fool of himself on Q&A on Monday, best put the gotcha after the set-up. Otherwise it all looks a bit mad[der]. Mitchell will not be happy — Guy Rundle

Headline of the day. Disappointing that the Walkley nominations have closed as today’s NT News front page headline would have been a contender: 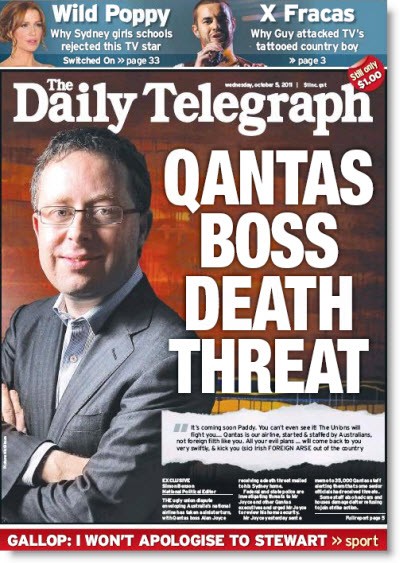 The Department of Corrections. The Australian doubles up on its corrections this morning:

Five things journos need to know about the new iPhone

“Apple today announced the iPhone 4S and the new iOS 5 operating system for all its mobile devices. Among the many upgrades and changes, a handful will have a direct, immediate impact on newsgathering and news business models.” — Poynter

“Press freedom organisations have written a joint letter to the prime minister of Vietnam to call for the release of jailed blogger Pham Minh Hoang.” — journalism.co.uk

Yahoo has a crowd, wants a voice

“One company dominates online news, sports and finance. It has more visitors to its news site than the runner-up in the category, CNN, more in sports than ESPN and more in finance than Dow Jones, owner of The Wall Street Journal. ” — New York Times

How magazines are adapting to the mobile revolution

“Editors and executives from several leading magazine publishers took the stage at the Magazine Publishers of America’s Magazine Media Conference in New York City Tuesday. Discussion centered around early lessons from tablet publishing and the challenges of extending their content to a proliferating number of tablet sizes and platforms as they move forward.” — Mashable

“The Simpson’s” probably made more money for “The Firm” than Rupert this year – what chance him and other executives taking a 45% pay cut?

Why would “The A’strayin'” go after Jones – it was all Sheridan’s own work, appearing “stripped of all his finery”.