After a phenomenal peak, is Andrew Bolt in decline?

It is hard to remember a time when so much public debate focused on one journalist as what Andrew Bolt is going through at the moment.

It is hard to remember a time when so much public debate focused on one journalist as what Andrew Bolt is going through at the moment.

Who else gets a full-page advertisement in today’s print edition of The Australian paid for by 1261 largely conservative older white blokes rounded up by the IPA? 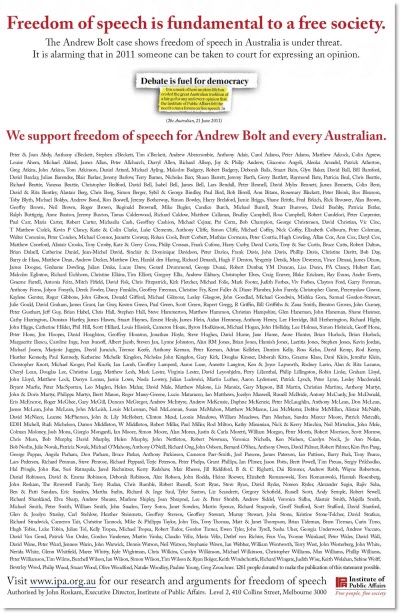 The signatories who coughed up more than $100,000 were formally supporting the following words:

Freedom of speech is fundamental to a free society.

The Andrew Bolt case shows freedom of speech in Australia is under threat. It is alarming that in 2011 someone can be taken to court for expressing an opinion.

We support freedom of speech for Andrew Bolt and every Australian.

It was surprising how few journalists or media professionals appeared alongside the various climate sceptics such as Ian Plimer and Tamas Calderwood and members of the political right, such as Peter Phelps, Philip Davis, Bob Day, Ron Boswell, George Christensen, Keith Windschuttle, Michael Kroger and the Kemp brothers.

This is because the vast majority of media professionals are appalled by Bolt. Former Daily Telegraph editor David Penberthy spoke for many when he wrote this column for The Punch, which also appeared in some of the News Ltd tabloids on Sunday. It included the following devastating critique of Bolt:

I am not inclined to defend Andrew Bolt to the death. Not even close. His columns make me laugh in disbelief or fold up the paper in anger. I am sick of seeing Bolt being held up as if he were a company spokesman.

He is no such thing. He is just one of many journalists who work at this company, albeit one who, through what can be fairly described as a decade-long commitment to writing inflammatory copy, has landed himself in a scrape which has ramifications for us all.

In my personal view journalists should examine tensions in society, not amplify those tensions. Bolt is a one-man amplifier. He has somehow got it into his head that with significant column inches and online space at Australia’s biggest-selling daily newspaper, not to mention his own TV show, he is the victim of a conspiracy of silence, and has been ganged up on by the elites.

If you wield that kind of power you’re not a victim of the elites. You are the elites.

And if that wasn’t enough, consider these words spoken by Bolt’s colleague at Network Ten, Hamish McDonald, in front of an audience of 1300 at the Sydney Opera House on Saturday night:

“Andrew Bolt is a dreadful example of what the media can be.”

“Alan Jones and Andrew Bolt as journalists do us an enormous disservice. I’m very angry about them using the title ‘journalist’.”

McDonald, who is the star reporter on 6.30 with George Negus and is tipped to potentially take over as the host in 2012, also pointed out that the ratings of The Bolt Report are in decline. He clearly wants the show axed.

After being stunned by the Anne Summers profile in The Monthly — especially the revelation that his past features a six-year de facto relationship with a former employee at The Age, which included the exchange of two rings — Bolt used his Herald Sun column today entitled “Media making a monster of me” to claim he is being attacked by various lefties at Fairfax, Crikey and the ABC.

Check out the extraordinary photoshop job that accompanies the column: 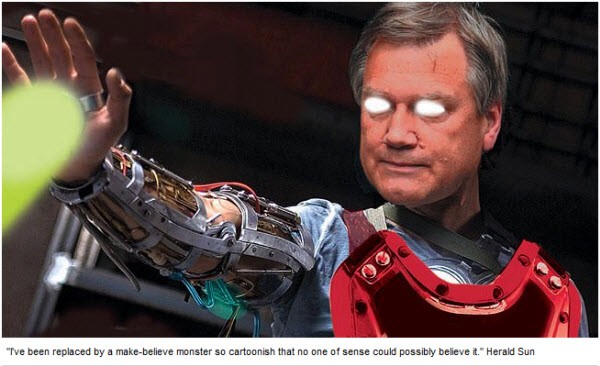 Iron Man reference aside, why did Bolt ignore the Penberthy attack, which looked very much like an official public flogging from News Ltd after Bolt humiliated executive chairman John Hartigan over the Bruce Wilson affair?

While The Power Index might have declared Bolt to be Australia’s “most influential mega-phone” and former Herald Sun editor Bruce Guthrie told Summers that he discovered four years ago that Bolt was the most powerful person within the whole of News Ltd, this situation has already changed.

For instance, News Ltd has substantially wound back the national print distribution of Bolt’s columns. While the Herald Sun is still dutifully serving up two opinion packages on Wednesday and Saturday, the old coverage from Cairns to Adelaide is no more.

Then there’s Herald Sun editor-in-chief Phil Gardner’s admission to The Monthly that Bolt’s “official arrangement” to have his wife Sally Morrell moderate comments on his blog from home was removed a year ago. Bolt’s army of abusers will now have to identify themselves as well.

The three upcoming tests of Bolt’s power will be whether he can retain a radio gig if the low-rating MTR goes under, whether incoming Network Ten CEO James Warburton continues with The Bolt Report and whether News Ltd commits to spending another six-figure sum appealing the recent court decision when Bolt’s column has been shown to be full of factual errors.

The other risk he runs is an uprising by professional journalists against the likes of Rupert and Lachlan Murdoch, Gina Rinehart, John Singleton and James Packer for continuing to pay for his inflammatory opinions.

Some of these media rich listers may even withdraw their support or lose their own power to support Bolt.

After all, Hamish McDonald also told the Opera House crowd on Saturday that Max Uechtritz, the former head of news and current affairs at the ABC, has privately confessed to regretting giving Bolt a platform on Insiders 10 years ago.

Bolt, Day reveal why ACMA should move on Lachlan Murdoch

Bolt’s blog: why the apologies will continue

I’d like to see Crikey become a Bolt-free zone. I don’t read him, I don’t care about him, I don’t know why the Monthly felt they had to flog the dead horse of News Limited once again.

I’d like to see the media in Australia in general become a Bolt-free zone. But despite private misgivings by people like Uechtritz, he will continue to declaim at us all through print, television and on air because of ratings. Bolt really does say what a lot of people think – I wont write what that makes them – and it’s those people who boost the ratings of whatever media organ he’s being paid by. Controversy generates interest, interest generates ratings – in the commercial world that generates advertising and on the ABC it justifies their existence to budget wielding federal governments. Journalism, free speech, and all the rest of it – nothing compared to bums on seats.

I equate him to the Farting Preacher.

My faith has been restored! Thank you all!

Re the comment about Bolt on Insiders? I’ll start watching it when he’s gone! I can’t see any point in deliberately fouling up Sunday!

“It is alarming that in 2011 someone can be taken to court for expressing an opinion.”

The proof of the dumbing down of Australian society could not be more clear.