No beet-up, but Hun happy to throw meat in retail war

The Herald Sun has rejected conflict-of-interest concerns over its editorial coverage major advertisers, after some startling synergies heaped doubt on News Limited's hallowed journalistic division between church and state.

The Herald Sun has rejected conflict-of-interest concerns over its coverage of Australia’s major supermarkets, after some startling synergies cast doubt on its parent company’s hallowed journalistic divide between church and state.

“Coles has taken the butcher’s knife to its own brand sausages, mince, steak and chops, slicing prices by as much as $7 a kilo at its stores nationwide from today.” 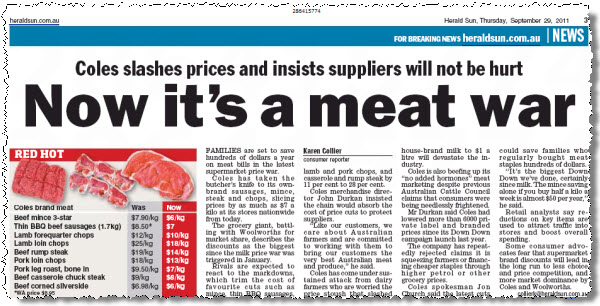 Lo and behold, over on page 16 and 17, those exact same dead cow deals popped up in Coles’ full colour ad, featuring that annoying “down down prices are down” red thumb thingy: 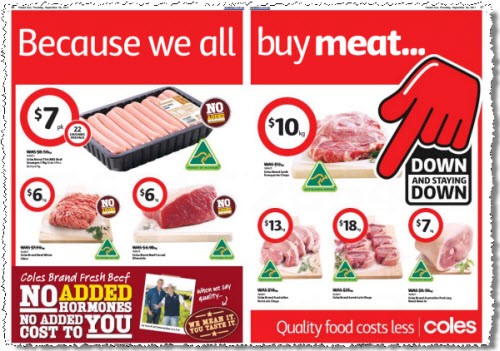 But Herald Sun editor Simon Pristel told Crikey this morning that any suggestion of a conflict of interest was “complete rubbish … we run stories criticising the major supermarkets all the time”.

According to ad data provided by research company Nielsen, Coles’ owner Wesfarmers stumped up a massive $93.8 million on total media advertising for its key brands last year, which also include Target, Kmart and Bunnings. Industry analysts estimated this morning that individually, Coles might be expected to spend about $3-5 million a year with the Herald Sun — but that the figure was complicated by the inclusion of the supermarket chain’s inserts in some editions of the paper, which are unaudited.

Woolworths outlays a similar amount — and as Stephen Mayne has repeatedly pointed out in Crikey, the Herald Sun seems loath to mention the connection between pokies king Bruce Mathieson’s ALH Group and Woolworths, given that Woolworths is its biggest corporate advertiser (Mathieson retired as ALH CEO last Friday, passing the baton on to his son, also named Bruce).

For example, two weeks ago A Current Affair and The Sydney Morning Herald both ran big with Smith’s strategy to buy beetroot crops from struggling farmers dudded by Aldi’s, Coles’ and Woolworths’ decision to sell cans of the shirt-staining root veg for 75 cents. 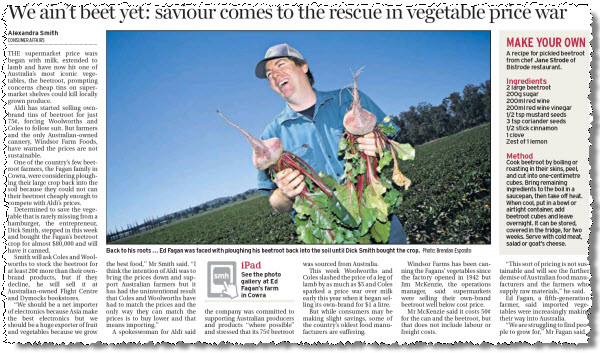 But the yarn was virtually ignored by News Limited, with only the Gold Coast Bulletin and Townsville Bulletin considering it worthy of a beet-up. Deliberate ignorance? The Herald Sun‘s Pristel was having none of it.

“Sorry to disappoint Mr Smith and his conspiracy theory,” he said. “That story was never on my radar, there was probably a few other things going on that day … it was never even discussed in conference.”

Smith said that 10 days ago The Sunday Telegraph had called him wanting to do a story on the outrageous $15.6 million pay cheque snagged by Coles chief executive Ian McLeod but that despite talking to a journalist for 20 minutes the story never appeared.

It is true the Herald Sun sometimes attacks its sponsors. On issues like CBD liquor crackdowns the paper can be reasonably consistent, if you forgive it for the hypocrisy in taking tens of millions each year from the alcohol industry.

On cue, in the same edition as the meat wars extravaganza, the little paper ran a story on the Australian Medical Association’s call for a cut in bottle shop hours directly adjacent to a colour one-pager from the late-opening 1st Choice Liquor Superstores. Credit where it’s due. 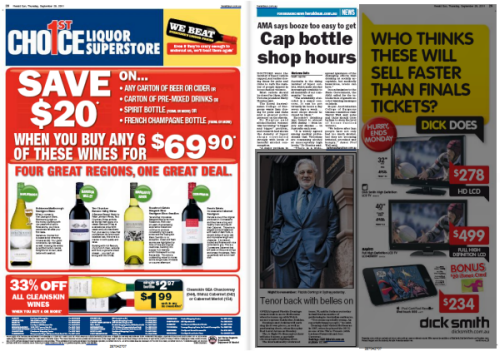 In search of profit, Coles Myer does a Woolies

Editors try to at least give some appearance of balance.