In today's Media Briefs: AFL beats NRL in grand final TV ratings ... 'Paedos in Speedos' -- it's a thing ... Portraits into the past ... Front Page of the Day ... The Department of Corrections ...

AFL beats NRL in grand final TV ratings. A hands-down ratings win to the AFL over the NRL at the weekend, thanks to a bigger metro audience, especially in the AFL heartland of Melbourne. While the AFL grand final’s national audience for the Collingwood-Geelong match was slightly better than last year, the NRL grand final’s average was the lowest for 11 years as Manly held off the New Zealand Warriors.

‘Paedos in Speedos’ — it’s a thing. One-time John Howard voter turned Dick Wynne supporter turned Richard Di Natale backer, Julian Burnside was quick to apologise for a tweet last week (now deleted) containing three words — “paedos in speedos”. Nothing to do with Tony Abbott, the respected silk said, simply a reference to a recent episode of UK comedy series That Mitchell and Webb Look. Razor-sharp columnists such as Miranda Devine were reluctant to believe him and The Weekend Australian ran with the “gaffe” on its front page (while getting the name of the show completely wrong). 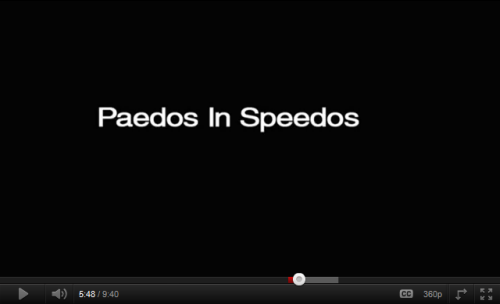 But it seems Burnside is on solid ground. In episode six of season four, the phrase is indeed splashed up on screen as part of a list of “sketches we weren’t allowed to do”. The others? Tourettes Pope, Hitler in Therapy, Taliban Ballet Ban, Behind the Scenes: Chinese Racism, The Black & White Menstrual Show and Rod Hull And Mossad. No sign of any of these pearlers on Burnside’s twitter feed … yet. — Andrew Crook

Front page of the day. The “Occupy Wall Street” movement took on New York’s Brooklyn Bridge yesterday, much to the enjoyment of the New York Post‘s subeditors: 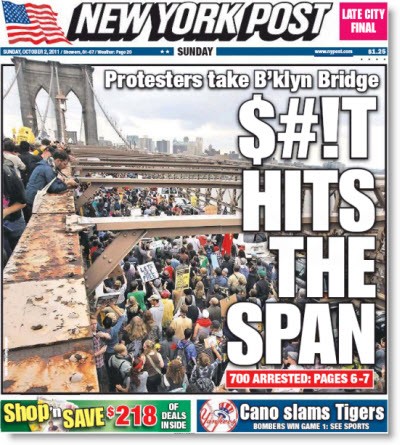 The Department of Corrections. When a bikie is not a bikie … and then an apology in Friday’s Gold Coast Bulletin: 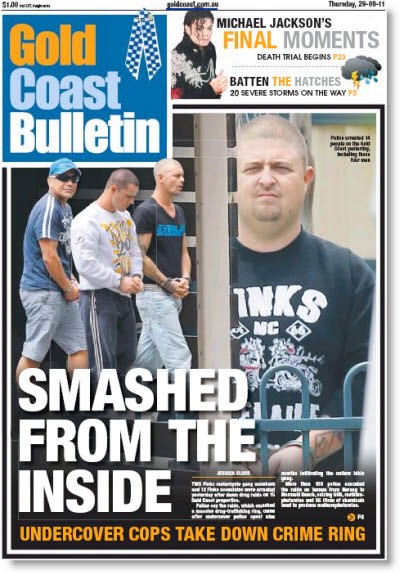 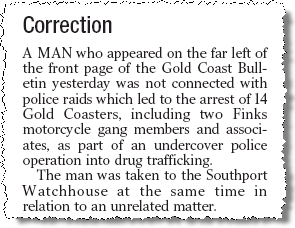 “Media-buying mogul Harold Mitchell will not run for the post of chairman of the ABC, despite being approached by a number of ABC staff to take on the role just 24 hours after the announcement that incumbent Maurice Newman will be stepping down.” — The Australian

“News presenter Ron Wilson will leave the TEN Network at the end of the year according to a media report today.” — TV Tonight

“The former News of the World chief reporter Neville Thurlbeck has threatened to blow the lid on the phone-hacking scandal, promising that the “truth will out” and “those responsible will eventually be revealed”.” — The Guardian

Gee you blokes cant count to well can you, the NRL ended up with 3.8 mil, the AFL was well below that,where on earth did you get the regional figure for the AFL ,still I suppose being Victorians you have to keep the AFL flag flying.
At least now you will only have to deal with 7 and Foxtel going to be interesting to see your excuses when the AFL dont do as well on Foxtel as they think they will

John, did you get your sums from the Tele or from Bolt? Or following the Tele’s lead by including New Zealand in ‘national’ figures, hell might as well just include ESPN in the USA….

Who cares about Foxtel, the money pits in the billion dollar FTA contract. The AFL aren’t slaves to their Foxtel masters like the NRL….