How do Catholic clubs defend their anti-pokies reform position?

The gambling industry is up in arms about the Gillard government’s proposed poker machine reforms. Clubs NSW is leading the charge but what about the Catholic clubs? asks gambling-reform blogger Tom Cummings.

The gambling industry is up in arms about the Gillard government’s proposed poker machine reforms; of course they are. Clubs NSW is leading the charge; understandable. But what about the Catholic clubs?

You see, there’s several registered clubs in NSW that are known as the Catholic clubs. They were started years ago, generally by prominent Catholic businessmen or parents from the local Catholic school, and grew to a point where they took on a life of their own. They are well respected, very successful and, as far as I know, still hold true to their original Catholic ideals.

Now I’m not going to say that there’s anything hypocritical about linking Catholicism with gambling. Bingo, anyone? There’s nothing wrong with gambling, in and of itself, and it certainly isn’t a sin. But what about problem gambling?

Remember, church groups across the country are concerned about problem gambling. Both the Victorian InterChurch Gambling Taskforce and the Australian Churches Gambling Taskforce support the Gillard government’s reforms and have repeatedly expressed their dismay with the tactics employed by the industry, Clubs NSW and Clubs Australia in particular, in fighting these reforms.

Many gambling counselling services are faith-based, and there is no doubt that the Catholic Church, like so many other religious organisations in this country, has seen its fair share of human carnage as a direct result of poker machine addiction.

The signs say “Catholic” but their bosses are Clubs NSW. All four of the Catholic clubs I listed above support the “It’s Un-Australian” campaign.

This was on the “What’s On” page of The (Castlereagh) Catholic Club website:

This was on the front page of the Campbelltown “King of Clubs” Catholic Club website:

This was on the front page of the Dooleys Lidcombe Catholic Club website: 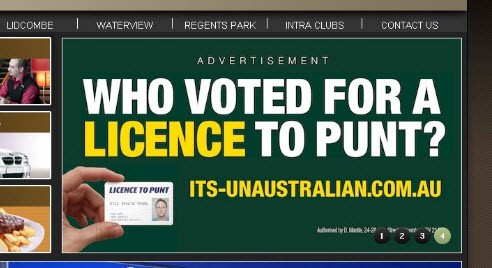 And this was on the front page of the Liverpool Catholic Club website:

Am I the only one who is appalled that these clubs, founded on Catholic ideals, are actively supporting a campaign that portrays its opponents as un-Australian? That places the blame for gambling problems squarely on the shoulders of poker machine addicts and absolves the industry? That plays politics with people’s lives?

Or for these clubs, is the word “Catholic” simply a remnant of a bygone time … a reminder of where they came from, but by no means an indicator of where they’re heading?

For me, it’s troubling on a personal level. Regardless of what I am now, I was born and raised Catholic. I went through the Catholic school system, participated in Catholic youth groups, heck I was even a lay minister for a while. I understand Catholicism.

But I don’t understand this.

There’s a famous story from the Gospels, about how Jesus threw the money changers out of the temple. I think these clubs have it the wrong way around.

Pokies lobby lets the cat out of the bag

Pokies: regressive, harmful and they never really pay out

This blog post called
“Stuff problem gamblers – I want cheap beer!”
is a mock letter from a poker machine supporter to Andrew Wilkie which highlights, in the clearest way possible, just how morally bankrupt the opposing position is.

Add one more to the list, Tom. We mustn’t forget Club Ashfield, also supporting the ‘unAustralian campaign, with family friendly trading hours of 9am to 6am – 7 days a week.

“There’s a famous story from the Gospels, about how Jesus threw the money changers out of the temple. I think these clubs have it the wrong way around.”

i was going to say this reminds me of that story, except without the main protagonist.

Spot on, Gibbot. A club that makes a big deal about its “annual mass and luncheon,” but opposes poker machine reforms aimed at helping pokie addicts and problem gamblers.

What? Catholics are hypocrites?? Surely not! That’s unAustralian!