Don’t underestimate the man in the hat

Underneath the hat there's a shrewd player of the political game and I think he'll prove it when his Katter's Australian Party offers itself to voters for the first time.

Not just a big hat. It takes a fair degree of political cunning to win a House of Representatives seat as an independent and even more to hold it for a lengthy period. Bob Katter, then, is clearly not someone to be laughed off as some kind of political jokester.

Underneath the hat there’s a shrewd player of the political game and I think he’ll prove it when his Katter’s Australian Party offers itself to voters for the first time. Its team at the forthcoming state election will ensure that the Queensland LNP does not quite have the walkover it has been expecting. 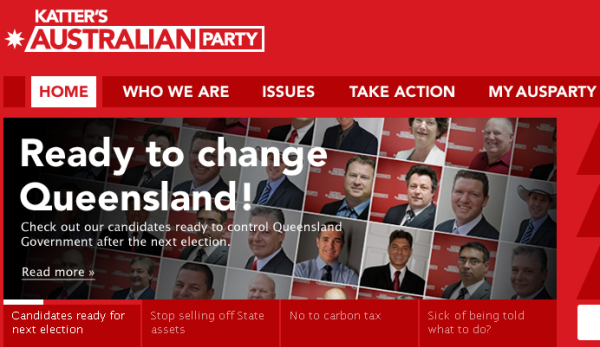 Meanwhile, back in Canberra, the Foreign Minister Kevin Rudd would do well to take the advice of his unlikely friend. This morning independent Katter argued that Labor would be “stupid” to change leaders before the middle of next year. “It doesn’t matter where they are at the moment, it’s where they are going to be in six months’ time or even 10 months’ time that counts. “If Kevin is out there for two years, the slings and arrows would come at him. So politics would dictate waiting till late next year.”

Being the good politician, and therefore not wanting to be taken for granted, Mr Katter was coy about whether he would vote to give a Rudd led Labor Government a majority in the House of Representatives if Tasmanian independent Andrew Wilkie withdraws his support if and when his poker machine law fails to win parliamentary approval. But in the end I would expect him to support his fellow Queenslander.

His state would expect it of him and last August while negotiations to form a government were at their height, Bob Katter was quoted thus:

Bob Katter said his decision to hand power to Labor would be a done deal. “If Rudd was still in the seat, it would be very hard to go against Kevin,” he said. …

Mr Katter said Mr Rudd had been an effective prime minister and he was a close friend.

Prime Minister Julia Gillard was not as effective as PM, he said.

“Julia has an awful track record. The only portfolio she held she stuffed up.”

Making a year unchanged? It is now almost 11 months since Australia last had a change in official interest rates – November 2010.

And the odds are favouring that the Reserve Bank board at its meeting tomorrow will keep the rate at 4.75% again. That’s certainly the way the Crikey Interest Rate Indicator is pointing. 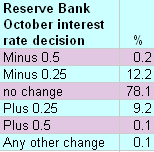 It is interesting how the punters are almost equally divided about whether a fall is more likely than a rise.

What finally happens is something that the Reserve Bank boffins cannot really even guess at. It will depend on what happens in other countries, not ours.

Is “Mr Hat” Katter any more than a conservative Coal-itionist in denial (suffering from relevance deprivation, who had to start his own party, like McLindon, to get that respect)?
Another “coalition government” for Queensland (KRAP, LNP : “Katter’s Really Angry Party/Limited News Party”), would surprise? We’ve seen what a “crap Labor” government can do.
Maybe that’s all we need – to be run by a “Katter tonic troupe”?

Can’t stop keeping the Rudd for PM debate alive eh Richard? You are as usual no better than the majority of your lazy media mates…oh of course the story is about Katter and Rudd, silly me. Would have nothing to do with your intense dislike of Julia Gillard?

Their website is worth a look, if only for OMG value.

They’ve endorsed 24 candidates – and 23 of them are white men! Aren’t they even going to pretend to have some diversity?