Crikey says: this movement might be something after all …

People are starting to pay attention to a growing movement in the US, and no it's not the Tea Party.

People are starting to pay attention to a growing movement in the US, and no it’s not the Tea Party.

Initially dismissed as a movement without a coherent message, Occupy Wall Street is turning into something more. Now into its 16th day, here’s a live cam fixed on the streets of New York City, currently pointed right at Brooklyn Bridge: 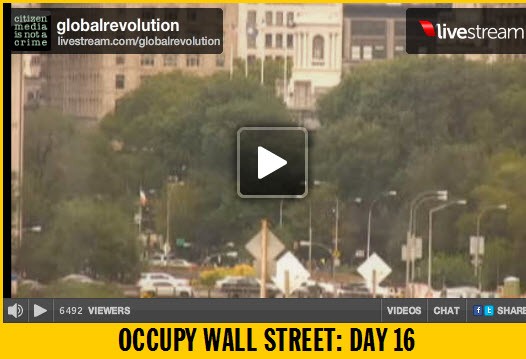 The movement self describes as:

“… a people powered movement for democracy that began in America on September 17 with an encampment in the financial district of New York City. Inspired by the Egyptian Tahrir Square uprising and the Spanish acampadas, we vow to end the monied corruption of our democracy … join us! We’re now in DAY 16.”

Essentially an expression of opposition to the economic inequality driven by Wall Street and its allies in Washington, the protests are bleeding from Wall Street to Washington DC, Chicago to Boston, LA to Denver and 100 other flagged locations. Their “Declaration of the Occupation of New York City” can be read here, but right now the headlines in the US are dominated by clashes between protesters and police in NYC. The key here? The movement is online.

As Micah L. Sifry at Tech President writes: “This thing is growing in internet time and no wonder, for it is built on networked culture.”

Meanwhile, here? Tumbleweeds. The most vexed economic debate is around whether or not the tax summit-forum-thingy is a waste of time or not and whether or not the Reserve Bank will cut interest rates, which, unlike the US, they have the luxury of doing. Either contrary to our politicians’ rhetoric we’re not hurting that much after all, or we’re just too lazy to take to the streets to say so. We’re going with column A.

The Oz TV networks don’t seem interested in this protest – why? Next to the death of bin Laden it could turn into the biggest story of the year.

As for our pre-occupation with the tax forum, let’s just say it IS a waste of time and turn attention elsewhere. There’s more important stuff happening – especially now the football has finished.

Congratulations! to these kids and all the people in this movement. Pity we are too lazy to get involved here in Oz. We could do with a bit of the “Arab Spring” ourselves. Up the revolution!!
Those who lost a lot of money during the GFC in this country – particularly people like us who retired six months ago – should be demonstrating against the financial wizards?? who are to blame. They benefited on the back of our losses. Amazing that these crooks just got richer, and nobody is doing anything about it.

I think the term bread and circuses springs to mind

Sadly the US have a long history of violently curbing any sort of “left wing” protest movement.
The charge by “hero” McArthur,in the late thirties, leading armed troops against the WW1 veterans encampment in Washington is only one of many instances of violent repression of dissent in the US. There will doubtless be another such if this gets too big.