CSG lobby fights back. Prepare for a rearguard action on coal seam gas. A Crikey reader landed on the grassroots-sounding website “We Want CSG”, which extols the virtues of the alternative energy source — which “can reduce greenhouse emissions by up to 70%, insuring a cleaner energy supply for Australia”. The lobby behind it? The […]

CSG lobby fights back. Prepare for a rearguard action on coal seam gas. A Crikey reader landed on the grassroots-sounding website “We Want CSG”, which extols the virtues of the alternative energy source — which “can reduce greenhouse emissions by up to 70%, insuring a cleaner energy supply for Australia”. 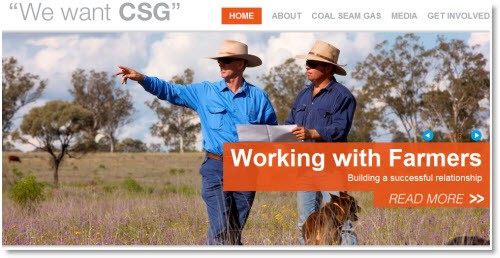 The lobby behind it? The Australian Petroleum Production and Exploration Association.

Firmspy not preparing for attack. “Game on,” says legal eagle gossip source Firmspy. But it hadn’t heard of our tip-off yesterday that they’re under the threat of defamation. “Nobody has put us on notice of any defamatory posting. If someone has taken issue with content written by us or one or our many commenters, they should use the complaint form and we’ll happily take it down. Defamation law should not be used as a weapon to silence the independent media.” Game on, indeed.

Stuchbury: I’ll see you at the pub. Departing Australian economics editor Michael Stuchbury (off to head up The Australian Financial Review) has left the building …

Stutch apologises for his abrupt departure and would love everyone to come and have a farewell drink while there’s still a bit of love around. From 7pm tonight at the Aurora. All welcome.

If you would like to contribute to a farewell gift for Stutch, please give your donations to Cassandra or Deirdre.

SMH makes a meal of recipe. First The Sydney Morning Herald reheated Neil Perry’s recipe. Then they twice-cooked the photo with a Kate Gibbs-cooked Moroccan Eggplant Salad. Now there’s questions about whether the Moroccan special is actually a Perry rip-off. A Crikey reader reports:

“The dish Kate Gibbs has chosen, Moroccan Eggplant Salad, is about as Neil Perry as a chef with a pony tail. Having worked for Neil for many years, this dish is almost a complete rip-off. Neil was serving this back in 1989 on the original Rockpool menu, and I think is still on the menu at his Bar & Grill. Has she hacked into the recipe file on his computer or something? Can’t wait to see what she serves up next.”

Age is free — with a feedback form. Here’s a new strategy for boosting newspaper circulation: give the newspaper away for free (sort of) and ask people what they like about it. A Crikey reader was door-knocked by a spruiker for The Age in Melbourne last night, offering a six-month subscription for just $99 (the paper was free, the seller insisted; the cost went to the newsagent for delivery). Apparently Fairfax wants to survey readers who DON’T read the paper, so it has targeted suburbs to offer the cheap sub and will then survey readers at the end of the trial. That’s a lot of free papers to be told readers might not like it …

Book signing or grand final? And from the 3AW Rumour File: “Caller ‘Ox is slow’ says if it is a draw at the AFL grand final tomorrow Collingwood assistant coach Nathan Buckley will be coaching in the replay. He says coach Mick Malthouse has been booked to do a book signing at Werribee Plaza.” Yeah … you’d reckon he might be able to get out of the book signing.

“We want CSG” is not a rumour. The Sydney Morning Herald has been running the ad on-line for the past week. The usual claptrap. Honest, working Aussies sticking up for the downtrodden mining companies, yet again. Gag.

the ‘We Want CSG’ campaign is no secret. The APPEA officially launched it earlier this month (they even released a statement) and it was widely reported.