Happy little Vegemites, cavoodles and free speech? Why it's time for Sideshow Alley, our weekly look at the political stunts and coverage that hamper national debate and distract us from the big issues.

Happy little Vegemites, cavoodles and free speech? Why it’s time for Sideshow Alley, our weekly look at the political stunts and coverage that hamper national debate and distract us from the big issues.

This was a week when a newspaper and its star columnist became the news, thanks to the Federal Court finding Herald Sun writer Andrew Bolt guilty of breaching the Racial Discrimination Act.

Media outlets  — yep, including Crikey, we’ll admit it — were dominated by stories about the case. But a special Sideshow Alley shout-out must go out to Bolt’s own home paper, the Herald Sun, whose front page yesterday decried the end of free speech … 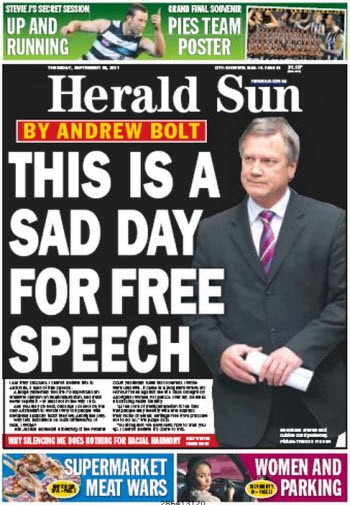 As reader Ross Sharp wrote on Crikey‘s Facebook page: ‘”A sad day for free speech”. What a load of crap.”

But it was the opposition’s reaction that peeved other readers.

Katie Miller: I await Tony’s announcement that he will be supporting amendments to the terrorism legislation that makes it an offence for people detained without charge under the Act to tell anyone about it.

Opposition legal affairs spokesperson George Brandis said the Coalition would change the Racial Discrimination Act if elected: “We would not like to see the law remain in its current form as currently interpreted.” How ironic, says one Crikey reader:

It was an amusing slip. Sadly it was also a major news story, appearing in all major news bulletins and papers.

But considering it’s such an important week for the Prime Minister, it’s only fitting that stories about her take out the Sideshow Alley awards this week. And when we say “important”, we’re of course referring to Julia Gillard’s 50th birthday and her new cavoodle puppy, a gift from her partner Tim.

We had Gillard posing in front of a novelty oversized cupcake: 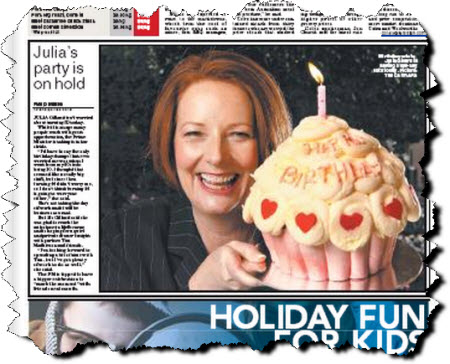 Gillard spent the big day visiting a school, where she got given a sparkly hat, cupcakes and plenty of kids saying “happy birthday!”. But Abbott wasn’t quite as warm on the birthday wishes. “I wish her a happy birthday,” she said. “I’m not sure how many more she is going to have in The Lodge.”

Leigh Bentley: I reckon Abbott speculating on the number of birthdays Gillard will have in The Lodge was pretty ungracious; maybe even crass.

But the cavoodle deserves a special mention. ”Tim’s caught on quickly — he’s recognised that in Labor Party politics, if you want loyalty, get a dog,” quipped opposition frontbencher Bruce Billson. And that’s not accounting for the all chatter about the type of dog cavoodles are and how suitable they are for The Lodge.

@DblRistretto: The lazy electorate hoovering up tosh in lieu of substance — AGAIN!

Final word goes to Crikey reader Mel Kendall: “Wouldn’t it be highly refreshing if no one could find a ‘most irritating Oz politics media coverage or shameless political stunt’ to comment on … but then that’s not likely is it?”

The extraordinary assault on Andrew Bolt

Crikey says: get real on freedom of speech

I’m always shocked when Tony Abbott is ungracious and crass, shocked I tell you.

Maybe he should get some lessons in manners from Joe Hock … no, wait … from Christopher Py … um, wait a sec … from Sophie Mirahhh … this is, um …

So under a “Brandis-Abbott-Murdoch government consortium” we’ll have no Censorship Board?
There will be more “Bill Henson” type exhibitions?
And the ABC will be free to do what it does – free of fear of “Coal-ition (government) criticism”, and subsequent funding cuts or appointees to “board memberships”?
Or will the final say be up left “to the Minister” – to adjudicate on “good taste”?

I think you mean to link to this Tony Martin‘s twitter feed.

Is it Tim? Is it Julia, is it Julia’s whole office? They all have tin ears. Any good press they might get from the puppy (is Julia home enough to look after a puppy? Is the puppy a Julia-substitute for Tim? FFS!) will be drowned out by the massive faux pas of getting a ‘designer dog’ from a puppy factory.

They’ve been told that if it’s a mixed breed, no self-respecting breeder does that. These cutesy dogs – through no fault of their own – are produced by money-grubbing scumbags called puppy farmers. Know anything about them? Enough people have called Gillard’s office to tell her about it. Check out http://www.oscarslaw.org if you don’t know what they are. Dogs are left in their own filth to breed, deliver, and die. Open rescue groups have found mothers with dead pups stuck in the birth canal, unattended. Mother dogs have been found eating their own young, so starved and sent mad by cruelty and deprivation.

Why, oh why, couldn’t Julia and Tim go to an animal shelter and adopt a dog, thereby lifting the profile of shelters that do amazing work, often rehabilitating the cast offs from puppy factories – the lucky ones that survive their hellish lives in these stinking holes.

I’ve had it with this government. The puppy was the last straw. Sorry puppy, it’s not your fault.

Well good on you for repeating comments from those happy about the judgement. I have a view about it but I’ve been moderated out of the discussion in Crikey’s brave new world of free speech.