Daily Mail caught out stealing. When leftie hero/mascot Johann Hari was pinged for plagiarism, interview confection, sock puppetry and the rest, few were more gleeful than that voice of the vein-standing-out-on-the-neck Right, the UK Daily Mail. But Hari’s unmasking has stimulated an appetite for checking out shady behaviour in the UK press, and the latest paper to be pinged is … the Daily Mail, for a recent piece which was 90% plagiarised from a piece in Slate.

Since it’s about the half-dozenth time that the paper has been accused of lifting material from the toobs, a full-bore crowdsourced investigation is now beginning. Licensing the piece for reprint would have cost a coupla hundred quid. The final bill may prove to be much more …  — Guy Rundle

Cut/Copy paste. Someone at The Age has mixed up Sydney electronic duo The Presets with Melbourne electronic collective Cut/Copy. Ah, whatever, they were so 2005 anyway … 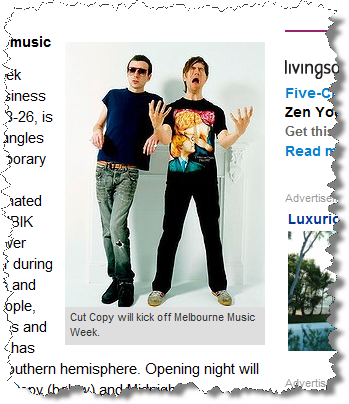 Front page of the day. Europe’s rescue fund for debt-bound nations won a crucial vote of confidence from German lawmakers and German newspaper Der Tagesspiegel had its Chancellor, Angela Merkel, giving it the thumbs up: 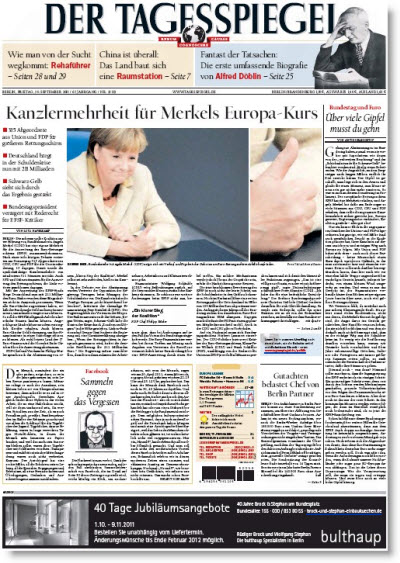 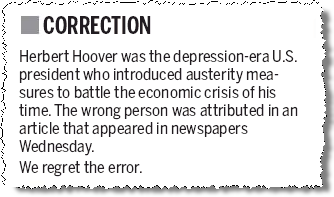 “One of the two journalists who uncovered the Watergate scandal has said that he was “struck by the parallels” between the News of the World phone-hacking affair and the saga that brought down Richard Nixon in the 1970s.” — The Guardian

“The ABC will pay tribute to the ABC news crew killed in a helicopter crash near Lake Eyre by re-airing their final documentary Return To Lake Eyre this Sunday. Journalist Paul Lockyer, cameraman John Bean and helicopter pilot Gary Ticehurst died after the helicopter that was returning them from Lake Eyre crashed on August 18.” — The Australian

The Michael Wolff era at Adweek is over

“Media bomb-thrower has been editor of Adweek for less than a year. Earlier this month, rumors began circulating that he would soon be replaced. Now, we hear, Wolff’s days at Adweek are definitively coming to an end.” — Gawker

Facebook will never charge you to use it — here’s why

“The rumor that Facebook will suddenly start charging users to access the site has become one of the social media era’s perennial chain letters. Given the ubiquity of these rumors, we thought it was worth exploring their origin — and why we can guarantee Facebook will never charge you to use its service.” — Mashable

So Carl Bernstein reckons Nixon thought he himself (and thus those working for him) was above the law, too?