Kevin Rudd, it seems, is not unique.

Happy little vegemites. Kevin Rudd, it seems, is not unique. Just as the Foreign Minister this week proclaimed himself to be a happy little vegemite, so too do 78% of Australians aged 18 years and over claim to be satisfied with their lives. The Australian Bureau of Statistics brings the happy news in the summary findings of its General Social Survey report released this morning. 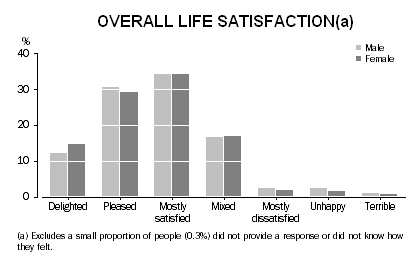 The Bureau’s Overall Life Satisfaction measure provides an indication of how people regard their life as a whole, reflecting their experience in the 12 months preceding the survey interview and their expectations for the future. In 2010, 43% of people aged 18 years or over were pleased or delighted with their life and a further three in ten people (34%) were mostly satisfied and together, very similar to the 76% of Australians as reported in the 2001 ABS National Health Survey. 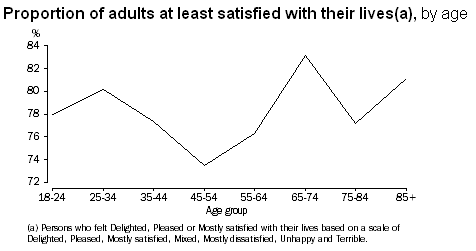 Less definite predictions. I’ve written it before, I know, but the advice the famous old Age and SMH political correspondent Ian Fitchett gave me when I first started reporting from Canberra is worth repeating for the benefit of this pair of authors of predictions this morning: 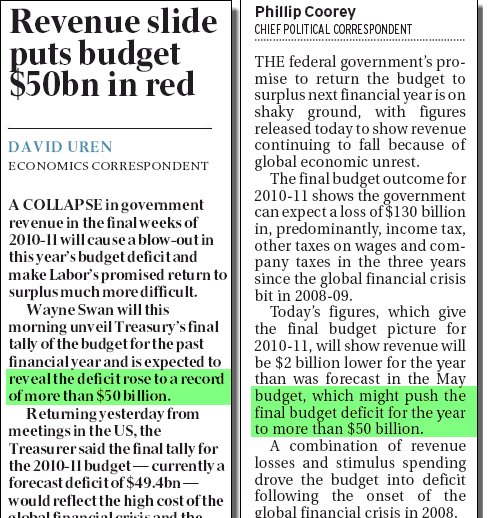 The closer it gets to an event the less definite should be your predictions. People remember your mistakes when you make them on the eve of an announcement but give you little credit when you are right because they assume someone told you anyway.

And so it as that Treasurer Wayne Swan announced this morning that the final budget outcome for 2010/11 was an underlying deficit of $47.7 billion.

House sitting and electricity use. It was the ABC’s 7.30 program this week on poker machine addicts being recruited by the drug industry that made me take a second look at a research paper titled Energy Up in Smoke – the Carbon Footprint of Indoor Cannabis Production. With my pot smoking days generally well behind me I had not caught up with the burgeoning business of growing the lovely weed inside suburban houses with gambling desperates often employed as minders of the crop.

Any initial scepticism I had about whether the 7.30 crew were gilding the lily a bit disappeared when I stumbled across Dr Evan Mill’s paper. He describes how the emergent industry of indoor Cannabis production in the USA has become a significant consumer or electric power and hence is responsible for considerable CO2 emissions. 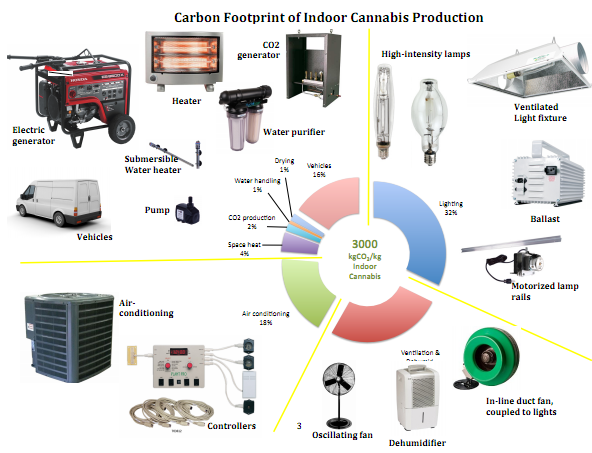 Large-scale industrialized and highly energy-intensive indoor cultivation of Cannabis, writes the good doctor, is a relatively new phenomenon, driven by criminalization, pursuit of security, and the desire for greater process control and yields. The practice occurs in every state, and the 415,000 indoor plants eradicated in 2009 represent only the tip of the iceberg.

He calculates that based on a rising number of consumers (6.6% of U.S. population above the age of 12), US national production in 2011 is estimated at 17,000 metric tons, one-third occurring indoors.

…  In California, the top-producing state, indoor cultivation is responsible for about 3% of all electricity use or 8% of household use, somewhat higher than estimates previously made for British Columbia.

The emissions associated with one kilogram of processed Cannabis are equivalent to those of driving across country 5 times in a 44-mpg car.

Just a little something for you to think about when you light your next joint.

Savage put-down of Australia’s Alcohol Policy Coalition. The members of the International Scientific Forum on Alcohol Research are not people like me. They are a group of physicians and scientists who are specialists in their fields and claim to be “committed to balanced and well researched analysis regarding alcohol and health”. I’m a heavy drinker by most definitions who used to sell the product and whose brother still makes some delightful examples of it in the Barossa Valley. So I stress that it is them, not me, that has made the assessment that a document entitled Cancer, Cardiovascular Disease and Alcohol Consumption released by a group known as the Alcohol Policy Coalition in Australia is “A misguided statement on alcohol and health”.

The Alcohol Policy Coalition (APC) describes itself as “a coalition of health agencies who share a concern about the level of alcohol misuse and the health and social consequences on the community.” Members of the APC are the Australian Drug Foundation, Cancer Council Victoria, Heart Foundation (Victoria), Turning Point Alcohol and Drug Centre, and VicHealth.

The International Scientific Forum on Alcohol Research says its members were surprised by the publication of what they considered to be a biased and unscientific statement.

As one reviewer stated: “It is shocking that an alliance of organizations, some of which are government agencies, would agree to stand behind such a deliberately misleading misrepresentation of the science addressing the effect of alcohol consumption on human health.” In the opinion of Forum members, the paper disregards the vast majority of well controlled studies which show significant and concrete public health benefits of moderate alcohol consumption. “Instead this Position Statement conflates the effects of excessive and moderate alcohol consumption, and in so doing creates confusion and concern, with the apparent purpose of advancing a prohibitionist agenda.” It would be important to bring an honest appraisal of the best science forward for the purpose of improving public health, a mission not achieved by this paper.

Another dire warning. The predictions of another financial system collapse keep coming. Today it is the turn of The Economist with a cover picture of a financial black hole. 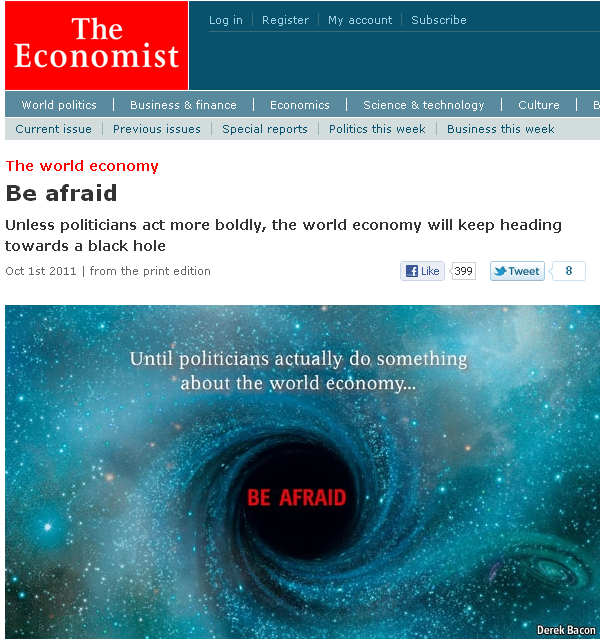 In its leading article the magazine gives three reasons why the glimmers of hope financial markets saw amid speculation that Europe’s leaders had been bullied by the rest of the world into at last putting together a “big plan” to save the single currency would likely fade.

First, for all the breathless headlines from the IMF/World Bank meetings in Washington, DC, Europe’s leaders are a long way from a deal on how to save the euro. The best that can be said is that they now have a plan to have a plan, probably by early November. Second, even if a catastrophe in Europe is avoided, the prospects for the world economy are darkening, as the rich world’s fiscal austerity intensifies and slowing emerging economies provide less of a cushion for global growth. Third, America’s politicians are, once again, threatening to wreck the recovery with irresponsible fiscal brinkmanship. Together, these developments point to a perilous period ahead.

Wish it was here! Freddie Mac, the US mortgage maker, announced overnight that fixed mortgage rates fell to all-time record lows this week – 4.01% for a 30-year fixed-rate mortgage and 3.28 percent for a fixed 15 year loan. Want to take a risk on something flexible? Then how about paying 2.83 percent for a 1-year Treasury-indexed hybrid adjustable-rate mortgage?

Going faster in Britain. As figures from Queensland police suggest that a speed camera site south of Brisbane has raised a whopping $5 million, and likely much more, in just two months, motorists might wish that their government follows the British example where the speed limit on major highways is to be increased from 70mph (112.7kmh) to 80mph (128.7kmh).

Taxing fat in Denmark. The day of the fat tax has arrived. From tomorrow Danes will pay a tax on saturated fat charged at the rate of DKK 16 per kg saturated fat on domestic and imported food. The tax will apply to meat, including chicken and pork, as well as to cheese, butter, edible oils, margarine, spreadable products and other food such as snack products. Products with saturated fat content at or below 2.3% will not be included.

Aha! That’s why Danish butter is being promoted in supermarkets in Oz.

On alcohol and health. There are big problems with the position of the International Scientific Forum on Alcohol Research, who makes it their aim to ‘savage’ alcohol information that doesn’t suit their agenda.

1. There is a glaring conflict of interest – enough in itself to render their critique as unreliable. The International Scientific Forum on Alcohol Research is a ‘joint undertaking’ of ‘Alcohol in Moderation’ in the UK and the ‘Institute on Lifestyle & Health’ of Boston University School of Medicine in the US. Both are in part funded by ‘companies in the alcoholic beverage industry.’ The Boston Uni institute is also funded by ‘associations of grape growers and wine growers and wineries.’ So, not only is promoting alcohol-in-moderation their agenda, but the two players behind the forum must presumably do so to receive continued sources of funding from alcohol-producing companies.

2. ‘Moderate drinkers’ as a group tend to contain settled, stable, affluent-enough individuals, whose health statistics are likely to be comparatively good anyway. It is difficult to separate out alcohol consumption from the mix.

3. Alcohol (ethanol) is essentially a toxin, apart from anything else. On basic principles, it is difficult to see how daily alcohol consumption could be beneficial over no alcohol consumption, which is what the forum is promoting. Logically, it would mean that in their view, alcohol could be considered an essential daily nutrient. No one else goes along with that idea.

@OPTI, I was doing a bit of digging on the group but didn’t come up with much, so thanks. They do smell like a front organisation if only by the virtue of the over the top name.