In last Tuesday in Media Briefs, Glenn Dyer wrote about how The Sydney Morning Herald’s Good Living lift-out rehashed a Neil Perry recipe that not only appeared on Perry’s Rockpool website but also in The SMH’s sister lift-out Good Weekend. It now appears this story has a second helping.

An anonymous foodie contacted Crikey, alerting us today to the fact that Good Living and in particular Kate Gibbs’ column has decided to twice-roast itself over the same lamb recipe. Last week an image appeared in Gibbs’ recipe that our anonymous foodie would have sent back to the kitchen. You see, last week’s pictured dish appeared to have no lamb in it. Which makes sense after seeing Gibbs’ column this week in which the featured dish is Moroccan Eggplant Salad … 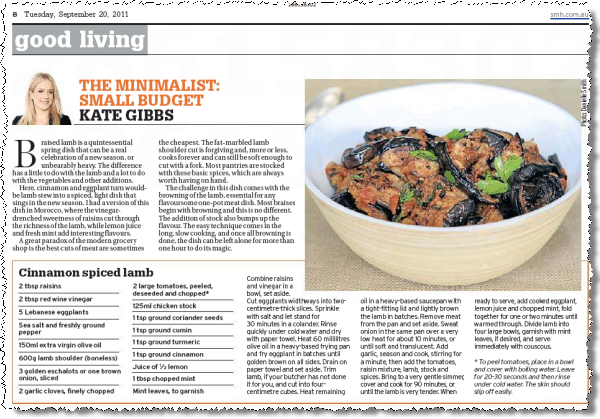 The Good Living column from Tuesday September 20. Is that lamb? 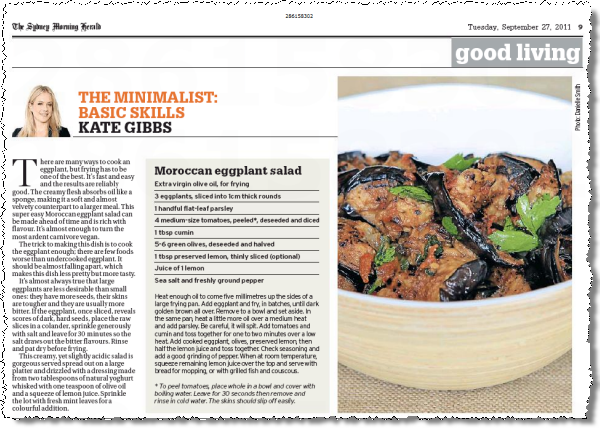 The Good Living column from Tuesday September 27. Where have I seen that dish before?

So last week’s unattributed-Neil Perry-inspired Cinnamon Spiced Lamb recipe looked terrible because the photo of the dish was in fact Moroccan Eggplant Salad, which was the recipe that Good Living ran this week. And they used the same photograph again this week that they used last week. They sure are running a tight kitchen at The Sydney Morning Herald.

Don Burke vs. Donna Hay: a storm in a vegie pot

Crikey Roadtest: the Snuggie, the blanket with sleeves