Some evidence this morning from the Australian Bureau of Statistics of the coming shortage of construction and mining workers.

The coming shortage. Some evidence this morning from the Australian Bureau of Statistics of the coming shortage of construction and mining workers. Over the last year the number of job vacancies for construction workers has increased from 13,500 to nearly 24,000. In mining the hump is from 7,100 to 9,900. 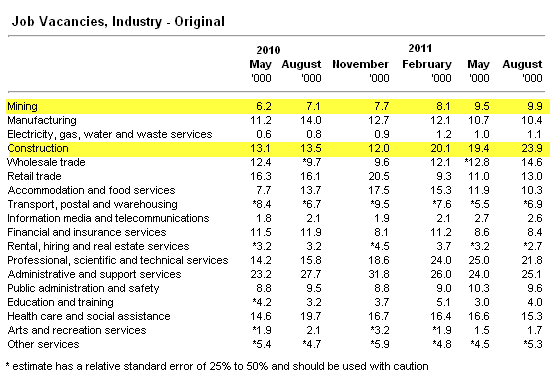 Yesterday BHP Billiton predicted that the resources boom will create 90,000 continuing jobs by 2016, and demand for temporary construction workers will peak at 80,000 in 2014.

Over the little hurdle. European efforts to avoid an immediate meltdown of the financial system look like succeeding. In Finland the parliament has voted to provide its share of the next bailout of Greece and the expectation is that Germany will do the same thing tonight. But don’t be fooled into thinking that the crisis has passed. There’s merely been a stay of execution.

From Martin Wolf in The Financial Times of London this morning:

The financial crisis that broke upon the world in August 2007 has entered a new and, in crucial respects, more dangerous phase. A positive feedback loop between banks and weak sovereigns is emerging, with a potentially calamitous effect on the eurozone and the global economy: the eurozone is no island.

The frightening analysis is well worth reading.

And if that does not depress you enough have a glance at the interview which the Washington Post’s Ezra Klein had with Desmond Lachman, a resident fellow at the American Enterprise Institute and a former managing director and chief emerging market economic strategist at Salomon Smith Barney and deputy director in the International Monetary Fund’s Policy Development and Review Department.

According to the IMF, Greek debt will peak at 172 percent of GDP, and a dangerous level of debt is 80 percent or 90 percent. So to think Greece won’t have to write its debt down by 50 cents on the dollar, you have to be smoking something. I would be surprised if the Greeks don’t default on their debt within six weeks, and at that point, they will probably leave the euro. But a Greek default would be the largest sovereign debt on record. And the concern is that if Greece defaults, there will be a contagion to Portugal and Ireland and Spain and Italy, so the Europeans are trying to get this $2 trillion bazooka ready so they can ring fence Greece.