With a bag of polling data bursting at the seams, it’s that time of year again where we not only update our Pollytrend metrics.

With a bag of polling data bursting at the seams, it’s that time of year again where we not only update our Pollytrend metrics, but run some election simulation goodness to see how the polling data for the past three months would have played out if it was reflected in any hypothetical election.

We have the usual Newspoll and Nielsen polls for the simulations, plus a Galaxy for Queensland, a couple of unpublished national polls  and unpublished NSW and Victorian polls — giving us an aggregated sample size just shy of 15,000 over the quarterly period from July 1 to last Tuesday. (Made up of about 11,900 from the published and 4000 odd from the others — where there’s nothing significantly different in those unpublished jobbies that we aren’t seeing in Newspoll, Nielsen and Galaxy anyway, it just tightens up our uncertainty a bit.)

First up, the trend measures …

Last month’s Pollytrend update saw a small movement back to Labor — small, but the largest movement towards it that it had experienced since the election last year. Suffice to say, that movement back to the ALP troughed out and is now in slight reverse. 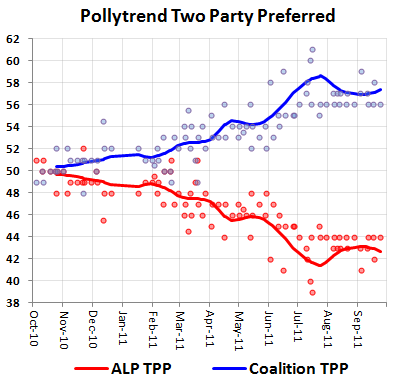 The current point estimates on the trend have the Coalition sitting on 57.3% to Labor’s 42.7% on the two-party preferred.

On the primary vote trends we have Labor bouncing around in palliative care on 28.3, the Coalition hanging around 48.7 and the Greens moving up a point or so over the past month to come in at 12.3. This gives us a whopping 9.7% primary vote swing against the government, washing out into a 7.5% two-party preferred swing towards the Coalition (off the back of a 5.1% primary vote swing towards the opposition). The Greens meanwhile are slightly ahead of their 2010 election results by 0.6%.

Looking at the longer term primary vote trends, we get:

Nothing particularly exciting there (especially if you happen to be the ALP), except to note that the big ALP crunch on the primary vote came back in the May-July period and has been pretty much faffing about ever since. That primary vote level is roughly what we saw Labor achieve at the last NSW state election and, barring Campbell Newman getting caught riding a Citycycle naked through Queen Street Mall in the middle of a crack bender, it’s similar to what we’ll also see Labor achieve at the upcoming Queensland state election.