Kwark still saving the old world. Gather round children while we tell you a tale. A long time ago in a far away place called Australia, in a time called “postmodernism” there was a wizar-academic called McKenzie Wark. “Ken”, “Kwark” variously described, railed furiously against all “left conservatism”, any notion that the disappearance of the old world — work, neighbourhoods, cities, nature — was something to organise over. When people spoke of people’s lives being turned upside down, Kwark responded “we don’t have roots, we have aerials!”.

Fast forward 15 years, and Kwark has found a superposition, as professor in New York, postmodern hog heaven, from whence comes this tweet:

Yeah, ain’t that the breaks? You work so hard to get where you want to be decrying those who would resist the brave new world — and then everything that makes it, well, real, starts to disappear, because the city becomes a wasteland of aerials. New rule: a fogey is a postmodernist whose bookshop is closing. It’s amazing how slow on the uptake some people are (still, it’s a great bookshop, do sign the petition). — Guy Rundle

Front page of the day. The trial of Conrad Murray, Michael Jackson’s doctor at the time of his death, began overnight in Los Angeles. UK tabloid The Sun spared no column inches in its edition today, devoting not only pages 4, 5, 6, 7, 8 and nine but also a graphic front page: 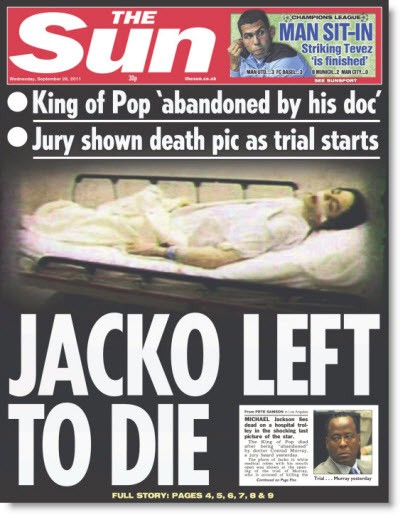 The Department of Corrections. To be sure. Yesterday’s Guardian corrected the record on mistaking Ireland’s population in 1845. 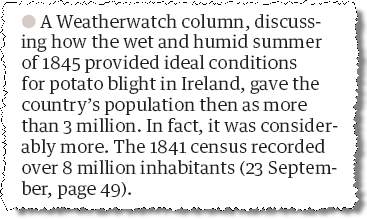 “A decision on the much-delayed Australia Network contract is imminent with the item listed as an agenda item at Monday’s federal government cabinet meeting.” — The Australian

Sun has questions to answer on phone hacking

“A Labour MP has alleged that phone hacking at News International has gone “far beyond the News of the World” as he claimed that the Sun newspaper is also implicated in illegal practices.” — The Guardian

“A News Corp unit that used lessons gleaned from gangster films to motivate employees and crush rivals is the latest arm of Rupert Murdoch’s media empire to be swept up in a probe that began with hacking and bribery allegations.” — Sydney Morning Herald

No decision on At Home with Julia

“The final episode of At Home with Julia will air tonight as planned — episode four of a total of four. While it’s true that six episodes were planned in early stages when it was under consideration for ABC2, only four were commissioned.” — TV Tonight

Orwell Prize will not pursue Hari over money

“The financial backers of the Orwell Prize have decided not to pursue Independent columnist Johann Hari over the money he won as part of the 2008 award, despite the prize organisers concluding that his submission plagiarised the work of others.” — journalism.co.uk

In real-time, journo tweets are ‘raw draft’ of history

“When historians look through the Library of Congress’ Twitter archive years from now, Andy Carvin’s tweets will be among those that help tell the story of the Arab Spring.” — Poynter

the 3 million figure is more like the reduction in population, being 1.5 diaspora and 1.5 deaths from the famine, and also English criminal neglect, given Ireland was a net export of food in the form of the landlord’s crops.