He’s baaaack. It’s looking decidedly like a three horse race, at least in volume of coverage terms, with the Prime Min…er, I mean Foreign Minister, getting three quarters of Julia Gillard’s coverage this week.

He’s baaaack. It’s looking decidedly like a three horse race, at least in volume of coverage terms, with the Prime Min…er, I mean Foreign Minister, getting three quarters of Julia Gillard’s coverage this week off the back of some claims from the top end (geographically, not politically) of overheard conversations plus a misspoken word from the man himself. But to cut the press gallery some slack, with polls like these you’re going to get stories like this, no matter how much meat is actually behind them.

Euromoney magazine voted Wayne Swan best finance minister in the world last week and even that couldn’t get him into the top three. One indicator of the bizarreness of Australian politics is that if you stepped back and looked at the facts and figures, you would presume the man the PM would have to be looking over her shoulder at is the Treasurer, just like every other PM before 2007. But poor old Swanny’s not even a contender.

The increasing yet highly predictable hysteria over making some limited attempts to stop poor people from throwing away all their money … sorry … I mean contentious poker machine reforms, pushed Andrew Wilkie all the way into the top five. It would be interesting to know how many Liberals have sympathy with Wilkie’s reforms, is it possibly higher than the number in the Caucus who are wild about them? 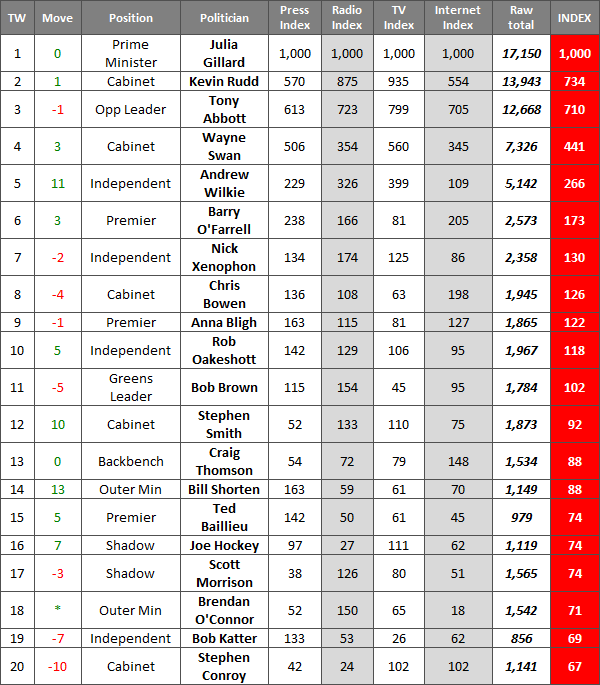 Speculation that Kevin Rudd was going to challenge Julia Gillard for the PM spot had talkback and online social media buzzing with conversations. Despite this, political experts were adamant that Rudd might have popularity with voters he certainly doesn’t have the same respect in the caucus.

If your name is Swan, you’re looking pretty good to win just about anything at the moment, while everyone debates whether you really are one of the greats or just in the right place at the right time.

Abbott, Xenophon and Katter all down the rankings. Stand by for some awesome stunt work in the coming week.

Is it too much to ask for the dipsticks in the Big Media to explain why they think Kevin Rudd would make a better prime minister?

I don’t mean if he has the numbers or not. Whether he would be better. And if that is not the job of the commentariat, then what the hell is their job actually, or am I right in thinking they are mostly blowhards with no real analytical skills?