I published my first piece of journalism in 1992. It was a story about the Aboriginal Housing Company in Redfern. In the last 20 years, I have used my skills across publishing mediums and literary genres to write positive stories about Aboriginal Australia with the aim of building bridges between black and white communities.

On April 15, 2009, with a flick of his pen, Andrew Bolt in his article ”It’s so hip to be black”, managed to burn down many of those bridges, by writing words about me (and others) that discredited me professionally, while also offending, insulting and humiliating me. People on his blog also made racist remarks, that also offended, insulted and humiliated me.

I have always identified and lived as an Aboriginal woman, I’m a Williams from Cowra, a proud member of the Wiradjuri nation.

Mr Bolt’s article suggests I made a “decision to be Aboriginal” which “was lucky, given how it’s helped her career” and that I had “won plum jobs reserved for Aborigines at Koori Radio, the Aboriginal and Torres Strait Islander Arts Board and Macquarie University’s Warawara Department of Indigenous Studies”.

What Mr Bolt failed to mention is that I am an established writer and highly qualified with a PhD in Media and Communication, and that in fact none of the jobs he mentioned were actually “reserved” or identified Aboriginal positions, and the Koori Radio role was actually voluntary and unpaid.

In his witness statement to the court Mr Bolt claimed to have used a photo of my mother on her wedding day as evidence to determine she, therefore I was of mixed-heritage and could not or should not identify as Aboriginal. The photo Bolt submitted was taken directly from my blog and a post I made on February 7, 2011, almost two years after he wrote his article, so his misrepresentations about me continued.

As former Chair, Deputy Chair and Committee Member of the Australian Society of Authors, I have long advocated and been part of campaigns to protect the rights of Australian authors. At the same time, I have always advocated for responsibility in writing, and an ethical approach to publishing.

I am pleased (although not surprised) with the judgment handed down today by Justice Bromberg in the Federal Court of Australia. I believe the result means that Australia will have a higher quality and more responsible media, and that to some degree the persecution of Aboriginal people in the press will be lessened. And that was why I chose to be part of this case. Australian readers also deserve better.

I thank my legal team: barristers Ron Merkel QC, Herman Borenstein SC, Claire Harris, and Phoebe Knowles, my solicitors Joel Zyngier and Nathalie Dalpethado (Holding Redlich) and Aislinn Martin (Tarwirri). I’d like to express my heartfelt gratitude for their tireless efforts in seeking justice for not only the named applicants but all those Aboriginal people who were reasonably likely to have been offended, insulted, humiliated or intimidated by Mr Bolt’s writings.

I am continuing to focus on what I love doing most, working with young Aboriginal people around the country and teaching them how to write their own stories, in the hope they too will one day have the position of privilege to publish their own words.

Finally, in the words of Dr Rosie Scott, award-winning author, former Chair of the ASA and former Vice-President of PEN Sydney – an organisation who fights for the rights of imprisoned writers who don’t have the ‘free speech’ we so readily enjoy:

“Free speech is the cornerstone of genuine democracy, but when writers publish disinformation dressed up as fact, lies as truth, slander as objective evaluation and call it free speech, they are devaluing its very essence and betraying all those who’ve fought for it.” 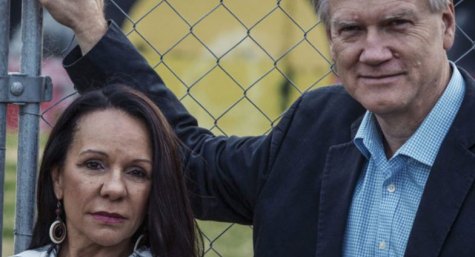 Why Andrew Bolt has a place on ABC TV: recognition doco executive producer

Bolt on trial: Herald Sun wants to publish the lot

Yes about devaluing free speech, but I’m still unconvinced that the scalpel of rebuttal would not have been better than the sledgehammer of legal action in this instance.

Indeed! As a non-aboriginal woman I was elated by Judge Bromberg’s decision, and congratulate all concerned. As you’ve stated Anita, let’s hope this decision lets all journalists know, that racial vilification is indefensible – always! I hope that any appeal has the same outcome as today!

I find racism in all its forms repugnant and injurious to those who are insulted. It should not be part of a legitimate conversation in this county, or any other for that matter.

A great day indeed! Again, Congratulations to all involved! You possibly heard my loud ‘yippee’ when I heard the news!

While it is perfectly understandable the Bolt, News Limited and their respective sympathisers will argue that this is a blow to freedom of speech….nothing could be further from the point. The court ruling upholds the pre-eminence of facts as the basis for news reporting and opinionising in the media. It has done nothing more and nothing less. The absence of facts from Bolt’s published crticisms on race issues is the reason that he violated the Racial Discrimination Act.

If the facts are too difficult to establish then bite your tongue.

I too am delighted with this judgement. All Australians are entitled to honest balanced journalism. Anyone who uses racial slurs in a cynical attempt to increase their profile should be condemned and prosecuted. As if we didn’t see enough of that last century to our great cost.

I think Dr Scott said it all and congratulations to Anita and friends. I don’t think Mr Bolt knows what real journalism is.