While the extravagantly wealthy Collingwood greedily campaigns for the right to continue fleecing unfortunate poker machine addicts, their opponents in Saturday's AFL grand final are acting like true sports people.

Not talking through its pocket. It’s surely enough to make sensible people back Geelong. While the extravagantly wealthy Collingwood greedily campaigns for the right to continue fleecing unfortunate poker machine addicts, their opponents in Saturday’s AFL grand final are acting like true sports people. 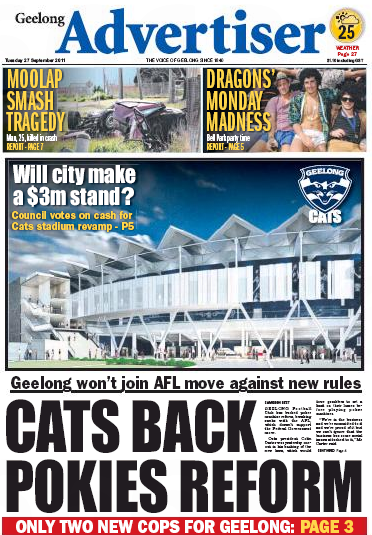 Cats president Colin Carter was yesterday one-out in his backing of the new laws, which would force gamblers to set a limit on their losses before playing poker machines.

“We’re in the business and we’re committed to it and we’re proud of it but we can’t ignore that the business has some social issues attached to it,” Mr Carter said.

“Our footy club has a pretty strong commitment to being a good citizen off the field and so sticking our head in the sand is not in our long-term interest.”

Mr Carter fired a salvo at his Magpie counterpart, Eddie McGuire, who suggested the reforms amounted to a “footy tax” which could seriously hurt AFL clubs.

“That’s ridiculous to even call it that, that is complete nonsense,” Mr Carter said.

I, for one, will be calling “carn the Cats” on Saturday afternoon. Not that I really needed another reason to oppose Collingwood!

You beauty! More excuses! Just what the news editor ordered. A slip of the tongue by Kevin Rudd and we can keep the leadership challenge yarn running. Leading the bulletins, no less! 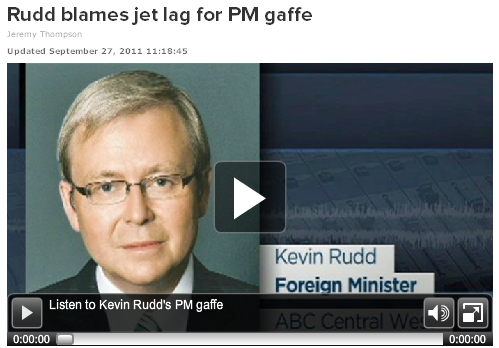 Foreign Minister Kevin Rudd has done nothing to dampen speculation about Labor’s leadership by describing himself as “prime minister” in an ABC radio interview in provincial New South Wales.

Asked about recent polls showing he would lead the embattled Labor to an election win, Mr Rudd said: “You know what? I’m a happy little vegemite being prime minister.”

Even more exciting than Bruce Hawker, the man who wears the three hats of Sky News commentator, lobbyist and Labor Party campaign adviser, stating the obvious yesterday that, in the face of polls showing Labor well behind,  you could make a case for the party changing leaders.

Our future in their hands? The Independent this morning carries a report of an interview with a financial trader who created something of a stir by telling the truth. 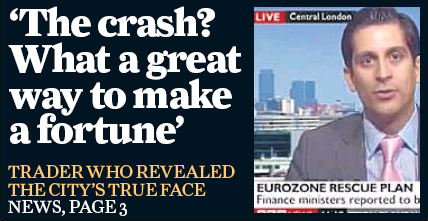 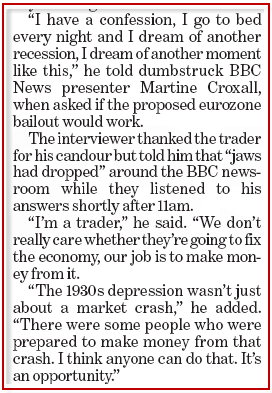 At Der Spiegel they are covering a new study at the University of St. Gallen that finds the behaviour of stockbrokers is “more reckless and manipulative than that of psychopaths.” 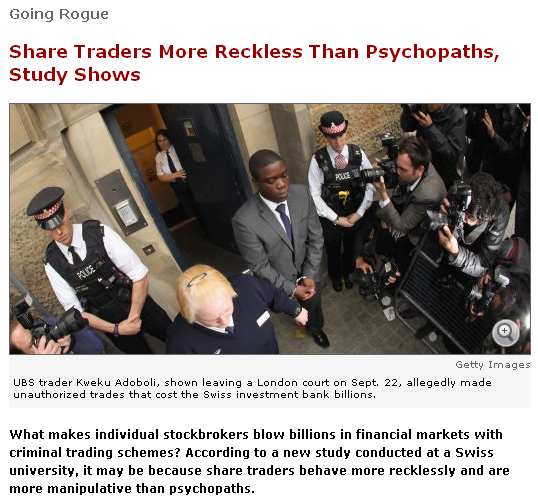 Researchers at the Swiss research university measured the readiness to cooperate and the egotism of 28 professional traders who took part in computer simulations and intelligence tests. The results, compared with the behavior of psychopaths, exceeded the expectations of the study’s co-authors, forensic expert Pascal Scherrer, and Thomas Noll, a lead administrator at the Pöschwies prison north of Zürich.

“Naturally one can’t characterize the traders as deranged,” Noll told SPIEGEL. “But for example, they behaved more egotistically and were more willing to take risks than a group of psychopaths who took the same test.”

Or maybe it’s in their’s! The rally overnight in stick exchange share prices is being put down by the commentators to a judgment of rational people to news of a financial rescue plan being devised for trouble European countries. Believe that if you want to but a recent BBC story suggests the recent ups and downs are the work of what they call algorithmic high frequency trading platforms

According to this version of the state of the financial markets, investment decisions are no longer being made by financiers, “but increasingly by PhD mathematicians and the immensely complex computer programs they devise. Fundamental research and intuition are being usurped by algorithmic formulae. Quant trading is taking over the world’s financial capitals.”

Many true words are sung in jest. From the movie South Park Bigger, Longer & Uncut:

We must stop dirty language from getting to our children’s ears! We must go find the source of it.

But what is the source? 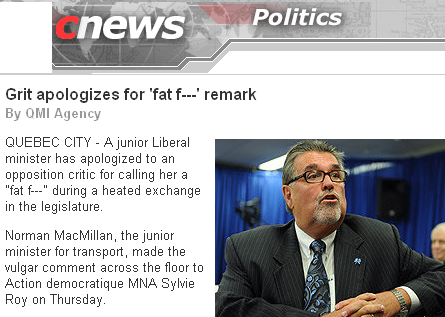 C News puts the comment into a longer context of Canadian political remarks with this summary:

1971: Prime Minister Pierre Trudeau allegedly tells Conservative MP Lincoln Alexander to “f-ck off” in the Commons. Outside the House, Trudeau famously denies using the f-word, claiming that he had said “fuddle duddle.”

1985: Conservative MP John Crosbie tells Liberal MP Sheila Copps to “quiet down, baby,” prompting Copps to retort: “I am a member of Parliament … I’m not his baby, I’m nobody’s baby, and I’d like him to withdraw those remarks.” Copps later entitles her autobiography Nobody’s Baby.

1997: Liberal minister Doug Young, responding to Reform MP Deborah Grey’s criticism of pension plan changes, blurts out: “I’ll tell you what. There’s more than a slab of bacon talking there.”

1997: Reform MP Ian McClelland tells Sheila Copps, “Sheila, that was a sh-tty thing to do and confirms you are one b-tch.”

All of which demonstrates the wisdom behind this South Park clip: 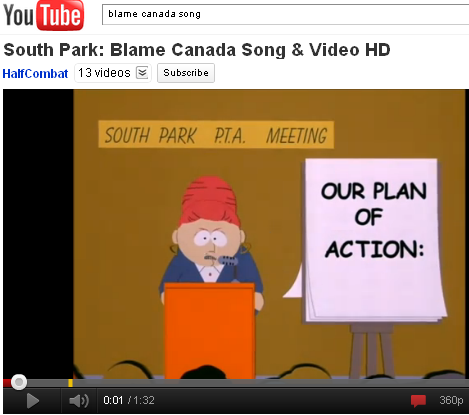 The news bite, not the debate, is what matters

Why do so many politicians talk to journalists – we already have a pretty fair idea of how dumb they are, and like living on the edge, why do we need more proof?

Never heard of MP Sheila Copps but, if she was getting tories that het up from 1985-97, WELL DONE! And from Opposition!