Why the media debate doesn't hold water, a dash of class war in today's Front Page of the Day and other media news from around the globe.

Front Page of the Day. There’s nothing wrong with a bit of tabloid class war, courtesy of today’s UK Daily Mirror: 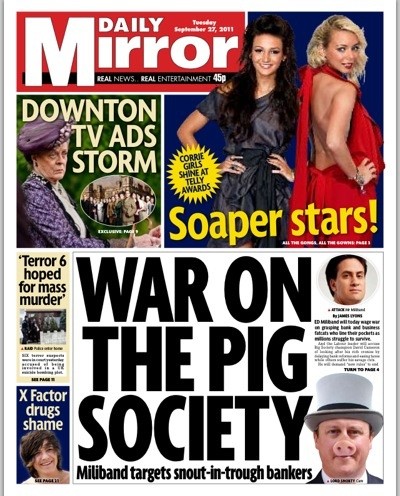 The Department of Corrections. Is it ironic that, from a story titled “The experts got it wrong”, The Australian had to run a correction today for getting it wrong?

“Journalists guilty of gross malpractice should be struck off a professional register to prevent them working in news, the shadow culture secretary will suggest at the Labour conference on Tuesday.” — The Guardian

Aunty “has lost her way” on TV programs.

“ABC TV programs such as Crownies and At Home with Julia, which were made by independent companies, should never have been commissioned by the public broadcaster, a federal parliamentary inquiry heard yesterday.” — The Australian

A video game that offers a war correspondent’s perspective.

“Go to war, follow leads, collect footage, and edit a news story. That’s the premise behind Defiant Development’s Warco: The News Game, which gives users a new take on the ‘first-person shooter’ genre popularized by games such as Call of Duty, Fallout, and Gears of War.” — Forbes

“The protracted conflict between ****** ****** and Warner Brothers Television ended quietly on Monday when the two sides agreed to settle a lawsuit the actor filed after the studio fired him from the hit CBS sitcom, Two and a Half Men. — New York Times

“A new Pew Research study, released Monday morning, paints a fresh and detailed picture of “How People Learn About Their Local Community.” But among a broad range of findings, one paradox stands out.” — Poynter

And the media all pretend to care about the few that drowned but imagine if the Kenyan government said to the tens of thousands of Somalis crossing their borders every month “some have starved, you must all stay home”.

And presumably all starve.

This bullshit about people smugglers though is what drives me the craziest because there are no people smugglers. They might assist people without visas across borders but mostly they do not see them again, unlike traffickers and actual smugglers who use their victims as slaves or buy and sell them. In the case of asylum seekers all over the world they are only paying for the transport and nothing else.

The protocol against smuggling says it is quite legal and forbids any form of punishment but we punish everyone.