It's truly amazing how Melbourne-based Nick Leys' account of Leckie's "robust delivery" at the Sydney launch matched so similarly -- identically, in fact -- to TV Tonight's David Knox. Plus other media news.

In taking aim at his rivals, he said: “The other mob, Channel TEN’s got one show, a cooking show. Channel Nine’s got the yo-yo show.” Presumably it was a reference to Nine’s schedule …

But it was Leckie’s robust delivery that drew puzzled looks — a mix of outbursts, forgetfulness, humour and occasionally indecipherable words.

And from today’s Media Diary in The Australian:

In Melbourne, he told buyers and advertisers of his rivals’ shortcomings: “The other mob, Channel Ten has got one show, a cooking show. Channel Nine has got the yo-yo show.” Presumably that referred to Nine’s schedule. In Sydney also, Leckie’s robust delivery drew puzzled looks — a mix of outbursts, forgetfulness, humour and some indecipherable words.

Bolt extinguishes his light. Here’s a blog item from a well-known member of the Australian commentariat.

I know there’s now Amazon, but I’m not sure it’s doing much business in Dandenong, either:

“THE City of Greater Dandenong has 140,000 residents, 49 schools and 117 supermarkets and grocery stores. But it doesn’t have a bookstore.”

Who’s this inner-city cosmopolitan, pouring elite scorn on ordinary people? Why it’s Andrew Bolt, portraying a whole swathe of suburban Melbourne as illiterates. Ah well. It’s not as if they form his core readership or anything. — Guy Rundle

Front page of the day. You can’t go past NT News for a kooky animal yarn. This time it has managed to fit a snake and a kangaroo in the one photo. We know what you’re thinking. Good get, but where’s the croc? Standards are slipping … 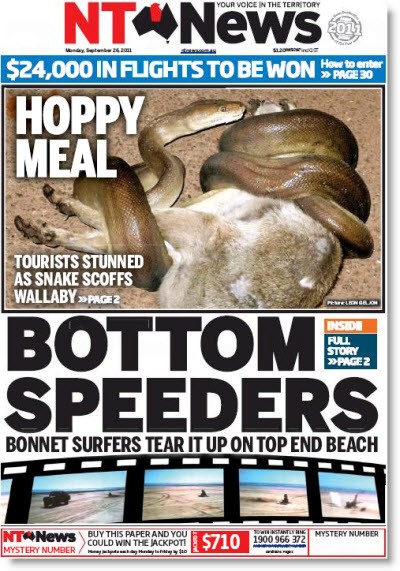 “A raid on Nine staff by the ABC has prompted an unusual call from Nine chief executive David Gyngell to ABC managing director Mark Scott. Mr Gyngell had an “amiable” conversation with Mr Scott and asked him to tell his executives to cease and desist stripping his promotions department of staff.” — The Australian

“Prosecutors in Mexico say the decapitated body of a woman found in the northern city of Nuevo Laredo on Saturday is that of a newspaper editor.” — BBC

“The Wall Street Journal is about to get a new look, one that will bring more color to the traditionally staid business paper, and that could help it attract advertisers.” — Adweek

“Printed newspapers are shedding readers much faster than Greenland is losing ice, even if you take the Times Atlas’s controversial (now withdrawn) estimate of Arctic shrinkage. People such as me (and you, if you’re not reading this online) are melting away from “quality” newspapers at a rate not far below 10% a year.” — The Guardian

Magazines begin to sell the fashion they review

“While the glossies have long had a reputation for accommodating the designers they cover, sometimes guaranteeing coverage to those who advertise in their pages, a wave of new ventures and partnerships suggests they are willing to go even further by selling the designers’ clothes.” — New York Times

He could say the same for Wodonga – except for a recently opened second-hand – but it doesn’t have the coded meaning for his readers. You know, migrants.

I’m sure the libraries in the city of Greater Dandenong stock a lot more books than whatever those bookstores used to have. Now if only we have the statistics on the sort of readership there!

It took me about 15 seconds to google 7 bookshops claiming to be in Dandenong. Perhaps they are out of bounds to the good citizens of Greater Dandenong