Bringing home the top half

Much more comfortable. The Coalition’s shadow immigration minister Scott Morrison strikes me as a much happier fellow now that he has a boat people policy that has some semblance of principle about it. He has looked far more comfortable in his public appearances since being able to argue for off-shore processing only to be allowed in countries that are signatories to the UN refugee convention. He is fast emerging at the top of the list of the next generation of Liberal Party leaders.

When the people won’t pay. A large part of the financial mess that is Greece is the result of the Greek people making an art form of tax avoidance. The black economy has run riot for years and income tax for many outside the bloated ranks of the public service appears to have been an optional extra. Yet despite this terrible record, the politicians from the European countries drawing up the plans to prevent the total financial collapse of Greece keep assuming that the new taxes they are demanding will somehow prove different and actually be collected.

A number of articles I have read over the weekend suggest that this will prove to be wildly optimistic. Der Spiegel under the headlines We won’t pay: Greece’s Middle Class Revolt against Austerity writes of a movement of business people whose “absolute refusal to pay any taxes resembles an uprising of the ownership class, rather than the working class, a rebellion of the self-employed business owners who have long been the backbone of Greek society.” 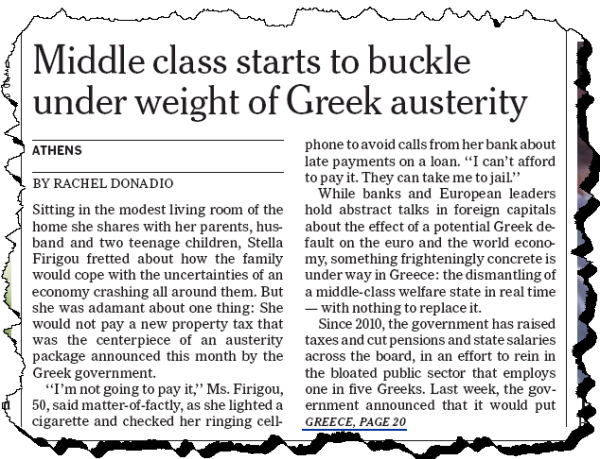 Bringing home the top half. They’ll soon be putting the Farnese Hercules together again. Turkish prime minister Tayyip Erdogan returned home from the United States at the weekend with the top half of the Weary Heracles sculpture to rejoin the bottom half at a museum in the Turkish Mediterranean city of Antalya.

Safe Corner blog, which features items of cultural heritage in danger, says the statue of Hercules (who leans wearily against his club after performing his Labors) is a textbook illustration of dubious provenance: ownership attributed to the dealer’s mother who got it from some other dealer before her, right from the start. But, “[t]he best evidence for pillage … is the fact that the upper half of the torso was unknown to the world before 1981,” wrote Roger Atwood in the book Stealing History:

What we do know about the statue is that it was discovered before 1980 at Perge, near the Turkish town of Atalya, by looters who took the upper half, which was then smuggled and sold to the US collectors Leon Levy (now deceased) and Shelby White in 1981, and the Boston Museum of Fine Arts, where it remained on display for many years.

Even though the two halves fit together perfectly, the Boston MFA continued to deny Turkey’s claim, earning the museum a place on Colin Renfrew’s list of “quite disgraceful” museums for “supporting and financing the destruction of the world’s archaeological heritage.”

Richard:
1. Scott Morrison as leader of anything – YUK! He might have just made leader of the fascist party in any number of European countries in the 1930-40’s. Heaven help us if he is the future of the so-called Liberal Party.

2. I frequently listen to the BBC (on ABC News Radio) at night, and have been following the disaster which is Greece for some months. What I have heard is that the ordinary workers who are demonstrating in places like Athens tell the BBC they don’t see why they (as taxpayers) should bear the costs of the “rich” who caused all the problems in the first place. They blame the banks (mostly), and the government for proping them up with taxpayer’s money. They know that the rich don’t pay tax, and see the whole situation as grossly unfair. I understand that what happened in Iceland has been responded to by the “ordinary people” in much the same way.

They definitely have a point. Something about capitalising the profits and socialising the losses, maybe? It is heartening to know that the ordinary folk in these countries are finally standing up to the rich and powerful. Good on them. Bring on the revolution, I say!!