Investors are panicking, with world markets in freefall after a gloomy Federal Reserve outlook yesterday renewed fears of a global recession.

Wall Street is down more than 3%. As Christine Hauser reports in The New York Times:

“The downcast mood appeared to be reflected across the board. Stocks fell in Asia, Europe and on Wall Street, where equities were down more than 3 percent as the market closed. Bond prices soared for a fifth consecutive trading session, pushing the United States benchmark yield to new lows. Commodities such as oil and precious metals retreated, as the dollar ground higher.”

Investors are moving out of stocks and investing in the US dollar, writes Brendan Conway in The Wall Street Journal. He explains some of the other defining factors in the latest crash:

“A weak reading on manufacturing in China contributed to the slowdown fears. Adding to the grim mood was a lack of appreciable progress in containing Europe’s debt crisis, which has weighed on markets for months”

The Aussie dollar plunged to 10-month lows this morning, tumbling below parity, explains Thomas Hunter in The Age:

“Overnight, the Australian dollar slipped to 96.92 US cents, more than two and a half cents down from yesterday’s 5pm close of 100.18 US cents, and off five US cents since Wednesday. The last time the local unit languished in the 97 US-cent range was in early December, 2010. The dollar was recently changing hands at 97.4 US cents.”

World Bank president Robert Zoellick demanded the major economies take decisive action. “Europe, Japan, and the United States must act to address their big economic problems before they become bigger problems for the rest of the world,” said Zoellick, at the beginning of the annual World Bank and IMF meetings. “Not to do so is irresponsible.”

In a speech to Canadian parliament, UK Prime Minister David Cameron warned that the world is nearly “staring down the barrel” of global financial upheaval:

“The problems in the eurozone are now so big that they have begun to threaten the stability of the world economy,” said Cameron. “Eurozone countries must act swiftly to resolve the crisis.”

Cameron acknowledged that it’s difficult for growth right now: “The recovery out of the recession for the advanced economies will be difficult. Growth in Europe has stalled, growth in America has stalled. The effect of the Japanese earthquake, high oil and fuel prices is creating a drag on growth. But fundamentally we are still facing the aftermath of the world financial bust and economic collapse in 2008.”

The Guardian editorial is demanding swift and radical movement by government:

“Where the world answered Lehman Brothers’ demise by rallying together, it has now wasted a year fracturing into 100 varieties of austerity. The effects are becoming plain.”

The Huffington Post was typically subdued in its front-page coverage: 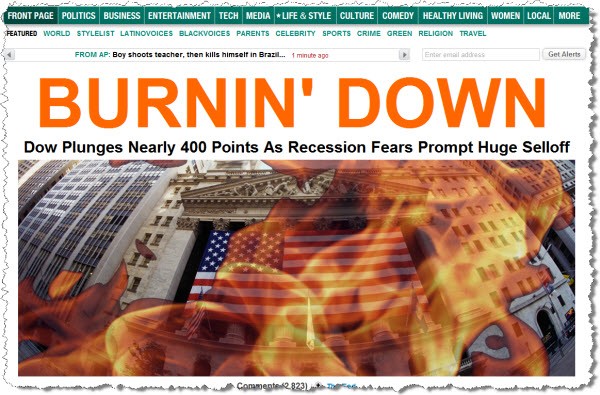 For Australia this means bye bye surplus. I feel sorry for Mr Swan and the Labor team. No oeriod of economic calm to enable a return to surplus. We can expect the conservatives to claim this proves economic ineptitude, despite the evidence to the contrary.
Worse however I thik we are headed towards a world Great Depression. Eurozone going down. In the US the Tea Party wagging the Republican dog is going for another government shutdown. So more credit downgrades to be exprxted.
Even China is slowing.
We seem to be repeating the early 20th century history. This time no world war to rescue the economic gloom.

GUYTAUR
This time no world war to rescue the economic gloom.

Time will tell on this front. You should never underestimate the actions of people who have lost everything. I expect to see civil unrest rise to intolerable levels in numerous nations and on the back of that a ‘world war’ could be waged by ‘the authorities’ against ‘the insurgents’. And where will “the Authorities” get their weapons and soldiers? Haliburton. Time will tell.