There's no way we outsiders can know whether "she said" or "he said" is the more accurate version but at best it is rather flimsy evidence.

Let us start with the home town version, although we do have plenty to choose from. Leadership stories are all the rage in the morning papers and on the radio and television news and I confess to getting sucked into the frenzy yesterday by writing a completely irrelevant snippet under the line Sniping at Kevin … 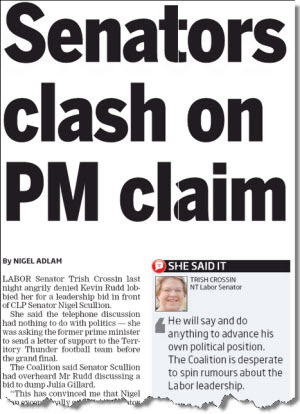 A Coalition senator from the Northern Territory, the CLP’s Nigel Scullion, wandered into the office of NT Labor senator Trish Crossin and heard her talking on the phone to Foreign Minister Kevin Rudd in a call that either she had placed (her version) or taken (the version peddled to journalists by the Coalition). She says the conversation was about getting Rudd to send a message of support to the Territory Thunder football team before they played a grand final. He says (or rather other Coalition MPs are quoted as saying he said) that the Crossin-Rudd conversation was about Rudd challenging Julia Gillard for the prime ministership.

According to Senator Crossin the subject of the overheard phone call came up again in conversation with Senator Scullion when the pair shared a drink a few nights later. She told him she had phoned Kevin about the letter for the Thunder but “he kept saying, ‘wasn’t it about the leadership?”‘

Now there was a time when politicians regarded chats over a drink as being private and the information gained from the occasion treated as sacredly as the confessional. But no longer. In this new Tony Abbott age of “anything it takes” this civilised convention has been discarded along with providing pairs for parliamentary votes. Parliament House will be a nastier place because of it.

So what of the leadership challenge? There’s no way we outsiders can know whether “she said” or “he said” is the more accurate version, but at best it is rather flimsy evidence. Rudd knows the rules of Labor leadership challenges well enough by now, having won one and lost one over the last few years. And one thing you don’t do is go ringing for votes yourself when you are thousands of miles away in New York.

So I’ll go with the “this is a huge beat-up” version of events and put this morning’s stories into the same false alarm category as my own comment yesterday that “the appearance in the Sydney Daily Telegraph of the comments about Kevin Rudd’s travel expenses makes me think there might just be something in all this leadership speculation!”

Note to Senator Crossin :- maybe you’ll be crossin’ Nigel’s name off your “best friends register”, and confine your drinking with “pickled scullions” to those in the martinis, in your cups?
Doesn’t he have form with “drink”, in a restricted area, from a previous occasion?